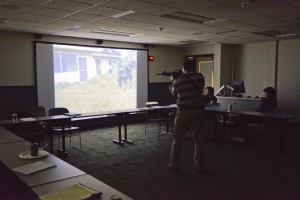 Rob Miller, manager of the Police Academy at KCC, demonstrates the use of the MILO training system during a recent Law Enforcement Advisory Committee meeting at at the college.

A new advanced training simulation tool at Kellogg Community College will allow Police Academy students the ability to hone their skills in threat recognition and conflict resolution without them ever leaving the classroom.

The college’s new MILO Range training system from IES Interactive Training was installed late last summer for approximately $40,000 awarded through a Parker’s Fund grant. The simulation offers participants a first-person-shooter experience, with conflict scenarios played out in videos displayed on a wall-sized screen that responds to lasers fired from various law enforcement tools, including weapons.

Rob Miller, manager of the Police Academy at KCC, said during a recent demonstration of the system that the training will be used primarily to teach cadets threat recognition, how to read a suspect’s hand movements or body language to gauge the threat level of a particular situation.

“You can use it to create more scenarios, hand and body positioning, threat recognition; it’s just one more training tool,” Miller said of the system. “The most important thing is it exposes students to shoot/don’t shoot scenarios without having them in live-ammunition scenarios.”

The live-ammunition scenarios come later in the program, when the cadets will role play using live “sim” rounds similar to paintballs. Near the end of their training they’ll use firearm rounds on targets at a gun range.

The MILO training is beneficial because it allows for training in a controlled classroom environment, Miller said, and it features more than 180 use-of-force simulation scenarios, both lethal and non-lethal. Participants can incorporate stun guns, pepper spray and flashlights into training scenarios in addition to traditional handguns and rifles.

Miller said while the system will mostly be used for instruction at the college beginning this spring, the hope is to expand its use this summer for training use by local law enforcement agencies.