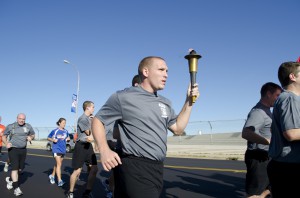 Kellogg Community College team members participating in this Saturday’s Battle Creek Polar Plunge have raised more than $1,300 worth of pledges to support Special Olympics Michigan through the event, which will see the “plungers” jump into the icy waters of Goguac Lake beginning at noon.

Rob Miller, manager of the Police Academy at KCC and organizer of the KCC team, said in addition to the dozen or so KCC employees jumping for the team, he also expects the majority of the 16 cadets in the college’s Police Academy to take the plunge during the event.

It’s the second year KCC has participated in the event, Miller said, but it’s the first year he’s sought to expand participation beyond the Police Academy and include the college as a whole. Last year’s team raised $1,500, and he hopes to beat that amount this year.

“It goes to a good cause,” he said. “It’s an opportunity to make a difference in our community, and it also gives us a chance to have some fun.”

Click here to view KCC team members registered to raise pledges through FirstGiving for Special Olympics Michigan through the event. To donate, click on an individual team member’s name and follow the instructions.

Support envelopes can also be picked up in the Criminal Justice Program offices on the third floor of the Lane-Thomas Building on KCC’s North Avenue campus, 450 North Ave., Battle Creek.