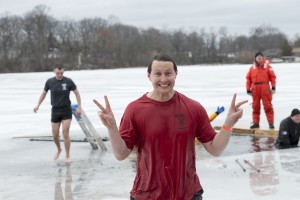 A team of more than a dozen jumpers from Kellogg Community College raised$2,480 for Special Olympics Michigan through the Battle Creek Polar Plunge by jumping into the icy waters of Goguac Lake on Saturday.

Miller organized a team consisting of Police Academy students for the event last year and expanded the team this year to include KCC staff.

“As I watched each of our team members take the frigid plunge, I was again reminded of how proud I am to be a member of Kellogg Community College,” said Miller, who jumped into the lake twice.  “I want to thank everyone who donated money to support such a wonderful cause. Way to go KCC!”

Several KCC students and employees also came to the event to support the team, which raised close to half of the nearly $5,500 total pledged through the event.

Click here to view more than a dozen photos from the Battle Creek Polar Plunge on KCC’s Facebook page.