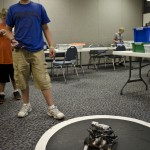 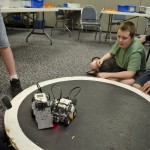 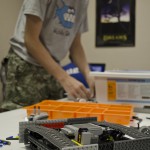 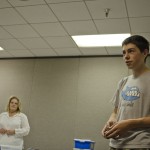 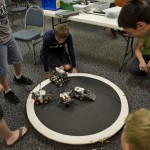 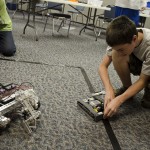 Ask 13-year-old Patrick Carattini what career field he wants to go into when he’s older, and the answer might surprise you. On a recent afternoon, the Battle Creek youth didn’t bat an eye when talking about a future in genetics or working with nanobots, artificial limbs, or brain implants that could be engineered to help the disabled.

That day, however, Carattini’s skills were being put to a use perhaps more common to a middle school boy: building with Legos.

More specifically, Carattini and seven other boys his age were using Legos to build robots as a part of the “Beyond Science Fiction: The World of Lego Robotics” STEM camp hosted by Kellogg Community College’s Lifelong Learning Department. It was day three of the four-day course, and the kids were putting final touches on their “sumobots,” robots built for the purpose of pushing each other out of a circle in a way similar to the way people do in sumo wrestling.

While many boys his age were perhaps spending their afternoon at home, watching TV on the couch or goofing around with their friends, Carattini sat in front of a laptop, addressing a programming issue with one of his robots. A few minutes earlier, he’d been testing another robot on the sumo platform, controlling its movements by using an app on a cell phone.

“I can’t really explain it,” he said of his interest. “I’ve just gravitated toward robotics all my life.”

Classmate Anthony Willbur is also 13, is also from Battle Creek and also has a similar longtime interest in robotics. He said he developed an interest in the field when he received a Lego Batman kit that included simple working turbines when he was just 8 years old. He later got a dedicated robotics kit and used it to make more than 60 different tanks.

A self-taught engineer, Willbur brought a sumobot to class that he built at home.

“I look at a picture and it’s like, hmm, maybe I could build that,” Willbur said. “I just try to make it as close as possible.”

Robb Cohoon, the class instructor and a science teacher who’s been teaching Lego robotics in the area for more than a decade, said not all the kids taking the class had experience in robotics, and that they started the course covering the basics. The purpose of the course is to introduce students to the kits and sensors and to hopefully help the kids to generate an interest in the field.

Cohoon said a major benefit of studying robotics for students is that they’re learning to use a lot of skills related to STEM – Science, Technology, Engineering and Math.

“Anything I’ve ever taught with science, this is the only thing that I’ve ever done that hits every aspect of STEM,” Cohoon said. “We’re basically training and educating the engineers of the future.”

One of those possible engineers of the future is 12-year-old class participant Gabe Keese, of Colon, who said he built a remote-controlled walking robot with legs three or four years ago and that he took the class because it sounded interesting.

He hasn’t been disappointed.

“At first I thought, hmm, Legos are really fun,” Keese said. “But then I took this and it was like, whoa, I didn’t know you could do all this. It’s one of those things that completely blows your mind.”