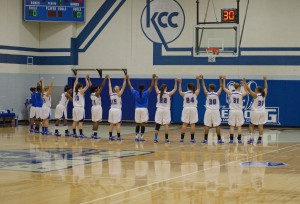 The Bruins prepare to play Olivet on Saturday.

The Kellogg Community College women’s basketball team grabbed their third win in a row with a 79-47 victory over Olivet College’s JV squad at home on Saturday, which brings their record to 3-2 for the season so far.

The game marked the Bruins’ first official home game of the season and their second win against Olivet’s JV in as many weeks, as they won a previous contest against the team 57-34 in Olivet late last month.

Here are some stats from Saturday’s game:

The women’s basketball team plays next as part of the Delta College tournament scheduled for Friday and Saturday, Dec. 7 and 8, in University Center. Their next home game is scheduled for 1 p.m. Saturday, Dec. 29, against Owens Community College in the Miller Gym on KCC’s North Avenue campus. Click here for a complete 2012-13 women’s basketball schedule.

To view more than 20 photos from the team’s game against Olivet on Saturday, visit KCC’s Facebook page at www.facebook.com/KelloggCommunityCollege/photos_albums.