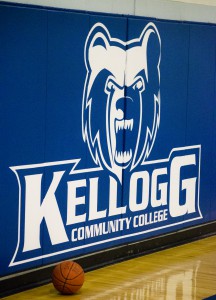 The men’s team is 3-7 and the women are 4-3 after this weekend’s contests.

The Kellogg Community College men’s and women’s basketball teams faced tough tournament opposition during the Lynn Conway Holiday Classic in University Center this past weekend, with the men coming home 0-2 and the women coming home 1-1 for the weekend. Below are stats from each game.

The weekend’s contests bring the women’s team’s record to 4-3 for the season so far, though they have yet to play a conference opponent. The team plays next against St. Clair Community College at 1 p.m. Saturday, Dec. 15, in Port Huron.

The losses bring the men’s team’s record to 3-7 for the season so far, though they have yet to face a conference opponent. The team plays next as part of a tournament scheduled for Friday and Saturday, Dec. 14 and 15, at Kalamazoo Valley Community College in Kalamazoo.