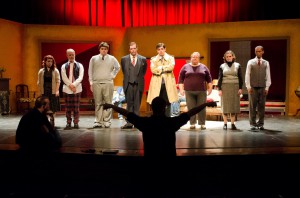 KCC theater students stand during a dress rehearsal for their fall production of “The Mousetrap” in October.

For more information about KCC’s production of “The 25th Annual Putnam County Spelling Bee,” including descriptions of each role, visit www.kellogg.edu/performart/theatre/productions.html, or contact Director Brad Poer at poerb@kellogg.edu.