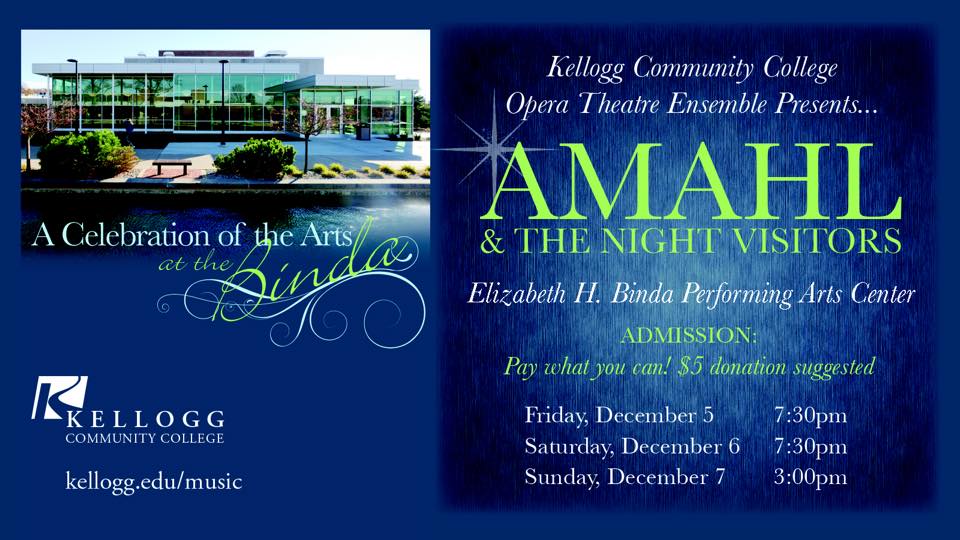 The christening of Kellogg Community College’s, newly renovated Binda Performing Arts Center continues next month with a presentation of the holiday opera “Amahl and the Night Visitors.”

“Amahl” will be presented by KCC’s Opera Theatre Ensemble at 7:30 p.m. Friday and Saturdy, Dec. 5 and 6, and 3 p.m. Sunday, Dec. 7, at the center, located on campus at 450 North Ave., Battle Creek. There will be a “Meet the Artist” dessert reception immediately following the Sunday matinee performance, catered by Barista Blues Café.

All showings are “pay what you can,” though a $5 donation to support KCC choirs is suggested.

The opera, originally commissioned for television by NBC in 1951 and composed by Gian Carlo Menotti, follows the experiences of a young boy who comes into contact with the biblical three kings on their way to visit the Christ child in the traditional story of the first Christmas.

The KCC production will feature a chorus of members of the College’s residential choirs including the Branch County Community Chorus, the Kellogg Singers and other KCC students and community members from the Battle Creek area. Also featured will be a 14-piece orchestra consisting predominantly of professional musicians from Battle Creek, Kalamazoo and Lansing area symphonies in addition to student, faculty and guest instrumentalists led by Maestro Brooks Grantier.

The orchestra is funded by an anonymous donor in honor of the newly renovated theatre space and the donor’s passion for opera.

Dr. Gerald Blanchard, music coordinator at KCC and artistic director of the program, said the production is a wonderful Christmas opera appropriate for the entire family.

“This is an opera for everyone, and an awesome way to kick off the holiday season as well as the musical season at the Binda Theatre,” Blanchard said. “This opera is told from the perspective of a child, the young Amahl, and it is filled with elements of wonder, imagination and excitement – the very things that make Christmas such a special time.”

The opera will begin with a special presentation of the act-one finale of Gioachino Rossini’s “The Italian Girl in Algiers,” which will be accompanied solely by the College’s newly acquired seven-foot Baldwin concert grand piano as a way to highlight the addition of the instrument to KCC’s Music Program.

Blanchard said the Baldwin is well worth experiencing in live performance.

“The quality of tone is rich and vibrant with more clarity and focus than many other great American pianos; it has a robust sound and fluid, quiet action,” Blanchard said. “This is a spectacular concert instrument from a stellar period of production for Baldwin, when many of the world’s greatest pianists chose Baldwin as their instrument of choice.”

The presentation of “Amahl” is second in a series of “rededication” events for the Binda Performing Arts Center since the completion of a $4.1 million renovation project at the theatre in October. The first of the series was the College’s fall play – “Sampled Shakespeare” – which opened Nov. 14 and shows on select dates through Nov. 23. Additional rededication events include a Holiday Jazz Explosion presentation by the KCC Jazz Band on Dec. 9 and several musical presentations – including the spring musical “The Pirates of Penzance” – next semester.