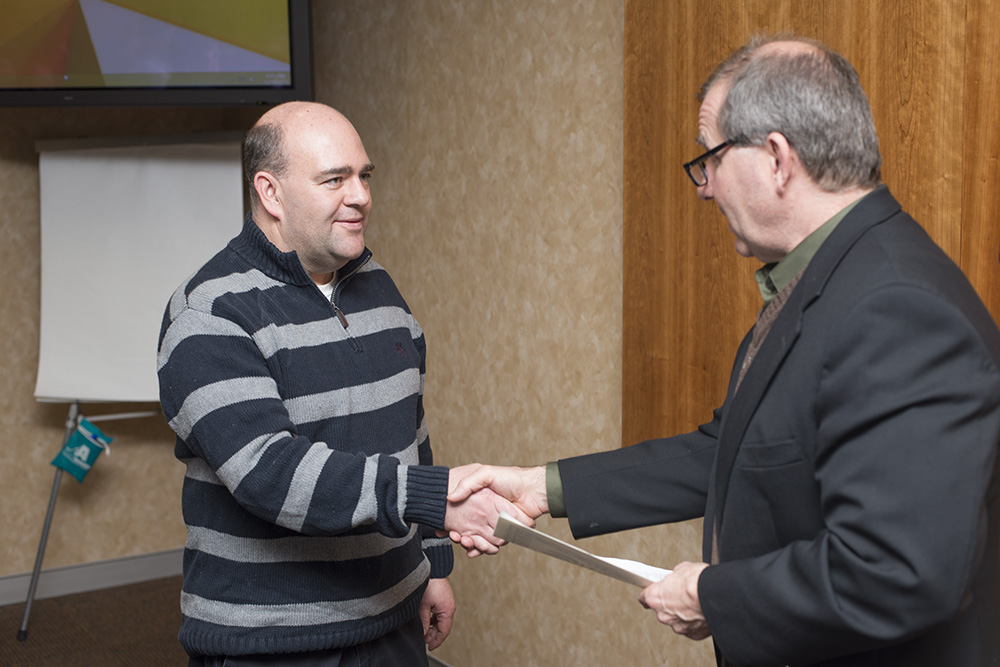 Patrick O’Donnell was officially sworn in Wednesday, Jan. 21, as the newest member of the Kellogg Community College Board of Trustees.

O’Donnell was elected to the Board in the November general election and will serve a six-year term ending Dec. 31, 2020. He replaces former Trustee Brian Hice on the seven-member governing body. Also sworn in Wednesday was incumbent Jonathan Byrd, who was re-elected in November to a six-year term. Trustee Reba Harrington, who also was re-elected but was absent from Wednesday’s meeting, is expected to be sworn in at a later date.

“I’m honored that the voters chose me to be on the Board. It’s great to come back to a school that treated me so well as a student and which continues to be such a great institution,” O’Donnell said. “I will strive to ensure that KCC remains a vital asset to the community in the years to come.”

O’Donnell graduated from Lakeview High School in 1990, then earned an Associate in Applied Science degree from KCC in 1993 and a Bachelor of Science degree in electronics from Siena Heights University in 1994. O’Donnell is a board member of the Pennfield Lacrosse Club, an assistant scout master with Boy Scout Troop 374 and is a member of the Battle Creek Metropolitan Area Moustache Society. He attends Grace Community Church and lives in Battle Creek with his wife, Belinda, son, Jacob, and daughter, Emma.

Dr. Dennis Bona, president of KCC, welcomed O’Donnell to the Board of Trustees and to the KCC family.

“I’m proud that Mr. O’Donnell, a KCC alumnus and walking testimonial for Bruin pride, is returning to his alma mater in the capacities of service and leadership,” Bona said. “I look forward to working with him and all trustees on the plethora of opportunities that awaits us.”

KCC trustees are elected by voters in the KCC tax district, which includes most of Calhoun County and small portions of Barry, Branch, Hillsdale, Kalamazoo and St. Joseph counties. The College’s service district covers Barry, Branch and Calhoun counties.

As a policymaking body, the Board makes decisions that keep KCC financially stable, creates partnerships in the communities served by the College and enables learning experiences to help students become employable and successful. The Board works directly with Dr. Bona.

The Board meets on the third Wednesday of every month at 6:30 p.m. inside Room 301A, Roll Health and Administration Building, 450 North Ave., Battle Creek. Meetings are open to the public. For more information, including minutes of past meetings, visit www.kellogg.edu/board-of-trustees.