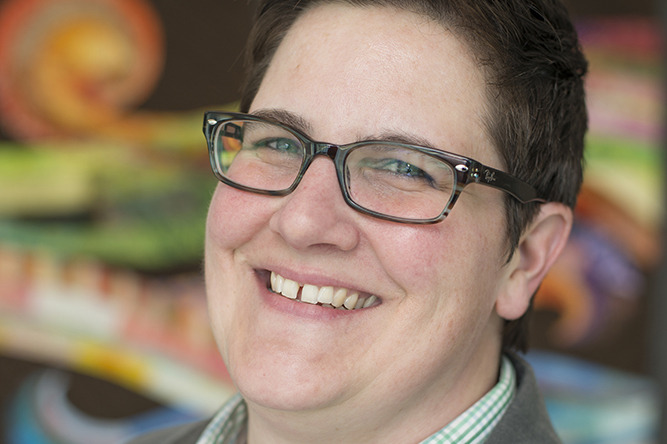 The award, one of just 23 given nationwide to college vice presidents, deans or leaders other than college presidents/CEOs serving in an administrative capacity, goes to those “who have demonstrated a strong level of support for Phi Theta Kappa during their tenure,” according to PTK. The award was presented during the organization’s annual convention in San Antonio April 17.

Recipients of the award must have served in their position for at least five years as of Dec. 4, 2014, and be nominated by their College’s PTK chapter. Zaremba was nominated for the award by a team of PTK officers from the College’s Alpha Nu Eta chapter, for which Zaremba served as lead advisor from 2003 to 2010.

Angie Bess, an admissions representative at KCC and the PTK chapter’s current advisor, said the nominating team was inspired by a quote from Zaremba herself: “As educators, we often talk about how we impact students; occasionally, we talk about how students impact us.”

“We used this quote as our framework for nominating Terah for the award,” Bess said. “Using examples of Terah’s commitment to student success, excellence and inspiration in her daily conversations with students, colleagues and peers.”

Zaremba was born in California and spent her formative years in East Lansing, where her father took classes as an adult learner at Michigan State University. Her family lived in family housing at MSU; Zaremba literally grew up on a college campus. She currently lives in Kalamazoo.

Zaremba earned a Bachelor of Science degree in Sociology and Master of Education degree in College Student Affairs Leadership, both from Grand Valley State University. As an undergraduate and graduate student, she was heavily involved in Student Life activities and initiatives on campus and worked for the college as a transfer advisor, academic advisor and admissions representative before performing similar roles at KCC beginning in 2003.

Zaremba worked at KCC as an admissions representative until June 2007, when she became manager of Student Life at the College, then worked as director of Academic Advising and Student Life from July 2010 to June 2013 before moving into her current position as dean of Student Services in July 2013.

Dr. Kay Keck, vice president of Student and Community Services at KCC, called Zaremba’s work with the PTK Program at the College phenomenal.

“As the PTK advisor, Terah worked with the students to achieve the coveted PTK Five-Star status for the chapter; a status which measures the chapter’s level of engagement and one which KCC has retained under her overall leadership,” Keck said.

KCC’s Alpha Nu Eta chapter of PTK currently includes 369 members, including 79 inducted during the Spring 2015 semester. Members are involved in several on- and off-campus volunteer activities and initiatives each semester, including the Service-Learning area’s Bruins Give Back initiative and cleanups on the Kalamazoo River.

Phi Theta Kappa Honor Society, headquartered in Jackson, Miss., is the largest honor society in higher education, with 1,285 chapters on college campuses in all 50 of the United States, plus Canada, Germany, the Republic of Palau, Peru, the Republic of the Marshall Islands, the Federated States of Micronesia, the British Virgin Islands, the United Arab Emirates and U.S. territorial possessions. More than 3 million students have been inducted since its founding in 1918, with approximately 134,000 students inducted annually.