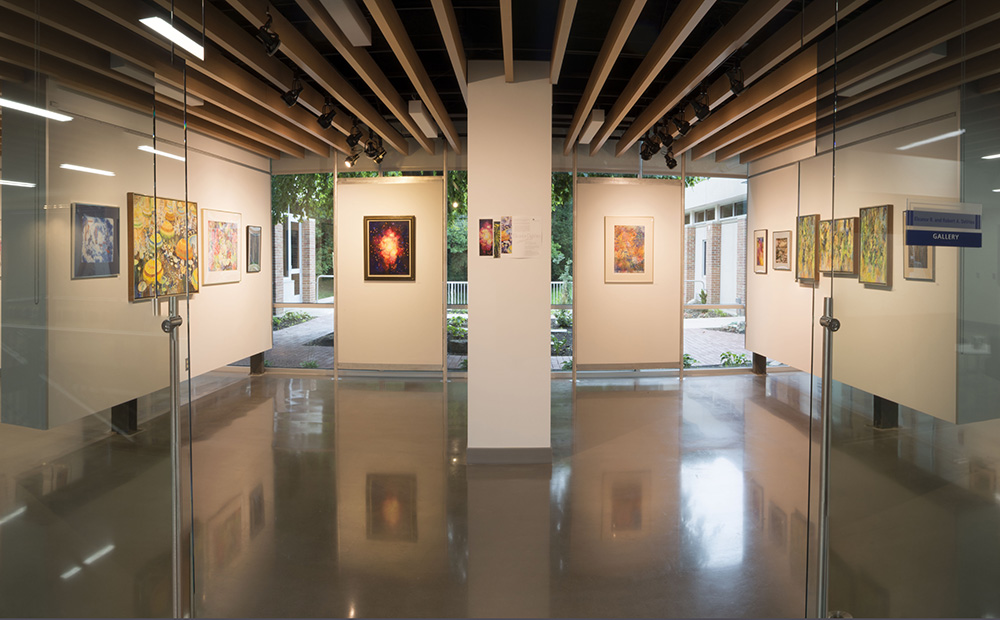 Kellogg Community College is breaking in the College’s new art gallery this fall with an exhibit of artwork created by the one of the gallery’s namesakes, Eleanor DeVries.

DeVries’ “A Brush with Life” exhibit, which includes more than three dozen works across mediums including acrylic, photography, watercolor/mixed media and handmade paper, will be on display through Oct. 30 in the Eleanor R. and Robert A. DeVries Gallery in KCC’s newly renovated Davidson Visual and Performing Arts Center, on campus at 450 North Ave., Battle Creek.

The latter event will celebrate the completion of renovations at the center, which began last December and were completed late this summer. The renovations included a relocation of the gallery and an expansion that added additional exhibit space.

Works featured in the current exhibit include a unique mix of some of DeVries’ more abstract pieces selected by KCC art professors Ryan Flathau and Pete Williams. Many of the works focus on the natural world and some are being shown for the first time in Battle Creek.

In her artist’s statement covering works in the exhibit, DeVries said over the years nature has been a favorite subject matter to cover in her art.

“The goal is to show the wonder, beauty and orderliness of God’s creation,” DeVries said. “Nature and the changing seasons, for me, symbolize the changes in life. Interdependency, growth, respect and an ongoing creation are themes in my work.”

A lifelong educator, DeVries graduated from Valparaiso University in 1957 with a bachelor’s degree in education, returning to school years later and graduating from KCC’s art program in the 1980s and earning two master’s degrees from Western Michigan University, in 1987 and 1988, respectively.

DeVries’ work has been accepted in more than 150 juried regional, statewide and national competitions since 1987 and has been featured in approximately 16 one-person exhibits. In 2003, DeVries was one of 100 alumni honored as the “Art Alumni 100” during the university’s 100th anniversary celebrations.

DeVries and her husband Robert have been the recipient of several art honors and awards over the past several years, and in 2010 KCC named the Davidson Center art gallery in their honor; the gallery was created in the early 1990s through a generous donation from the couple. Other honors include the Leila Arboretum Society’s Golden Seedling Award (2011), the Art Center of Battle Creek naming its education programs the Eleanor and Robert DeVries Education Programs in their honor (2012), and a Distinguished Philanthropist Award from the Association of Fundraising Professionals West Michigan Chapter (2014).

The above photo of the new Eleanor R. and Robert A. DeVries Gallery in KCC’s newly renovated Davidson Visual and Performing Arts Center is courtesy of Ryan Flathau.