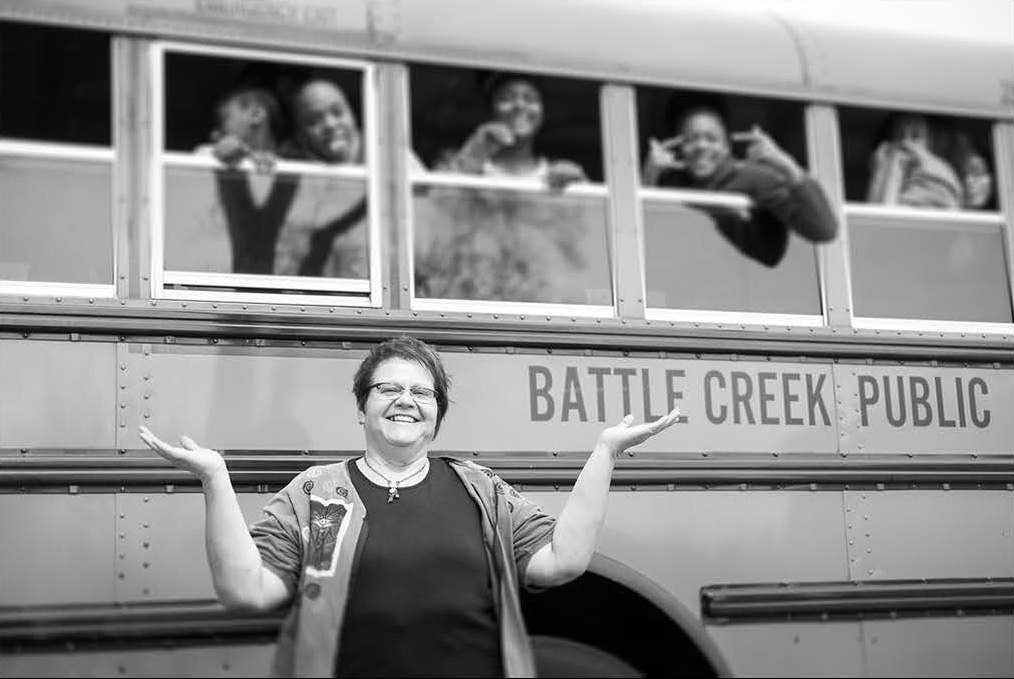 An upcoming photography exhibit at the Art Center of Battle Creek will showcase collaborative portraits taken by Kellogg Community College faculty members and students of more than a dozen local residents who have made a positive impact on their communities.

The exhibit, titled “Battle Creek: Where Nobody Need Wait,” will be on display May 5 through 28 at the center, located at 265 E. Emmett St., Battle Creek; an opening reception with the artists will be held at the center from 5 to 7 p.m. May 5. Both the exhibit and reception are free and open to the public.

KCC Photography and Multimedia Program professor and program coordinator Ryan Flathau, who along with adjunct photography instructor Tom Brayne and four KCC photography students, shot the local portraits, said the exhibit was pitched to him by Lakeview High School teacher Scott Durham as a complement to a communitywide Holocaust Remembrance Project running through the month of May.

The exhibit is meant to highlight individuals “who have stepped up to make our lives more meaningful and purposeful,” Flathau said.

Durham, who helped spearhead the Holocaust Remembrance Project, said the exhibit stemmed from a desire to “connect the history to today.” Subjects for the portraits were nominated by community members, and the criteria was simple: Find people who help others who do not get credit.

“We are highlighting people who help only for the reason that people need help,” Durham said. “Some have been doing it for years others are just beginning.”

Durham said the project is meant to both inspire and educate, and that the breadth and depth of the 17 subjects featured in the portraits in the exhibit is impressive.

“There are people interested in history, storytelling, youth sports, social justice, policing, hunger, poverty, religion,” he said. “What they all have in common is they are trying to make life better both for individuals in our community and for the entire community as a whole.”

Flathau said the students were chosen “based on their proven technical abilities, evidence of collaboration with their peers, career goals and eagerness to participate,” and that giving students such real-world experience is particularly important in occupational programs like photography.

“This project did that, as well as solidified the importance of community and their collaboration within that community,” Flathau said.

The KCC exhibit will complement the Art Center’s concurrent photography exhibit, “Besa: A Code of Honor,” which features images by Norman Gershman of Muslim Albanians who rescued Jews during the Holocaust. The displays are among several community events to be held during the month as part of the communitywide Holocaust Remembrance Project, which also includes a screening of the documentary, “Besa: The Promise,” at Lakeview High School; a presentation and art exhibit by Holocaust survivor Miriam Brysk at the Federal Center; several theatrical performances of “The Diary of Anne Frank” at What A Do Theatre; and a gallery talk from Dr. Marlene W. Yahalom, director of education for the American Society for Yad Vashem at the Art Center.

“While many individuals and organizations are doing separate things, it seems to be all done in the same spirit,” Durham said. “And it is only in this type of collaboration that true community is created.”

Individuals featured in the KCC exhibit include:

The KCC exhibit and is made possible due to funding from a DeVries Partnership in the Arts grant from the Battle Creek Community Foundation, as well as support from the Ravitz Family Foundation. For more information about the exhibit, contact KCC Photography and Multimedia Program Coordinator Ryan Flathau at 269-565-7880 or flathaur@kellogg.edu.

Pictured above is a portrait of Jan Cramer, photographed for the exhibit by KCC instructor Tom Brayne.