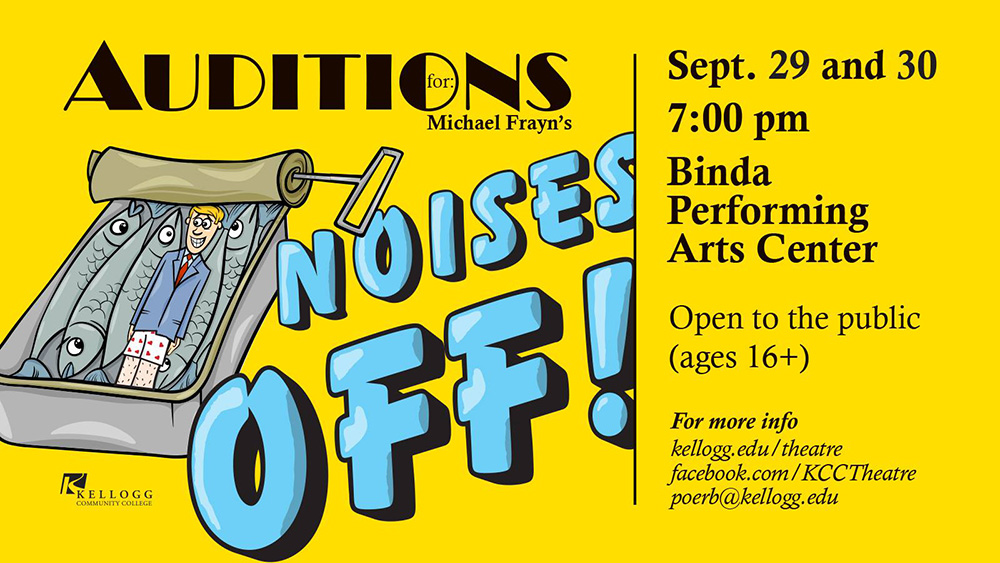 Auditions for “Noises Off!” are open to the public as well as to students and will be held from 7 to 9:30 p.m. Thursday and Friday, Sept. 29 and 30, at the Binda Performing Arts Center, on campus at 450 North Ave., Battle Creek. The show will run for six performances in November.

“Noises Off!” is a play about what it’s like to be in a play where everything goes wrong. It’s the story of a company of lower-level professional actors and technicians producing a play called “Nothing On.” Act I covers the final dress rehearsal for opening night of the show and things are nowhere near ready. Before Act II, the entire set for the show rotates 180 degrees, and the audience will see the company performing the show from backstage. In Act III, the set rotates to show the “front” again and the audience will see the show as it completely falls apart in what KCC Theatre professor and “Noises Off!” director Brad Poer calls “glorious, tragic-comedic chaos.”

Actors interested in auditioning for “Noises Off!” may choose to audition on either date. Those auditioning should wear comfortable casual clothes and arrive a little before 7 p.m. to fill out an audition form and get a picture taken. Auditions will run until 9:30 p.m.

Most of the audition process will consist of cold-reading select scenes from the script with others who are auditioning. Everyone will be considered for all roles unless the actor specifies in his or her audition form that he or she only wants consideration for certain parts.

Student actors majoring in theatre or performance or those with a great deal of experience who want the audition practice may also prepare a 30-second to one-minute contemporary comedic monologue from a play other than “Noises Off!” to perform as time allows.

Actors auditioning for roles in “Noises Off!” should note that it’s a show requiring all of the actors to be in decent physical shape as there is a lot of movement, including stage combat, pratfalls and other “slightly risky physical behavior,” Poer said. Additionally, as the characters in “Nothing On” are written to be British, British dialects of varying types will be encouraged for all characters, but are not required.

“Noises Off!” rehearsals will begin at 7:30 p.m. Tuesday, Oct. 3. All standard, non-tech rehearsals will run from 7 to 9:30 p.m. Mondays through Fridays after this date. As this is a small cast show and nearly everyone will be called for all rehearsals, those who do not have at least four nights per week to rehearse will not be considered for roles (though consideration for technical/backstage roles may still be possible).

Actors cast will also need to be free for two weekend technical rehearsals during the late morning to late afternoon on Saturday and Sunday, Nov. 5 and 6.

Selected actors will be notified and the final cast list posted no later than noon Tuesday, Oct. 3.