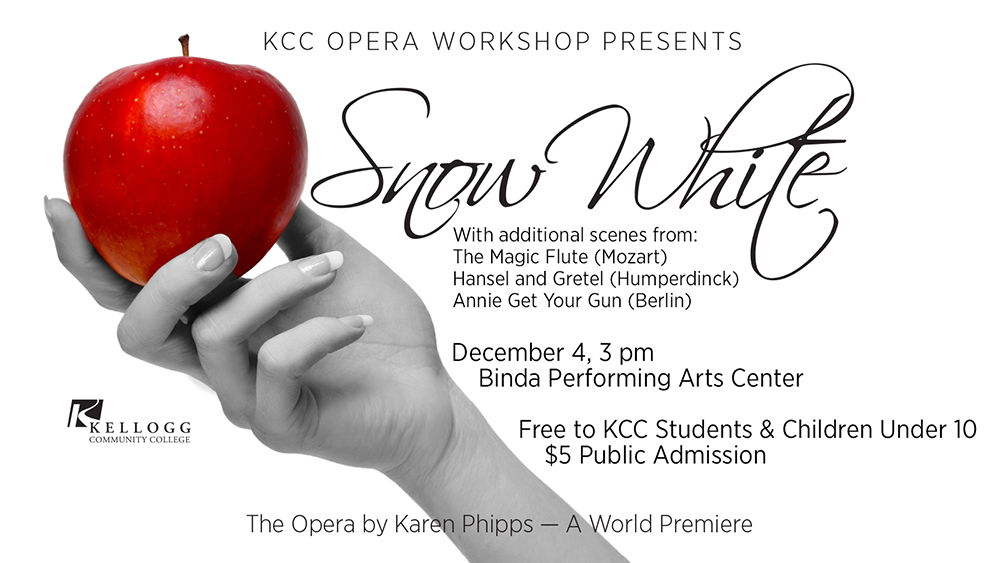 “Snow White” is a one-act opera based on the popular fairy tale first published by the Brothers Grimm. The production will begin at 3 p.m. Sunday, Dec. 4, at the Binda Performing Arts Center, on KCC’s campus at 450 North Ave., Battle Creek.

General admission tickets are $5 per person and may be purchased at the door the day of the event. The opera is free to attend for KCC students and for youths age 10 and under.

The opera’s Artistic Director Dr. Gerald Blanchard, who also is director of vocal music and Music Area coordinator at KCC, said the opera “is both beautiful and challenging.”

“Musically there are moments of soaring vocal lines accompanied by aggressive rhythmic elements,” Blanchard said. “The composer represented musically moments of bright light and beauty and moments of dark mystery. This work is a lovely retelling of the Grimms’ tale.”

Composer Phipps, who lives in the Ann Arbor area and is an organist and choir director at St. Paul’s Evangelical Lutheran Church in Livonia, studied composition and organ at Eastern Michigan University. Phipps said she wrote the opera in 2010 with the college-level student in mind and as a performance medium that would lend itself to touring area schools and meetings of local community groups. Her goal, she said, is to bring the magic of opera to those who may not have had the opportunity to experience it firsthand.

Currently the opera, which has never been formally presented in full for a public audience, is accompanied by piano only (Cynthia Fillmore-Garn will serve as staff accompanist for the KCC performance), but Phipps is working on a version that will utilize a chamber orchestra.

In addition to the full presentation of “Snow White,” the Opera Workshop cast also will present three independent scenes from opera and musical theatre repertoire, including:

“This Opera Workshop presentation will have something for all tastes and will be filled with many surprises,” Blanchard said.

For more information about “Snow White: The Opera,” KCC’s Opera/Musical Theatre Workshop or other music and performance offerings at KCC, visit www.kellogg.edu/music or contact Dr. Gerald Blanchard at blanchardg@kellogg.edu.