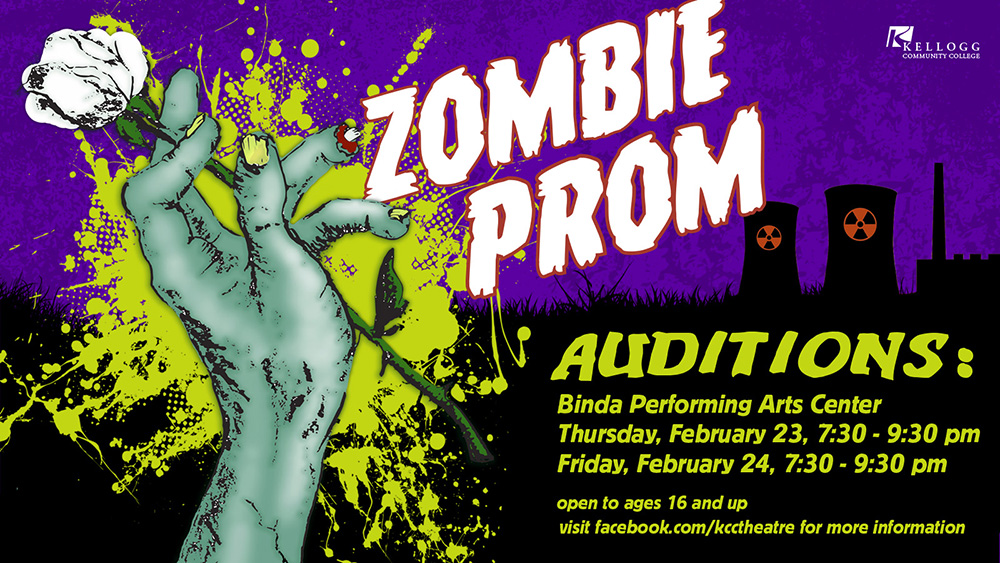 Kellogg Community College is hoping to cast up to 30 actors for the College’s spring musical “Zombie Prom” during open auditions this month in Battle Creek.

Auditions for “Zombie Prom” are open to the public as well as to students and will be held from 7:30 to 9:30 p.m. Thursday and Friday, Feb. 23 and 24, at the Binda Performing Arts Center on campus at 450 North Ave.

KCC Theatre professor and “Zombie Prom” director Brad Poer said the musical is “a 1950s horror comic book brought to life as a musical comedy film” and “a campy, rollicking romp through America’s Atomic Age and the Golden Age of horror comic books.”

“Zombie Prom” roles are open to all actors ages 16 and up. Actors interested in auditioning for the musical may choose to audition on either date and should wear clothes and shoes comfortable enough to move and dance in.

Each audition will consist of three main activities:

There is no guarantee every actor will get to read for every part, but all will be considered for every part based on what they show in their auditions.

For individuals interested in being involved in the production but with a more limited schedule, there are also spaces available in a backstage capacity with a less extensive scheduling requirement.