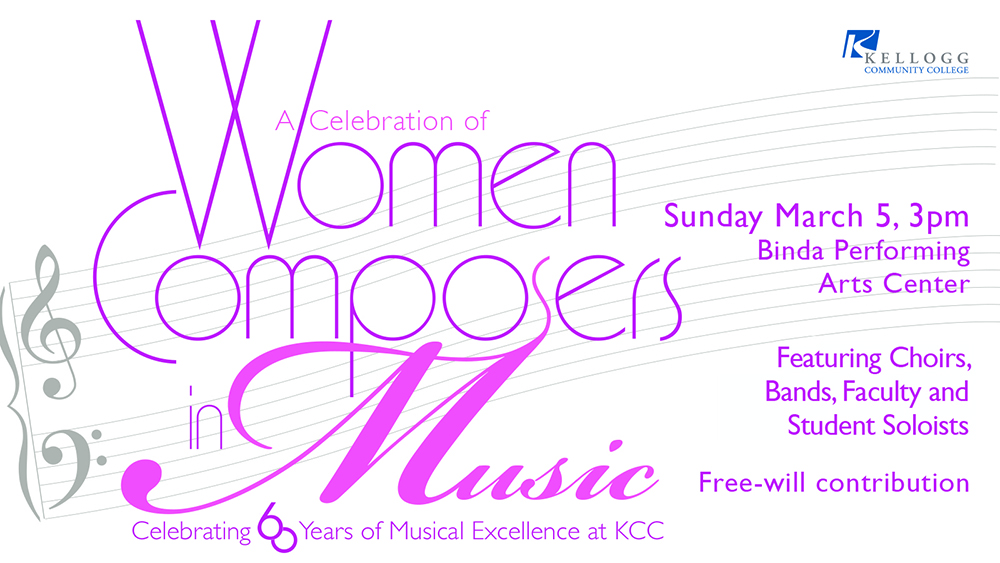 Kellogg Community College will kick off National Women’s History Month next month with an elaborate celebratory concert honoring the musical legacies and contributions of women composers.

The concert event, titled “A Celebration of Women Composers in Music,” will begin at 3 p.m. Sunday, March 5, at the Binda Performing Arts Center on KCC’s campus at 450 North Ave., Battle Creek. Admission is free, but a freewill donation to support KCC music initiatives and students scholarships will be collected.

Dr. Gerald Blanchard, director of choral activities and music area coordinator at KCC, said that social attitudes prior to the 20th century prohibited most women from having the opportunity to obtain a formal music education, and it wasn’t until later in the 20th century that many works by women composers rose to prominence.

“It is a sad fact that women composers are still far less represented than their male counterparts in the number of musical publications available to musicians and the general public,” Blanchard said. “This concert will highlight the contributions of many of these oftentimes lesser known composers whose works are no less substantial but who have had a harder time having their musical voices heard on stage.”

Blanchard said the concert is by far the largest concert event the department has presented in years, with featured performers including:

In addition to celebrating the music and legacies of women composers, the event is one of several hosted on campus this semester celebrating the 60th anniversary of the College and its vocal/choral music area, which were founded in 1956.

A celebratory reception with refreshments sponsored by the Kellogg Community College Foundation will immediately follow the concert in the Binda Lobby, where displays sponsored by the American Association of University Women and KCC’s 60th Anniversary Committee will also be located.