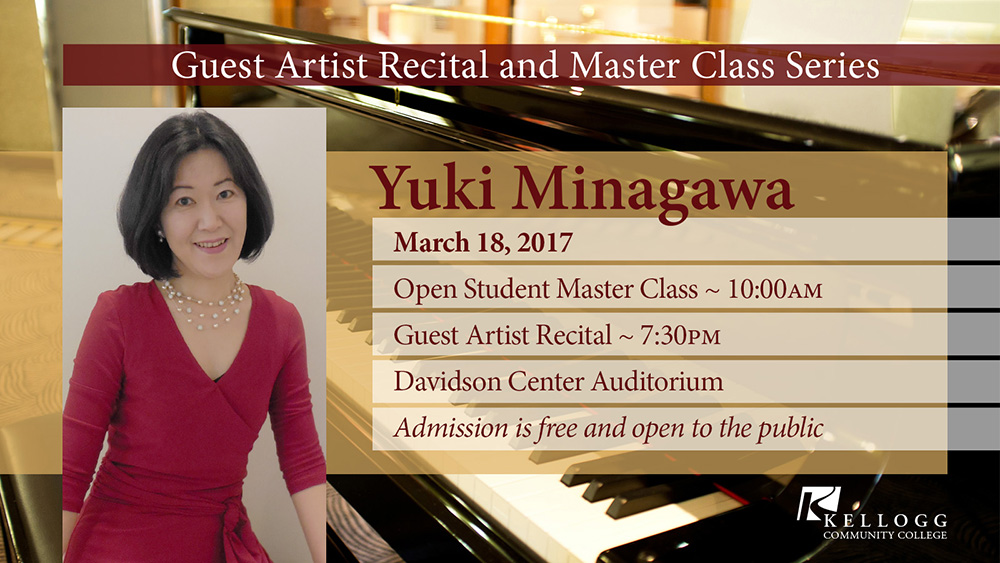 Kellogg Community College will host award-winning Japanese pianist Yuki Minagawa for a pair of musical events open to the public on March 18.

Minagawa, who currently resides in Battle Creek, will present an Open Student Master Class beginning at 10 a.m. and a Guest Artist Recital performance beginning at 7:30 p.m. Saturday, March 18. Both events are free and open to the public and will be held in the auditorium of KCC’s Davidson Visual and Performing Arts Center, 450 North Ave., Battle Creek.

“Although the focus is on the student, it’s a wonderful opportunity for those in the community who have an interest in piano to see the learning and teaching process up close and personal,” Blanchard said.

For the Guest Artist Recital, Minagawa will perform works by composers including Albeniz, Bach, Debussy, Mozart and Schumann.

Born in Tokyo, Minagawa started playing the piano at just 4 years old. Since that time she has won several award for her work, including an excellence award in the Senior Group of the Piano Teachers’ National Association of Japan in 1993; and Grand Prize Virtuoso awards in 2015 and 2016.

She has participated since 2011 in the International Keyboard Institute & Festival held in New York City and has performed internationally, including in Battle Creek, where she is an accompanist and voice coach of the Japanese women’s chorus Hidden Treasures and is a member of the Morning Musical Club. Since 2012, Minagawa has continued to develop her skills under piano professor Lori Sims of Western Michigan University’s School of Music.