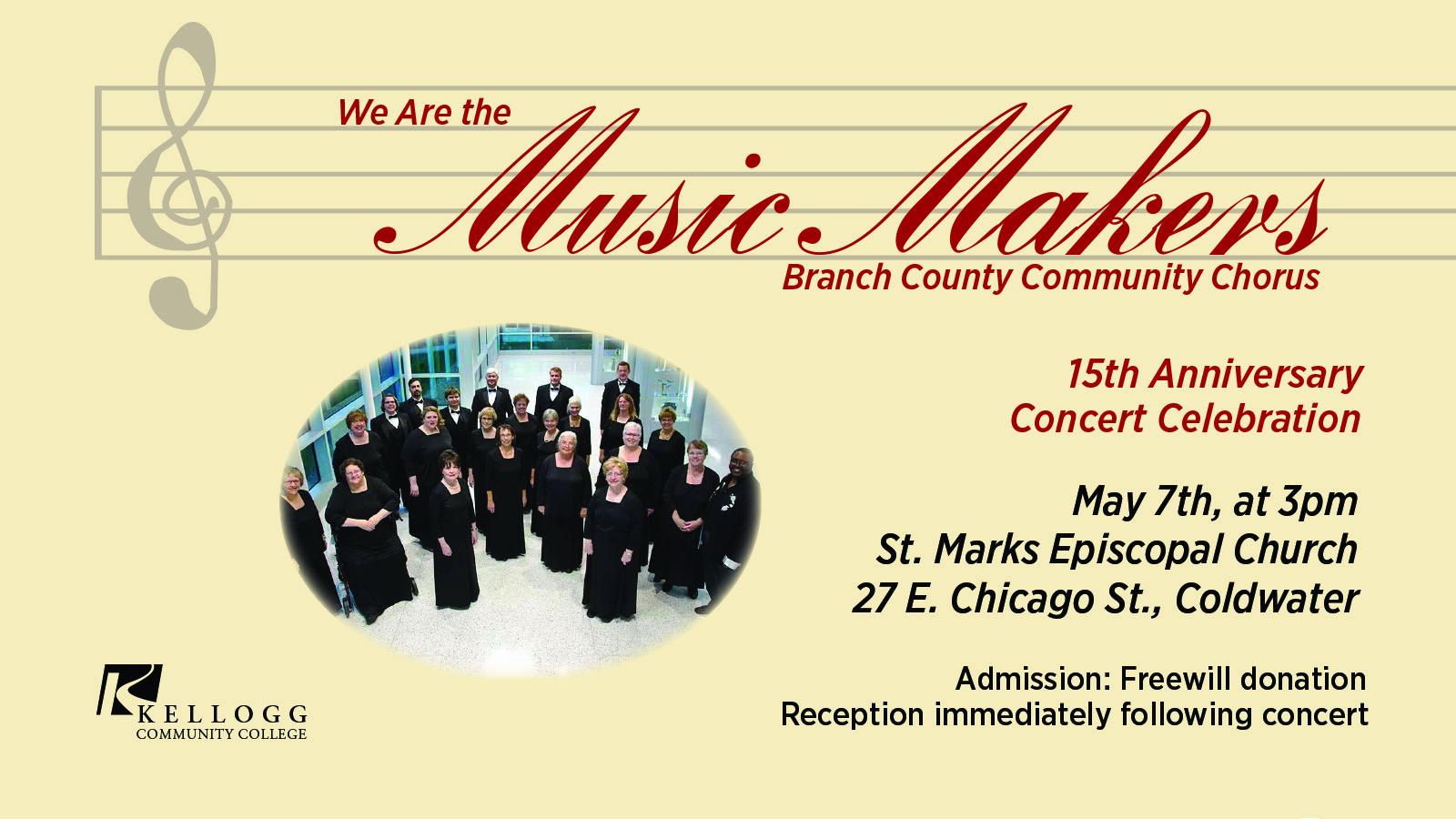 “We Are the Music Makers: A 15th Anniversary Choral Celebration” will begin at 3 p.m. Sunday, May 7, at St. Mark’s Episcopal Church, 27 E. Chicago St., Coldwater. The event is free and open to the public; light refreshments will be served at the concert’s conclusion.

The BCCC, established in the fall of the 2001-02 academic year, is a “town and gown” KCC ensemble that produces high-level concert performances. Membership is open to anyone who wishes to sing with the group.

Dr. Gerald Blanchard, director of choral activities and music area coordinator at KCC and director of the BCCC since 2004, said, “The Chorus membership finds commonality in the dedication to learning and performing history’s best choral offerings. The BCCC has something for all who love the choral arts. We are a community of folks who simply love to sing. Come join in on the fun!”

Compositions featured in the May 7 concert program include:

The event will also include a freewill offering to raise funds for KCC music programming and initiatives, including the KCC Choral Union’s Spring 2018 concert tour of Michigan and Minnesota.

The BCCC, established in the fall of the 2001-02 academic year, is a “town and gown” KCC ensemble that produces high-level concert performances. Membership is open to anyone who wishes to sing with the group. Under the leadership of Dr. Gerald Blanchard, who became BCCC director in 2004, the BCCC greatly expanded its repertoire to include not only the traditional classical repertoire (including works by Bach, Handel, Mozart and others), but jazz, show music, world music, spirituals, opera choruses and much more. During its 2006-07 concert season, the BCCC began its semi-annual choral touring program. The choir has since toured nationally and internationally, presenting concerts in the U.S. in Illinois, Indiana, Massachusetts, Michigan, New York and Ohio. In the summer of 2012, the BCCC embarked on its inaugural European concert tour, presenting concerts in Cork, Dublin and Malahide in Ireland. The choir returned to Europe in the summer of 2014, presenting concerts in towns and cities along the Amalfi Coast of Italy. In the summer of 2018, the choir will tour throughout the states of Michigan and Minnesota.