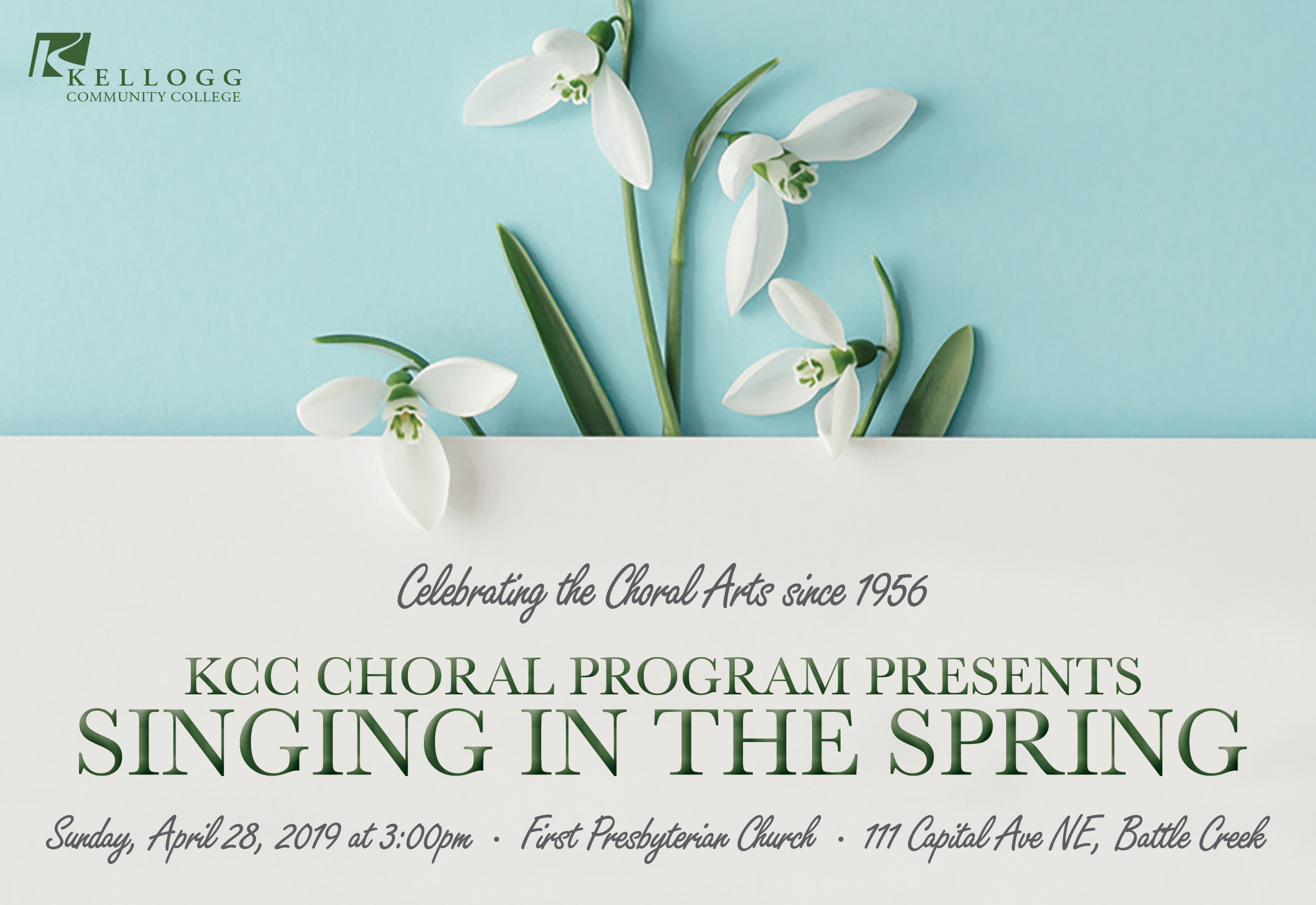 Students and faculty from across Kellogg Community College’s Choral Arts area will lead their audience on a musical journey this month during the College’s annual “Singing in the Spring” concert.

The concert program includes a selection of group and solo performances of classical and popular compositions, and will begin at 3 p.m. Sunday, April 28, at First Presbyterian Church, 111 Capital Ave. N.E., Battle Creek.

While admission is a freewill donation, the concert does serve as the official fundraising kickoff for the program’s 2020 Canadian Concert Tour. A cookie reception will immediately follow the performance.

Dr. Gerald Case-Blanchard, KCC Music Program coordinator and director of the College’s choirs and vocal arts area, said the concert offers something for everyone, and audiences will not leave disappointed.

“The range and variety of music is vast and packed with quality,” Case-Blanchard said. “There is something to suite all tastes.”

The concert will feature sacred and secular choral works, including:

The concert will also feature several masterwork compositions for mixed chorus, soloists and organ, including:

Case-Blanchard is available for comment and can be reached at 269-565-7859 or at blanchardg@kellogg.edu.

The College also host three residential choirs, including the Branch County Community Chorus, the Concentus Vocal Ensemble and the Kellogg Singers, which perform together as the KCC Choral Union. In addition to performing regularly in its home state of Michigan, the Choral Union has performed nationally at major venues in Illinois, Indiana, Minnesota, Massachusetts, New York, Ohio, Pennsylvania and Wisconsin, and performed international concert tours of Ireland and Italy in 2012 and 2014, respectively.

KCC choirs have opened for several internationally renowned musicians, including Grammy Award-winning musical groups Take 6 and Sweet Honey in the Rock, and regularly collaborate with major musical organizations including the Battle Creek Symphony Orchestra, the Haydn Festival Orchestra, the Monroe Community Chorale and Symphony and the Sacred Music Festival of Kalamazoo.