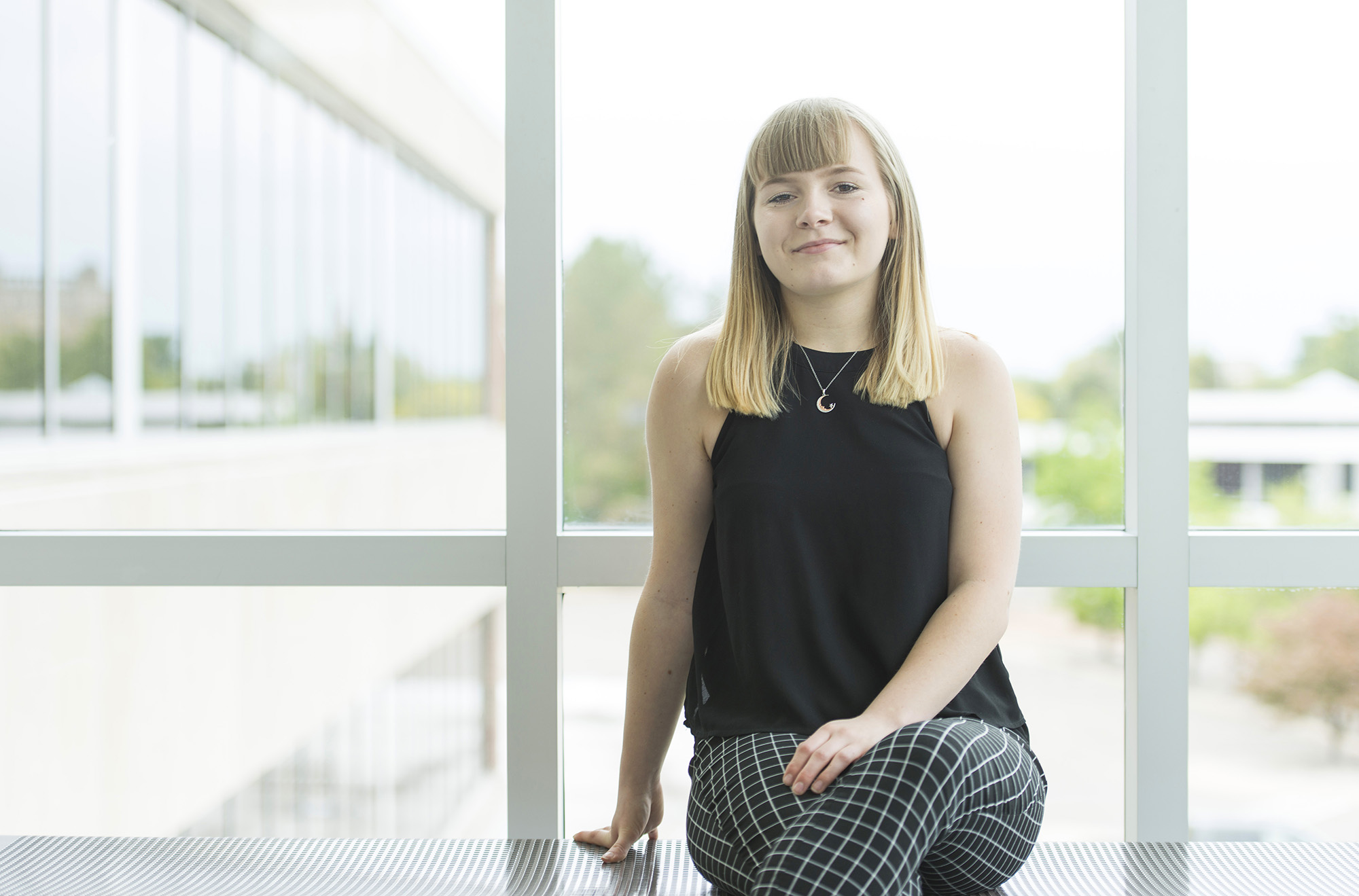 At first, Parker Towell wasn’t sure she wanted to attend Kellogg Community College. Like many of her peers, she was familiar with the stigma often associated with community colleges.

Community college is like a fifth year of high school, people would say. It’s where you go when you’re not “good enough” to get into a university.

But Towell didn’t listen. She starting dual enrolling at KCC through the College’s early college program during her junior year at Marshall High School and, after graduating from KCC in May with an Associate in Arts degree, she’s glad she did.

“It was kind of difficult for me to decide whether or not I wanted to dual enroll just because of what I’ve heard. But after I did it, I just realized that’s like the dumbest thing to think, because you’re saving money and you’re saving time,” Towell said. “I’m really glad that I did it.”

As far as not being “good enough” for a university, Parker was a straight-A student who scored a 1350 on her SATs, good enough to win the competitive President’s Scholarship at Saginaw Valley State University, where she’ll transfer this fall to study psychology. The scholarship covers tuition and selective mandatory fees for up to 124 credit hours, more than enough for Towell to complete her bachelor’s degree.

“With the early college, my associate has been paid for, and now with my scholarship my bachelor’s is paid for,” Towell said.

Eastern Calhoun Early College Coordinator Kathy Doud has known Towell for the past three years, since Towell first applied to the early college program in Marshall. She was Towell’s college counselor, a mentor and her main contact for all things early college.

Doud called Towell a strong leader who’s extremely articulate, to the point that Towell has been tapped to speak about the merits of the early college program in an official capacity a number of times, at school board meetings, to rotary and legislative officials, to student groups and others.

Towell has “the drive, the resilience and people skills to take her wherever her passion and opportunity lead,” Doud said. “She is mature, creative, brilliant, beautiful inside and out, and very caring.”

Doud said Towell and her early college classmates are eager learners “who understand the value of the educational opportunities and financial freedom” they received as as early college students, and have made the most of such opportunities.

Parker was able to take full advantage of such opportunities at KCC, volunteering with several organizations through the College and discovering her passion for psychology through KCC’s many psychology classes, from basic intro classes to classes in forensic psychology and neuropsychology.

“Education is really important to me,” Towell said, “and I was able to express that more here and actually put in the hard work.”

As she heads into her junior year at SVSU this fall, Towell isn’t sure exactly what she wants to do in the psychology field.

“I just want to help people and make them feel cared about,” she said.

She’s considering inpatient care at a mental hospital, or working in some kind of rehab, helping people go from the extreme of a condition to being able to function on their own.

But not knowing everything at the start is OK. Towell wasn’t necessarily sure what path she wanted to pursue when she started at KCC, but discovered it along the way. Her advice for high school students who might be in her position, considering attending a community college like KCC but wavering based on stigma or other insecurities?

KCC also helps students find their footing when, like her, they aren’t 100 percent sure what they want to do when they start college.

“It really reduces that risk of them dropping out, because you’re kind of like dipping your toes in the water, and then you’re like ankle deep, and then you’re hip deep and then you’re actually swimming and then it’s OK,” Towell said. “Instead of just being thrown in and being like oh, go ahead, have fun. I feel like I was really led through a lot of the experience, in a good way.”

For more information about early college at KCC, visit www.kellogg.edu/earlycollege or contact KCC’s  Dual Enrollment and Early College office at 269-565-2042 or dualenrollment@kellogg.edu.