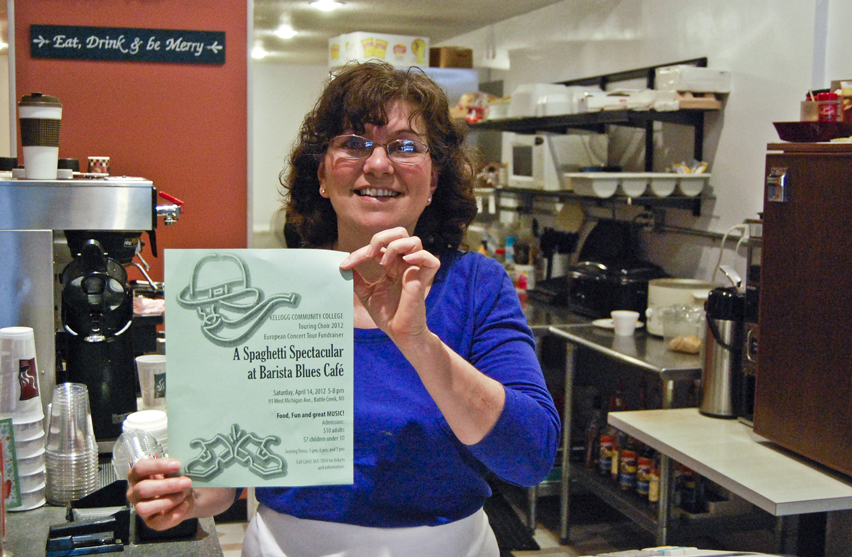 Italian food and Irish music may have little in common, but they’ll be working together for a common cause at Battle Creek’s Barista Blues Café this month when Kellogg Community College’s Choral Union hosts a concert there to raise funds for their upcoming tour of Ireland.

The café space – located at 91 W. Michigan Ave. – is being donated for the evening by owners Maryann and Michael Angelo for the Choral Union’s “A Spaghetti Spectacular at Barista Blues Café” event, scheduled for 5 to 8 p.m. Saturday, April 14, and featuring a spaghetti dinner along with a wide variety of live music.

“We’re doing a variety of stuff, everything from opera to jazz to Irish folk music,” said Gerald Blanchard, professor of vocal music at KCC. “There’s even gonna be some sing-a-long by the audience.”

The idea for the fundraiser came to Blanchard and Barista Blues owner Maryann Angelo as Blanchard was thinking up ways to raise money for the Choral Union’s Ireland tour, which is planned for July 4 through 10 and is the first international concert tour in the program’s history.

“I thought, how can I have our fundraiser also support one of our smaller local businesses?” Blanchard, a regular at the café, said. “And I just happened to mention to Maryann that I was interested in doing a fundraising event and perhaps we could do something with the restaurant. And then she said, well, what about a spaghetti dinner?”

A spaghetti dinner isn’t a stretch for Angelo, who keeps the café open late the first Wednesday of each month for an Italian dinner of lasagna and one other Italian dish, along with live entertainment from her husband, a professional musician. The couple also opens up the restaurant each winter for a holiday dinner for those less fortunate in November or December.

“We open the doors and there’s no charge for that, people just come in,” Angelo said. “Some of my regular customers come in as well just to sit and talk to some people who may not have had somebody who may not have anybody to have a conversation with.”

In addition to the space, Angelo will also be donating her time at the event, keeping only a small portion of the ticket sales – tickets are $10 for adults and $7 for children under 10 – to cover food costs. The meal will include pasta, a choice of meat or vegetarian sauce, bread, salad, drinks and a homemade dessert.

“I’ll make everything,” Angelo said. “Everything’s gonna be homemade, just like I was cooking it at home.”

The event falls the day before the Choral Union’s annual “Singing in the Spring” concert, which will also support the group through a free will offering but will include different programming. Tickets for the spaghetti dinner event can be purchased at the café or at the Arts and Communication department offices on KCC’s Battle Creek campus, located at 450 North Ave., or by calling KCC at 269-565-7859.

Blanchard said he’s already heard from attendees who will be coming from as far away as Sturgis and Union City, and even one who will be attending with a friend from Cincinnati.

“It is going to be a fabulous experience,” Blanchard said. “Great music, joy, excitement, excellent food and many surprises. Singing some old Irish tunes to some good old Italian pasta is gonna be wonderful.”