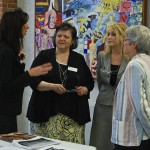 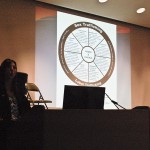 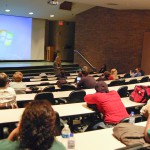 Speaker Carmen Kucinich, a victims specialist for the FBI who has worked with crime victims harmed by perpetrators of human trafficking, spoke first at the event, citing shocking statistics related to domestic and international sex and labor trafficking.

According to statistics from the University of Michigan Law School’s Human Trafficking Clinic, Kucinich said, 1.8 of every 1,000 persons is trafficked, yet only 0.4 percent of human trafficking victims are identified.

Adding weight to the statistics was the video about the issue Kucinich used to kick off her talk.

“The only way not to find this problem in a community is simply not to look for it,” one person said in the video.

“It’s right under our noses,” said another.

Kucinich drove that point home by offering select case studies from the field, including the stories of a 20-year-old victim from Lansing, a pregnant 14-year-old victim from an area near White Cloud and a victim from the Detroit area who was a single mother of four. One headline clipped from a news article about a sex trafficking operation stemmed from incidents right here in Battle Creek, Kucinich said.

Another speaker, Jackie Tuennesen, founder of the Theodore Carl Dream Center — which offers secular and faith-based programming in order to address the issues surrounding substance abuse, addictions, crime and prostitution — called human trafficking “one of the saddest subjects that ever talk about.”

In the photos above Kucinich, Natala Mohl, a KCC counselor and advisor to the Healthy Choices Leadership Organization, Tuennesen and speaker Sister Mary Ellen Gondeck, of the Sisters of St. Joseph in Kalamazoo, talk before the event; Kucinich speaks; and Tuennesen speaks.