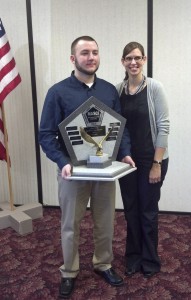 Ronald Uldriks and his wife Mary stand with the Glenn Bivins Award.

A Kellogg Community College student receiving apprenticeship training at the college’s Regional Manufacturing Technology Center is one of two individuals in the state to be awarded the Glenn Bivins Excellence in Apprenticeship Award from the Michigan Apprenticeship Steering Committee.

Ronald Uldriks, a Navy veteran employed as a mechanic in the Power Plant Apprenticeship Program at Western Michigan University’s Robert M. Beam Power Plant, was awarded the honor during a ceremony held at the GASC Technology Center in Flint in December.

Also known as the Apprentice of the Year Award, the Glenn Bivins Award recognizes attendance and punctuality on the job and in the classroom; commitment to the trade, employer and industry; outstanding craft achievement and productivity; leadership skills; teamwork; safety awareness; a spirit of competitiveness; and community service.

“It’s his dedication to the trade that really impresses me the most,” said Doug Adams, Uldriks’ welding instructor at the RMTC who worked with WMU’s joint apprenticeship committee to nominate him for the award. Adams also cited Uldriks’ talent, work ethic and humility as factors contributing to his nomination.

As industry leaders anticipate a significant number of older employees working in skilled trade occupations to retire over the course of the next few years, manufacturers are expected to seek more young people with skilled trades experience to fill those positions. Apprenticeships like Uldriks’ are one way applicants can increase their skill levels and marketability to employers.

George H. Jarvis, director of the Robert M. Beam Power Plant, said in a letter recommending Uldriks for the award that he is one of the best welders in the plant.

“Mr. Uldriks is a model employee here at the WMU Robert M. Beam Power Plant,” Jarvis said. “His strong work ethic, pride in work, laser-like focus and discipline have enabled him to not only succeed but excel in the apprenticeship program, where he is a role model for others.”

The other Glenn Bivins Award winner for 2012 was Roy Armstead, of Davison. Award winners receive $500 and a trophy including the names of previous winners in honor of their work.