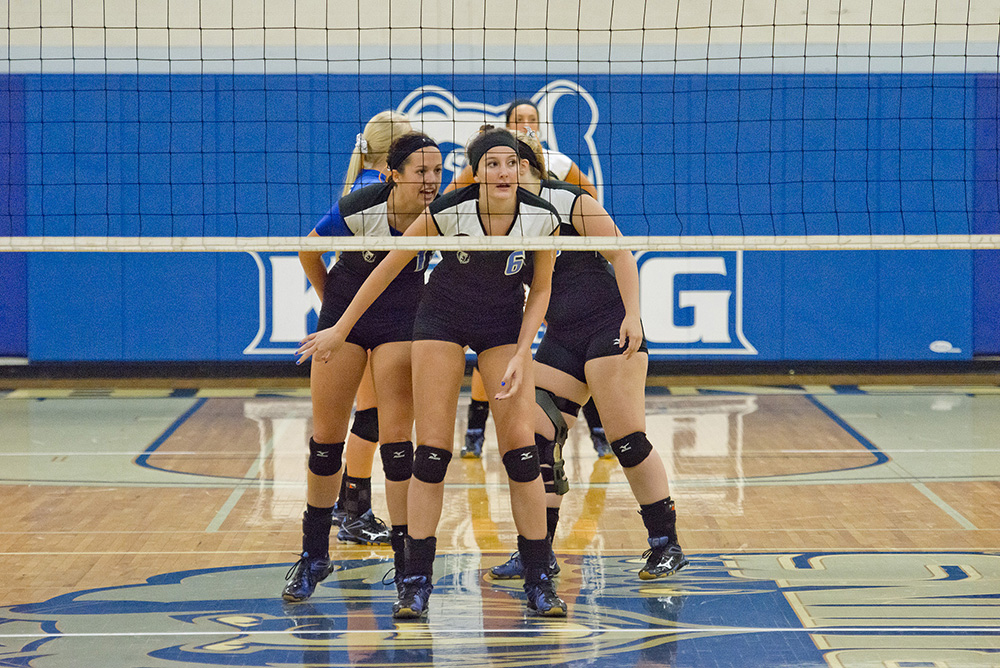 The Kellogg Community College women’s volleyball team continues their downward slide, falling in five away matches since Thursday and bringing their losing streak to eight. Below are scores and statistics from each match.

Vs. Ancilla College
Away match on Thursday, Sept. 25

The Bruins fell to conference opponent Ancilla in three close sets with final scores of 27-29, 22-25 and 25-27, respectively.

Vs. Lawrence Technological University JV
Away match on Saturday, Sept. 27, as part of the Grand Rapids Community College Raider Challenge

On offense for KCC, Crawford had 15 kills, Ehredt had 15 kills and one ace, freshman Kenya House (Riverdale/St. Louis High School) had 17 assists, O’Dell had one ace, and Rybinski had one kill and three aces.

Defensively, Crawford had two assisted blocks, Ehredt had one solo block, House had nine digs and one assisted block, O’Dell had eight digs, and Rybinski had four digs and 16 assists.

“We stuggled to stay on top,” said Amy Julien, the Bruins’ head coach. “We had our ups and downs. We’re just trying to find that W for us again and it just hasn’t happened.”

Vs. Mott Community College
Away match on Saturday, Sept. 27, as part of the GRCC Raider Challenge

Defensively, Browning had one solo block, Crawford and Ehredt had four digs apiece, House had eight digs, and O’Dell had six digs.

Vs. Cuyahoga Community College
Away match on Sunday, Sept. 28, as part of the GRCC Raider Challenge

On offense for the Bruins, Browning had seven kills, Crawford had 16 kills, Ehredt had 12 kills, House had 20 assists, and Rybinski had 16 assists and one ace.

“It was great to see some emotion from Carmen O’Dell,” Julien said. “This was by far the best defensive game she has played at KCC.”

Vs. Lorain County Community College
Away match on Sunday, Sept. 28, as part of the GRCC Raider Challenge

On offense for the Bruins, Browning had six kills, Crawford had 17 kills, Ehredt had 12 kills, House had 18 assists and one ace, and Rybinski had two kills and 24 assists.

The recent losses bring the Bruins’ conference record to 2-5 and their overall record to 4-12 for the season so far.

The Bruins’ next home match — which will serve as the team’s annual Autism Awareness match — begins at 6:30 p.m. Thursday, Oct. 2, against conference opponent Lansing Community College at the Miller Gym. The team fell to LCC in three sets in an away match earlier this season.