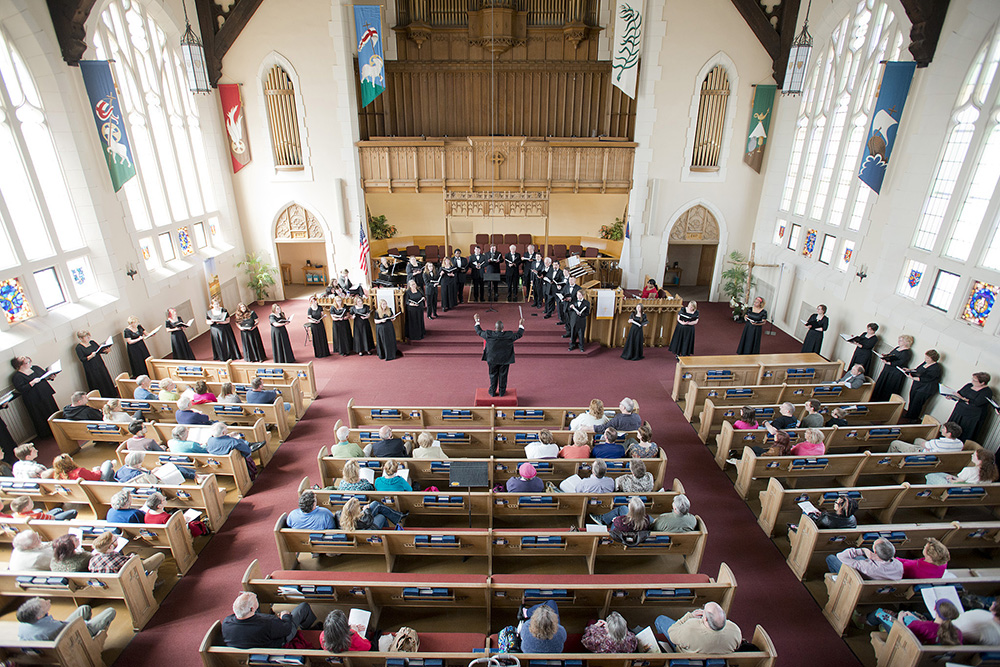 The Kellogg Community College Choral Union will pay homage to the College’s history and celebrate nearly 60 years of the performing arts at KCC with two presentations of Franz Joseph Haydn’s “Missa in Angustiis” (“Lord Nelson Mass”) this month.

Performances of the mass will begin at:

Both performances are free to attend and open to the public, with a freewill donation collected to benefit future KCC music programming.

While a music club was founded with KCC in 1956, a formal choral organization wasn’t formed at the College until the spring of 1957, with the current spring semester marking the 58th year of choir at KCC. The “Lord Nelson” event, in addition to presenting one of the best-loved classical compositions to audiences across the College’s district, celebrates the choir program’s strong tradition at the College and within the community it serves.

Dr. Gerald Blanchard, who has been director of vocal music since 2004 and also serves as the music area coordinator at the College, said the choirs of KCC have distinguished the College’s program through a long and varied history to become the high-quality choral organization firmly established today.

“KCC’s Choral Program has thrived for many years under the leadership of an outstanding faculty and the work of scores of magnificent students,” Blanchard said. “Students and faculty often stay in touch well beyond their time on campus. It is through such a commitment to the arts that our history has been filled with great and continued success.”

The program will open with performances by KCC’s Branch County Community Chorus; a solo organ performance by KCC faculty artist Kathy Cary; opening remarks from the Rev. Dr. Rene Whitaker in Coldwater on April 11 and the Rev. Dr. Jeffrey Carlson in Battle Creek on April 12; and a welcome address from KCC President Dr. Dennis Bona.

The “Lord Nelson” program will follow and include performances by four principal soloists — including mezzo Jennifer Breneman, soprano Betty Picard, bass/baritone Joel Snyder and tenor Dr. Mark Wells — and a chorus consisting of more than 30 KCC Choral Union singers and a dozen vocalists from guest ensemble Ars Voce. The choral performers will be accompanied throughout the event by the 14-piece Haydn Festival Chamber Orchestra, with organist Nancy Brown accompanying on the pipe organ and Blanchard conducting.

Blanchard said the KCC choirs presented the “Lord Nelson Mass” for the first time in 2005, during a performance in Lansing accompanied by the Lansing Area Chamber Orchestra. The work holds personal significance for Blanchard, as it was the first major choral composition he programmed for the KCC choirs after becoming their artistic director. The program for the production includes historical information about his tenure as director since then, as well as that of several of the College’s previous conductors and directors whose leadership paved the way for later generations of music makers.

“This concert will look back and pay homage to the College’s past while embracing its vibrant future,” Blanchard said. “KCC’s music program continues to provide outstanding musical opportunities for students and the community alike, and we celebrate the legacy those who came before by continuing their tradition of providing accessible choral experiences to all.”

Such choral experiences to be offered in the future include:

For more information about KCC’s presentations of Haydn’s “Missa in Angustiis” (“Lord Nelson Mass”) or about music programming or other artistic opportunities at KCC, contact Blanchard at 269-965-3931 ext. 2566 or blanchardg@kellogg.edu or visit www.kellogg.edu/music.

About the KCC Choral Union

A vocal group consisting of members from KCC’s three residential choirs — the Branch County Community Chorus, the Kellogg Singers and the Concentus Vocal Ensemble — the KCC Choral Union has performed at major venues in Michigan, Ohio, Indiana, Illinois, Pennsylvania, New York and Massachusetts in addition to performing in Ireland and Italy on international concert tours in 2012 and 2014, respectively. The ensemble has opened for such groups as the Grammy Award-winning ensembles Take 6 and Sweet Honey in the Rock and regularly collaborates with major musical organizations including the Sacred Music Festival of Kalamazoo, the Battle Creek Symphony Orchestra, the Haydn Festival Orchestra and the Monroe Community Chorale and Symphony.