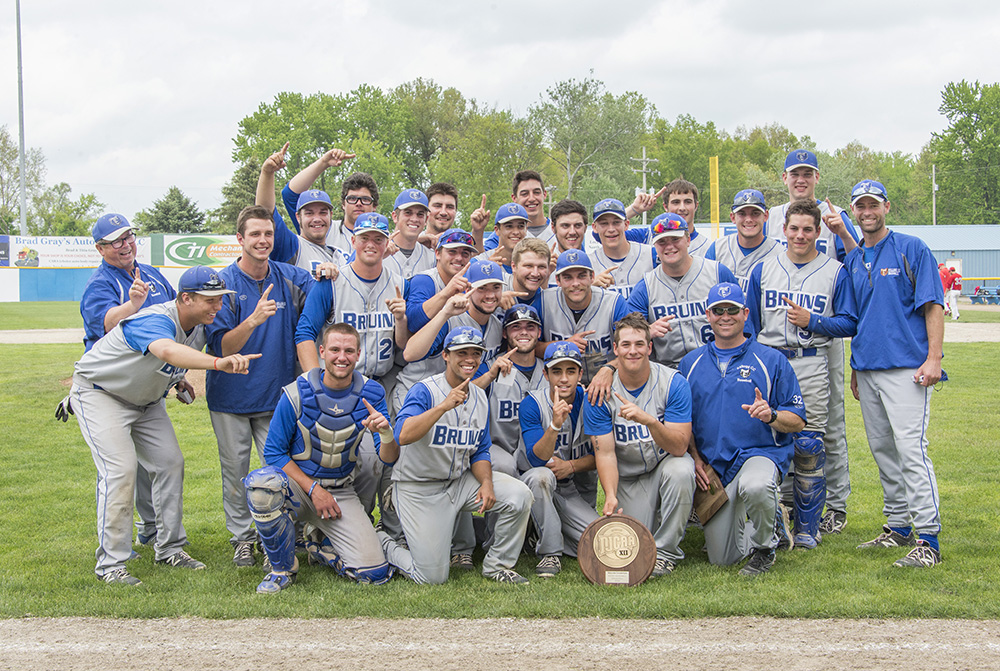 The Kellogg Community College baseball team will play for a national championship title this weekend after winning their regional title on Saturday at Bailey Park in Battle Creek.

The team will play for its first national championship since 2011 as part of the NJCAA Division II World Series, to be held May 23 through 30 at David Allen Memorial Ballpark in Enid, Okla. The Bruins’ first game of the championship series will start at 7 p.m. Saturday, May 23, against a team to be announced.

In addition to taking the regional title Saturday, three KCC student-athletes were recognized as members of the All-Tournament Team, including:

KCC freshman pitcher Tate Brawley, of Niles/Niles High School, was named the tournament’s Most Valuable Player, while Eric Laskovy, head coach for the Bruins, was named Coach of the Year.

KCC won the Michigan Community College Athletic Association conference championship earlier this month; last weekend’s regional appearance was the team’s 10th since 2002. This weekend’s World Series showing will mark the team’s sixth national championship appearance since 1999, when the team finished second in the nation. The Bruins finished fifth in the nation in 2002, second in 2007, eighth in 2009 and fourth in 2011.

Click here for more information about the NJCAA DII World Series from the NJCAA website, including a pretournament packet.

High-resolution team and individual photos of the KCC baseball team – including the post-regionals photo featured above – are available for download for use by fans and the media from the 2015 KCC Baseball album on KCC’s Flickr page.

Kellogg Community College is part of the Michigan Community College Athletic Association and is a member of the National Junior College Athletic Association’s Region 12. KCC athletes are known as Bruins, the mascot’s name is Blaze and the College’s school colors are blue and silver. Sports currently offered at KCC include baseball, men’s and women’s basketball, softball and women’s volleyball. For more information about KCC’s baseball team, visit www.kellogg.edu/baseball.