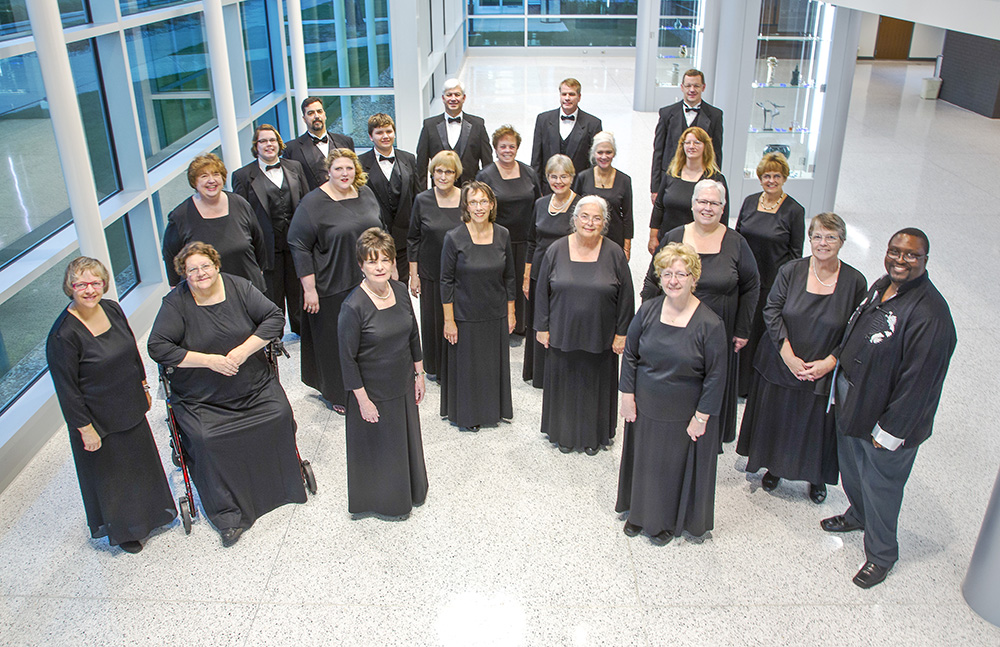 Kellogg Community College’s Branch County Community Chorus will bring the holiday spirit to Coldwater next month with the group’s annual “Sounds of the Season” concert.

“Sounds of the Season 2015: Christmas Memories” will begin at 7:30 p.m. Saturday, Dec. 5, at St. Mark’s Episcopal Church, 27 E. Chicago St. While the concert will be free and open to the public to attend, a freewill offering will be collected to support future vocal arts initiatives at the College, including concert tours and student scholarships.

The concert program will feature holiday classics including “African Noel”; “Beautiful December”; “The Bells of Christmas”; “Break Forth, O Beauteous Heavenly Light”; “Celebrate This Day Together”; “Christmas Memories”; “Dance of the Sugar Plum Fairy”; “Deck the Halls”; “Joy to the World”; and more.

Dr. Gerald Blanchard, music coordinator at KCC and director of the “Christmas Memories” program, said, “This concert will transport you to a time of Christmas past.”

In addition to the BCCC, the concert will include performances from musical guests including KCC’s Choral Union, Concentus Vocal Ensemble, the Kellogg Singers and the T.A.T.T. Vocal Quartet. The audience also “will have several opportunities to raise their voices in song throughout the evening in celebration of the holiday season,” Blanchard said.

The concert will run for approximately one hour, with a dessert reception to immediately follow the performance.

The BCCC is one of three residential choirs at KCC and regularly performs in the Coldwater area, including a “Sounds of the Season” concert at St. Mark’s each December. For more information about the choir, “Christmas Memories” or other vocal arts events and initiatives at KCC, contact Blanchard at blanchardg@kellogg.edu or 269-965-3931 ext. 2566 or visit http://bit.ly/branchchorus.

High-resolution photos of the BCCC and KCC’s Choral Union, shot by photographer Ed Williams, are available for download for use by fans and the media from KCC’s Flickr page at www.flickr.com/photos/kelloggcommunitycollege/sets/72157661511905876.

KCC’s choral area consists of three residential choirs, including the Branch County Community Chorus, the Concentus Vocal Ensemble and the Kellogg Singers. When they perform major masterworks – such as Beethoven’s Ninth Symphony, which they presented in collaboration with the Battle Creek Symphony in Battle Creek on Nov. 14 – the choirs perform together as the KCC Choral Union.

In addition to performing regularly in its home state of Michigan, the Choral Union has performed nationally at major venues in Illinois, Indiana, Massachusetts, New York, Ohio and Pennsylvania, and performed international concert tours of Ireland and Italy in 2012 and 2014, respectively. The KCC choirs have also opened for such internationally renowned groups as the Grammy Award-winning musical groups Take 6 and Sweet Honey in the Rock, and regularly collaborate with major musical organizations including the Battle Creek Symphony Orchestra, the Haydn Festival Orchestra, the Monroe Community Chorale and Symphony and the Sacred Music Festival of Kalamazoo.

For more information about KCC choirs or other KCC music initiatives, including opportunities to study music at KCC, contact the College’s Arts and Communication offices at 269-565-7859 or visit www.kellogg.edu/music.