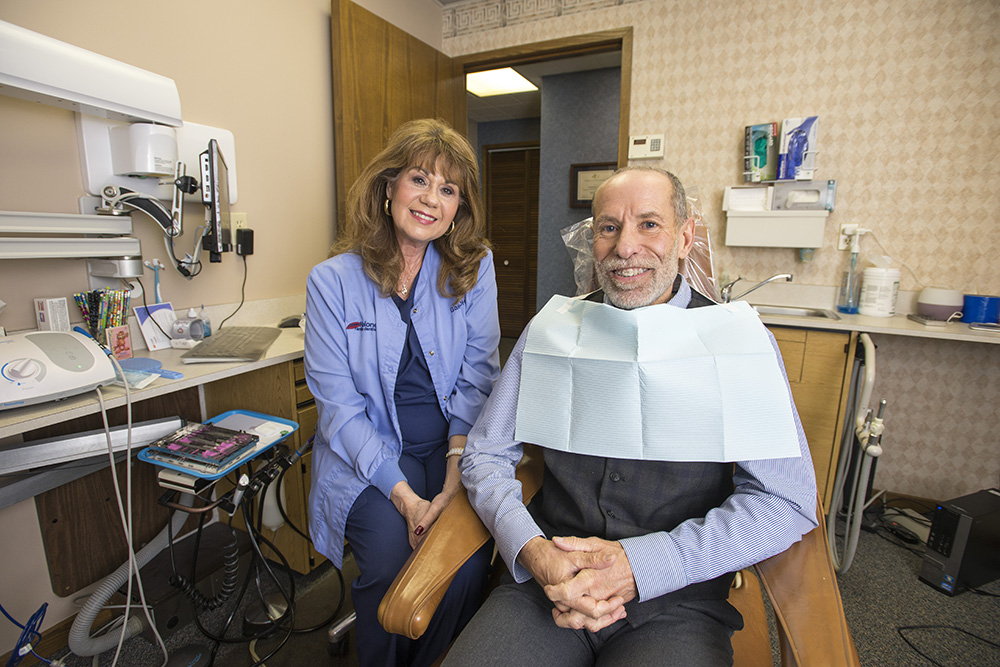 You could say Gail James puts the dental in coincidental.

Working as a receptionist for a dentist in the summer following her high school graduation, James developed an interest in working one-on-one with patients, and she contacted the local college to ask about classes in dental hygiene.

That college was Battle Creek’s own Kellogg Community College, where a new Dental Hygiene Program was starting that very year.

“All the pieces fell in together, and I signed up and I was in the very first class,” James said.

More than 40 years and an entire dental hygiene career later, James’ KCC past met up with her last week while she was seeing her last official patient at Halonen Family Dentistry, where she’s been on staff since 1981. That patient was Kevin Rabineau, Dean of Arts and Sciences and Regional Education at the college, who surprised James before their appointment with current KCC Dental Hygiene professor Bridget Korpela and second-year dental hygiene student Lauren Rubley in the waiting area of the office to congratulate her and thank her for her years of practice.

“It was so much fun, we had the best teachers there,” James reflected on her time at KCC. “They not only taught us the skills but they taught us relationships with patients and they were so enthusiastic that it made you enthusiastic.”

James said she was fortunate to graduate in the field when she did in 1972, as the field was “wide open” in Battle Creek and jobs in the field weren’t hard to find. People were just getting dental insurance at the time, she said, and more and more people were going to the dentist. James worked for two other dentists before settling in at Halonen.

Dr. Rodney Halonen, a founding dentist at Halonen Family Dentistry, said James was just the Halonens’ second employee hired after they began practicing in Battle Creek in 1979. Halonen said James is “more than just an employee,” and it’s been wonderful having her around for all these years.

“She’s a kind and competent and courteous person, so it’s been tough to think about losing her,” Halonen said. “She’s the epitome of professionalism. They trained her well at KCC.”

Now officially retired, James plans on traveling with her husband Gary, also retired, and spending more time with friends and family, which includes five children and several grandchildren. She also enjoys working in the yard and flower arranging, and has done the decorations for several parties and weddings, which she’ll likely continue. She also still plans to fill in as a dental hygienist on occasion, and already has a handful of days scheduled to work at Halonen in February.

But even after more than 40 years in the field, that doesn’t mean it’ll just be more of the same for James in retirement.

“I might pursue some things that I’ve never tried before,” she said. “So we’ll see.”

Pictured above: Retired dental hygienist Gail James, left, sits in her exam room at Battle Creek’s Halonen Family Dentistry with patient Kevin Rabineau, Dean of Arts and Sciences and Regional Education at KCC. James, who was a member of KCC’s first graduating Dental Hygiene class in 1972, saw Rabineau as her last patient before officially retiring from Halonen on Jan. 28. She’d worked as a dental hygienist at the practice since 1981.

Editor’s note: This article first appeared in the Feb. 4, 2016, edition of the Battle Creek Shopper News.