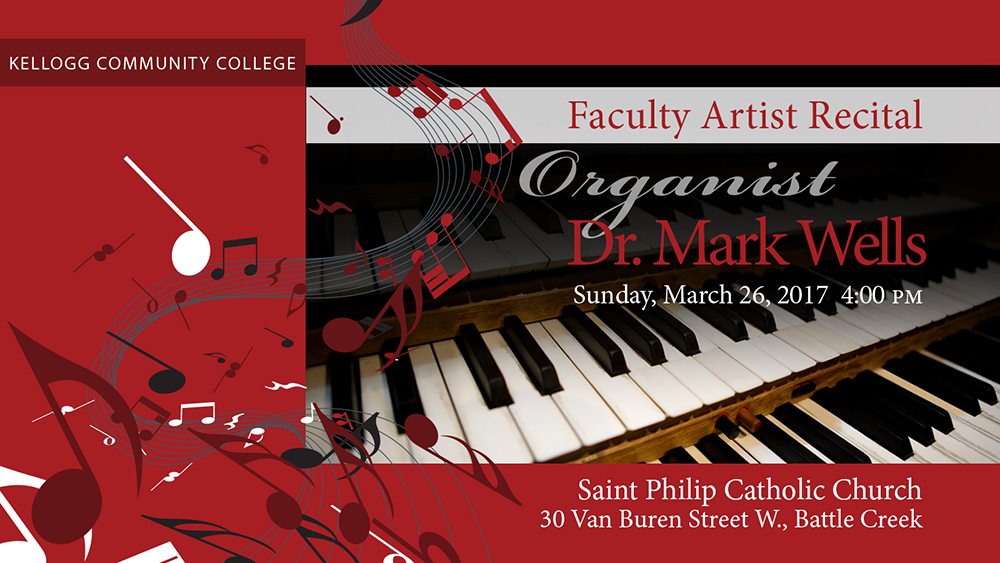 Wells will perform beginning at 4 p.m. Sunday, March 26, at St. Philip Catholic Church, 30 W. Van Buren St. The recital is free and open to the public.

The recital program will include works by composers including J.S. Bach, William Matthias, Josef Rheinberger and Louis Vierne, played on the church’s prestigious E.M. Skinner organ (Opus 787). Skinner organs, this one constructed in 1930 and funded in part by W.K. Kellogg, are highly respected instruments synonymous with craftsmanship and innovation.

Wells, music director at St. Philip Catholic Church and adjunct music instructor at KCC, has been an active member of the Battle Creek music community for more than two decades. A conductor, tenor soloist, organist, pianist and teacher, he regularly performs throughout the state of Michigan and beyond.

A native of Kentucky, Wells received his musical training at the University Of Louisville School of Music and the College-Conservatory of Music in Cincinnati. He’s been on the staff of St. Philip since 1998, becoming the music director in 2011 and overseeing an active music program. Wells has been an adjunct instructor of music at KCC since 2007, teaching voice, piano and music theory, and is the founder and director of the chamber vocal ensemble The Battle Creek Master Singers. A member of the American Guild of Organists, Wells served as dean of his local chapter from 2010 to 2015, and has been heard in performances of the local AGO chapter’s annual Bach Around the Block Organ Crawl, most recently last April.