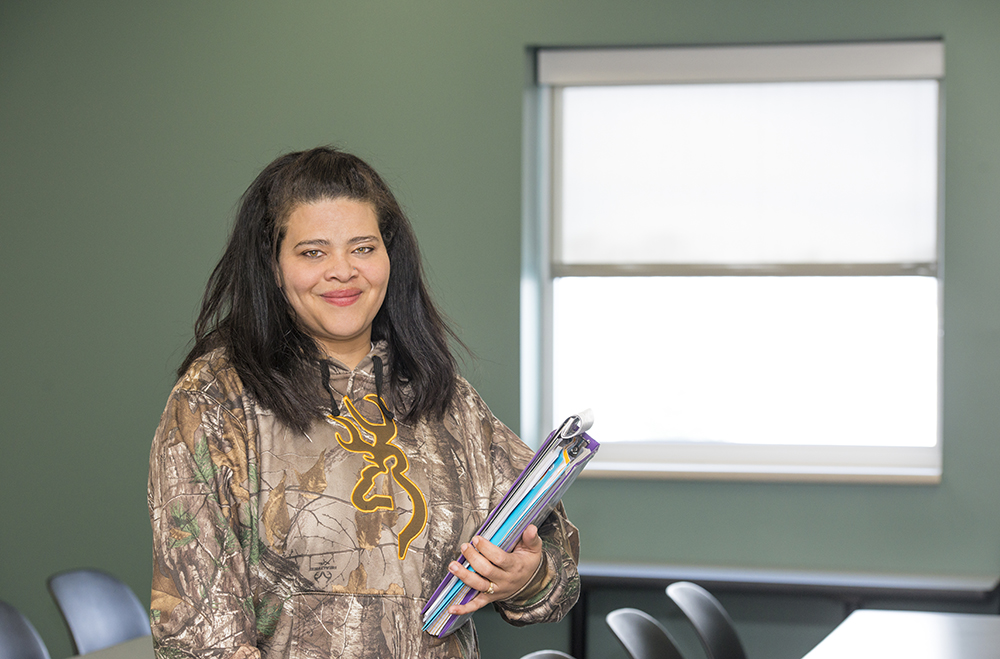 Kellogg Community College student Coretta Margraves is pursuing an Associate in Arts degree at KCC with plans to start her own photography business.

“I love to take pictures, I love to draw,” she says. “I’m kind of one of those people. I like to be behind the lens, not in front of it.”

Margraves, 39, a 1996 graduate of Albion High School, stepped in front of the lens recently to discuss her KCC story, which involves taking a break from the KCC pathway she started in 2009 after her mom died and returning later in part to inspire her own two kids, now teenagers.

College isn’t easy as a working mother, but when she first started, Margraves says, “I actually started to kind of prove to my kids that you could do both. … At any age you can always come back and finish your dreams.”

Margraves’ interest in education and entrepreneurship is an intersection of sorts of her own parents’ interests. Her mother worked in the medical field for more than three decades and was big into education, she says, while her father started his own lawn-mowing business.

Margraves is currently taking a class in American history at KCC’s Eastern Academic Center campus in Albion, where she’s taken most of her classes so far, but she plans on attending at the Battle Creek campus this summer. She anticipates graduating with her art degree sometime in 2019.

“Everything just kind of catches my eye,” she says about her interest in photography. “It’s my down time. It’s my therapy.”

Interested in taking classes at KCC’s Eastern Academic Center campus in Albion? Visit www.kellogg.edu/eastern for details about the campus, or contact EAC Manager Shari Deevers at 517-629-7530 or deeverss@kellogg.edu for more info.