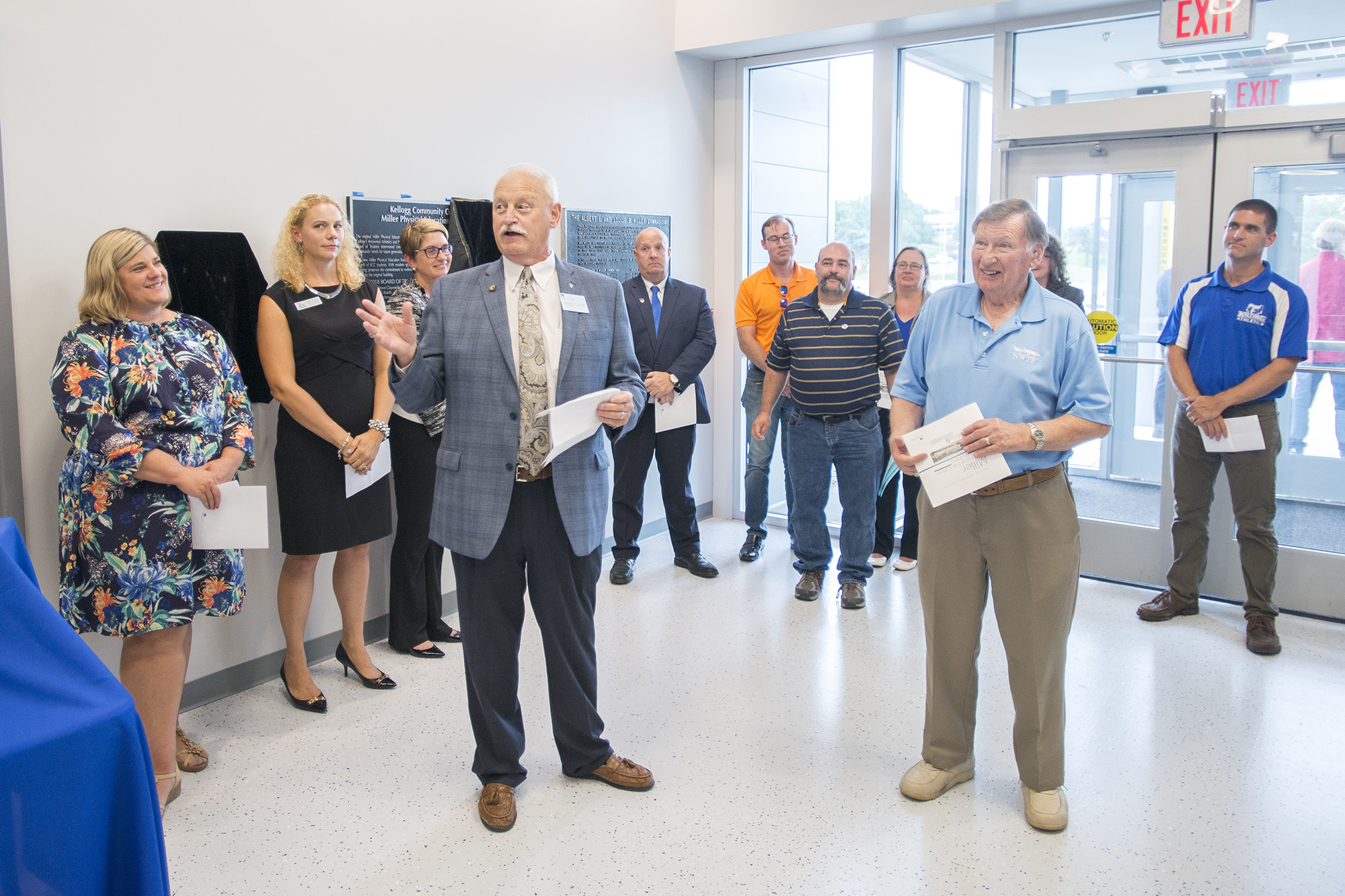 ***UPDATE: The Nov. 9 ceremony honoring Al Bobrofsky has been rescheduled for Dec. 5. Tonight’s men’s and women’s basketball games will proceed at scheduled times.***

“It sure doesn’t look this big from the outside,” Bobrofsky said as he watched a couple of Bruin basketball players practice. “Man, this is really bright.”

It wasn’t the first time Bobrofsky had been in the gym on KCC’s Battle Creek campus at 450 North Ave., Battle Creek. He saw it during the dedication ceremony held Aug. 7 for the finished $10 million project, which began construction in 2017 thanks to funds from a capital millage approved by voters in 2012.

Bobrofsky, 85, knows basketball. He knows baseball and football too, and probably a lot of other sports, but it was his time as a college basketball referee that brought him back to KCC, where he officiated the College’s first-ever basketball game in 1966.

Bobrofsky, a longtime area businessman and former Battle Creek mayor, will participate in a special event at the new facility’s first home men’s and women’s basketball games at 5:20 p.m. Nov. 9, where he and his wife, Ann, will be joined by KCC President Mark O’Connell and KCC Athletic Director Tom Shaw in a presentation.

He’ll even receive a referee shirt.

“This is going to be emotional, with the striped shirt on,” Bobrofsky said. “You guys don’t want me to try to referee or anything. I’m going to stand in one spot and just watch them run.”

The new building also represents growth at KCC, something of which Bobrofsky has been a part. KCC President Mark O’Connell highlighted the role of the Battle Creek Tax Increment Finance Authority, for which Bobrofsky was board chairman, in helping establish the College’s Regional Manufacturing Technology Center in Battle Creek’s Fort Custer Industrial Park.

“I appreciate Al’s continued service to the College and his support over the years,” O’Connell said, “both as a Battle Creek mayor and TIFA board chairman.”

Bobrofsky said he remembers the first game at KCC and that there was a dedication, but not too many of the details. He said he didn’t know beforehand it was KCC’s first basketball game, and that it was also the first time he signed a basketball.

Of course, one great thing about the game is that was a paying gig. In his mid-20s and pursuing a career in the graphics industry with Eastman Kodak, Bobrofsky was looking forward to getting to stay involved in sports, have some fun and earn some side money.

Bobrofsky said the rate for high school games was usually $7.50.

The referee went on to officiate games for the next three decades, only stopping because he was getting involved in politics and didn’t have time to divide between the two pursuits. Over those years, though, he saw a lot.

Bobrofsky is pretty sure he’s the only referee to work a game where Earvin “Magic” Johnson played at three pre-NBA levels: junior varsity, varsity and at Michigan State University.

One time, by accident, Chuck Turner, who would go on to become a well-known Battle Creek Central High School basketball coach, elbowed Bobrofsky, taking out a tooth.

The civil rights tension in the mid-1960s even came to Bobrofsky’s court. He remembered a varsity game at the time where police were concerned fights might break out. He said the referee crew was escorted down I-94 and into the building.

The game was moved to 4 p.m. and no spectators were allowed, except for the junior varsity teams.

In that same period, at another high school game, a riot broke out, Bobrofsky said, and some people were trying to break into the room where the referees had taken shelter. The crew was saved, he said, by one team’s basketball coach and a few other people.

“That was very close,” Bobrofsky said.

Bobrofsky also recalled the camaraderie and competition between referees. He remembered two times when a referee was injured or sick, he was almost pressed into service. Once was while he was a spectator at a Notre Dame game, but he didn’t have his ref gear with him. Another time was at a Western Michigan University game he wasn’t at.

Bobrofsky was told later he was paged over the WMU PA system, just in case he happened to be there.

Another time, at a high school football game he was working, another referee collapsed and Bobrofsky sprang into action, performing CPR until doctors arrived.

Such stories, though, are part of humanity, something Bobrofsky said was part of athletics. That’s the reason he officiated all those years. He’s a sports fan — although he finds himself still watching the refs more than the game — but he also got to play a role in young people’s lives.

Recalling KCC games, of which Bobrofsky said he must have officiated dozens over the years, made him think about the old building and the new one. Among the gym, expanded classrooms, weight training facilities and other impressive features of the new Miller Building, it was the dedicated space for referees to change into their uniforms that caught his attention.

Bobrofsky is looking forward to the upcoming event, but hopes a lot of the focus stays on the athletes.
“And it takes more than just the players,” he said. “It takes the coaches and the administration of the school. And the people that are involved in it.”