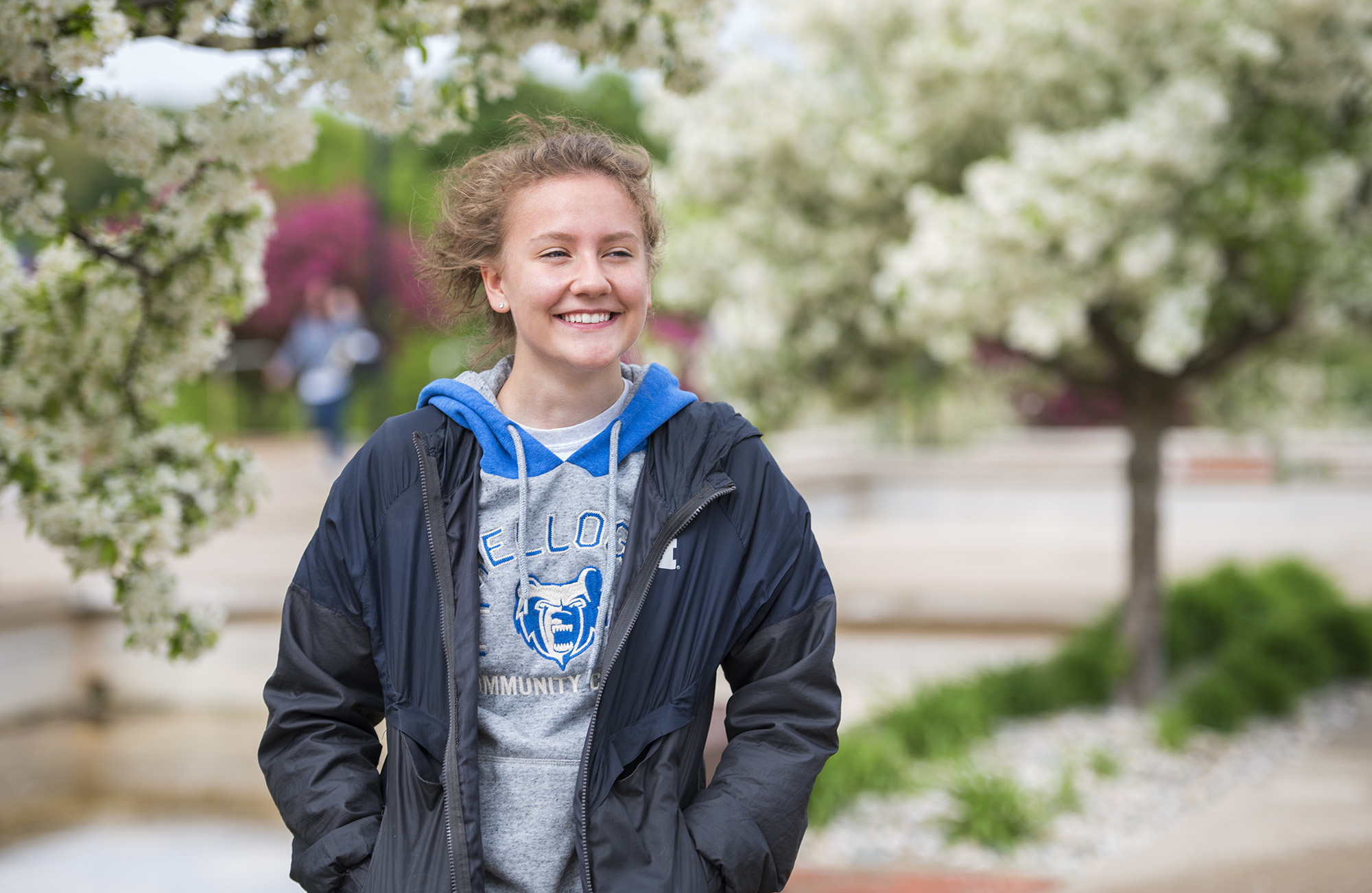 She’s ranked fifth outof 87 students in her graduating class at Delton Kellogg High School, and has a 4.013 high school GPA.

“Choosing to dual enroll at KCC was one of the best decisions I ever made,” Cooper said. “It has been an amazing experience.”

Cooper, 18, added 20 Advanced Placement credits to 73 college credits earned while dual enrolling at KCC her sophomore, junior and senior years of high school. When she walks in the Delton Kellogg commencement ceremony May 30, it’ll be her third commencement: She walked in KCC’s ceremony last spring after earning her Accounting Certificate and again earlier this month after earning her Business Management Certificate and Associate of Applied Science degrees in both Accounting and Business Management.

Dual enrolling at KCC helped Cooper get a jump on her dream of attending the University of Michigan in Ann Arbor, where she’s enrolling this fall as a statistics major.

“It’s academically stimulating,” Cooper said. “It makes me think, and I like that.”

Another statistic: When Cooper, daughter of Michelle and Tim Cooper, enrolls at U of M this fall, she’ll be the first in her family to attend a four-year school.

That’s according to her father, a KCC alum who graduated in the late 1990s with an Associate in General Studies and a Certificate of Achievement in Computer Information Systems. He was initially recruited to work in information systems at Kellogg’s, and has worked with HUB International for the past 18 years, along with Michelle for the last nine years.

He said the family was watching the news in 2016 when they saw a report about a high school student graduating from KCC while still in high school.

“We saw that and said, see, a sophomore just graduated, you can do that too,” Tim Cooper said.

In true statistician form, the family put together a spreadsheet of the classes Lily would need to take to earn her accounting degree. It was good she started college early, Lily Cooper said, as she decided about halfway through her degree that she wanted to change her focus at KCC to business management.

Starting at KCC as a dual-enrolled high school student let her find her passion with less pressure than she would’ve faced at a more expensive four-year school. Her high school covered the cost of two classes per semester.

“I was first going for accounting, which I discovered I do not like. Now I have the rest of my life to do what I do want to do,” Lily Cooper said. “I didn’t have to pay an arm and a leg.”

Starting college at the age of just 15, she said she was initially nervous, but her time at KCC helped open her up to new experiences.

“I was really shy,” she said, “and now I’m not afraid to jump into something new.”

Dual enrollment also opened other doors for her, Cooper said. She met a lot of people and had a lot of fun at KCC, and after three years of school in the area she’s become pretty familiar with Battle Creek. She’ll also be familiar with the college experience going into U of M this fall.

“Academically I know what I want to do,” she said. “I know what college feels like, and I know that I’m gonna have to work hard for what I want.”

Cooper is used to working hard. Delton Kellogg math teacher and KCC adjunct Todd Kroes – who Cooper said “is probably the one teacher that has influenced me the most” – taught Cooper in Algebra 2 and AP Statistics, and called her a top-performing student who’s always prepared, on time and working hard. She’s naturally kind to others and willing to help, he said, and is involved in several school activities.

She’s been involved in Student Council all four years of high school, rising from a representative as a freshman to treasurer her sophomore year, class president her junior year and executive president this year, when she also served as president of the National Honor Society. She’s also been involved in quiz bowl, theatre, robotics – she served as team captain her junior and senior years – the Interact Club, volleyball and track and field at Delton Kellogg, in addition to working 10 hours per week at a local restaurant.

At KCC she’s a member of Phi Theta Kappa and has been named to the College’s Dean’s and President’s lists for academic achievement, graduating with high honors for both of her degrees. And she was recently honored as one of just 32 recipients of the $1,000 Youth Scholarships awarded by Advia Credit Union’s Advia Foundation this month.

“What amazes me so much about her is how much she does, yet she never seems stressed out or tired,” Kroes said. “She is always learning and exploring.”

He and Cooper play cribbage, he said, and this year she took a woodworking class so she could make a cribbage board. The result was a walnut cribbage board in the shape of the U of M logo, which Kroes called lovely.

“This is just another example of Lily learning a skill to achieve a goal,” Kroes said.

Cooper isn’t 100 percent sure what she wants to do once she graduates from U of M, but she has plenty of time to figure it out: Her plans include pursuing at least a master’s degree and possibly even a doctorate.

With statistics, she said, “you could basically work for any company. Everybody uses stats.”

She has a few high school friends who also dual enrolled in college classes, she said, but none with the number of credits that she has, though she’s confident that “anybody could do it” if they commit themselves. The resources are available, she said, people just need to take advantage of them.

“I think most people are just scared. They don’t know what to expect and they don’t think they can do it,” she said.

Like starting college while still in high school, she approached it with an open mind.

“You just learn while you’re there,” she said. “And that’s what college is, learning. And I don’t think people realize that. They think you have to go in knowing everything, when you go in knowing nothing.”

Two associate degrees later, no one can say Cooper knows nothing. The statistics don’t lie.

For more information about dual-enrollment at Kellogg Community College, visit www.kellogg.edu/high-school-dual-enrollment or contact KCC’s Admissions office at at 269-565-2042 or dualenrollment@kellogg.edu.