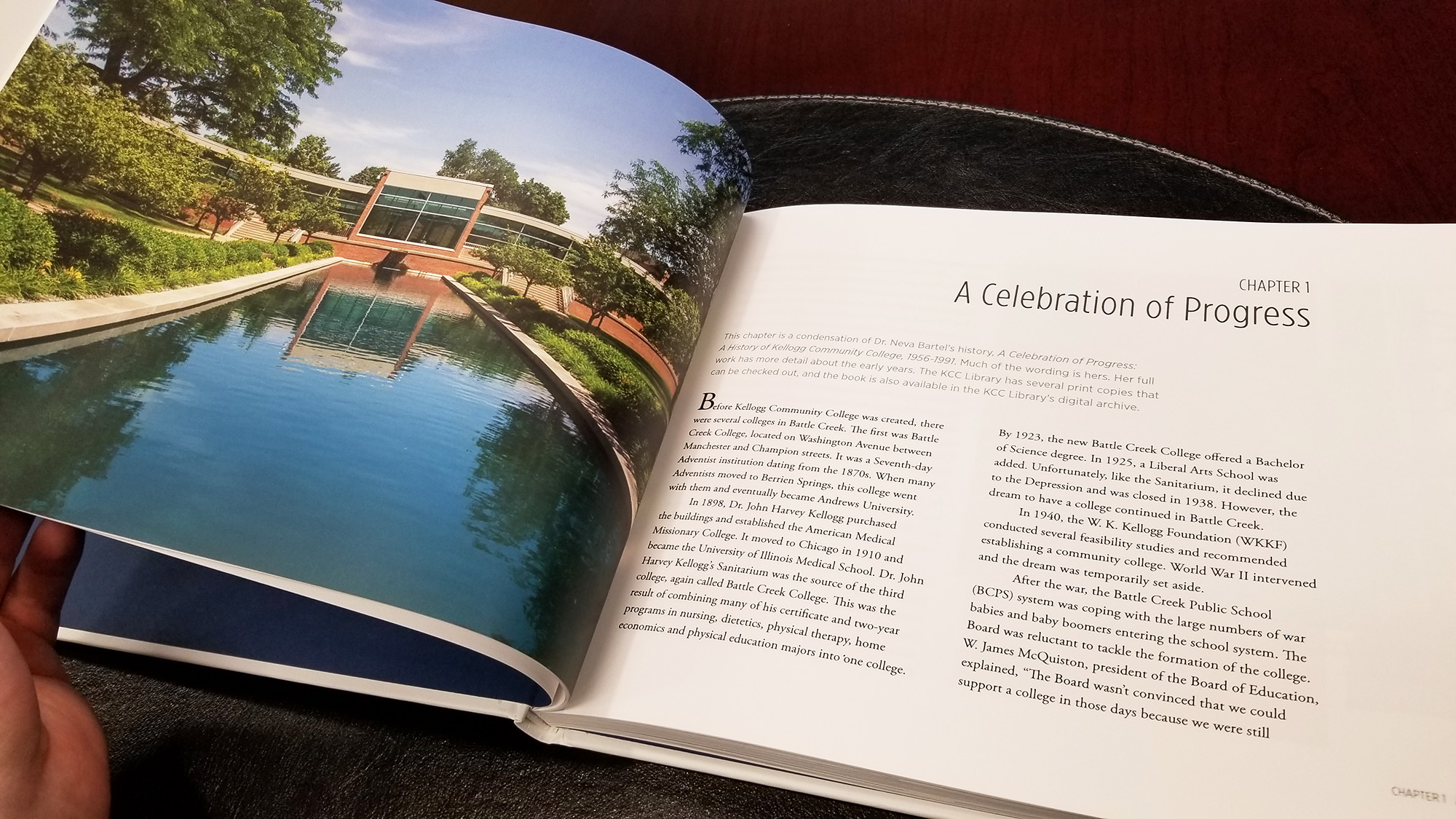 The event will be on the lower level of the Morris Library on KCC’s campus, 450 North Ave., Battle Creek. Attendees will be able to meet Neumeyer and receive a copy of the book published this month by KCC.

A brief program will begin shortly after 10 a.m., featuring Neumeyer’s remarks on the book and KCC history, followed by KCC Media Design Manager Kathryn Jarvie talking about the design process for the book.

Artifacts from KCC’s history also will be on display in Room 102 of the library, and in two display cases on the first and third levels of the library. Light refreshments will be served.

“My family jokes that they can’t go out with me without at least one former student coming up to me and thanking the College for being there,” Neumeyer said. “Our College has provided many leaders for other groups in the community, especially for nonprofits but also for economic growth.”

It’s those people, and the wider community, to whom KCC belongs, Neumeyer said.

“I hope that people realize that this is their community college,” Neumeyer said. “Throughout the book, I emphasized that ‘community is our middle name.’”

That concept, she said, is realized through people who financially support KCC at the ballot box and through taxes, and those who volunteer their time to serve on the College’s Board of Trustees.

Telling the history of those people and many others who made KCC what it is today was personal for the author, who is a graduate of Delta College in Bay City and taught history and psychology at KCC until her retirement in 2007.

“I did not know what I wanted to be in terms of a career,” Neumeyer said. “I just knew I wanted to go to college and I was the first of my family to do so. I think it also helped me be a better teacher because I knew what it was like to be first generation. Many of my instructors took time to encourage me and I worked to pay that forward at KCC as well as in our whole community.”

The personal connection to her subject also taught her a few things while Neumeyer researched and wrote.

“I was surprised how much I learned about the place in spite of having been here 39 years,” Neumeyer said. “Lots of far-reaching and exciting things were happening and I was oblivious. I found it out while I was researching and interviewing people. It was hard to stop interviewing.”

When designing the book, Jarvie kept it “simple and elegant” to merge visual aesthetics with text, leading to a horizontal format for the book. Timelines, historical photos, graphics and other elements combine with a generous use of white space to create something inviting for the reader.

“My aim was to make the book pleasing to the eye as well as be a good read,” Jarvie said. “I also liked a suggestion from Elizabeth to start each chapter with a full-page photo. This led to my decision early on to go with a horizontal format.”