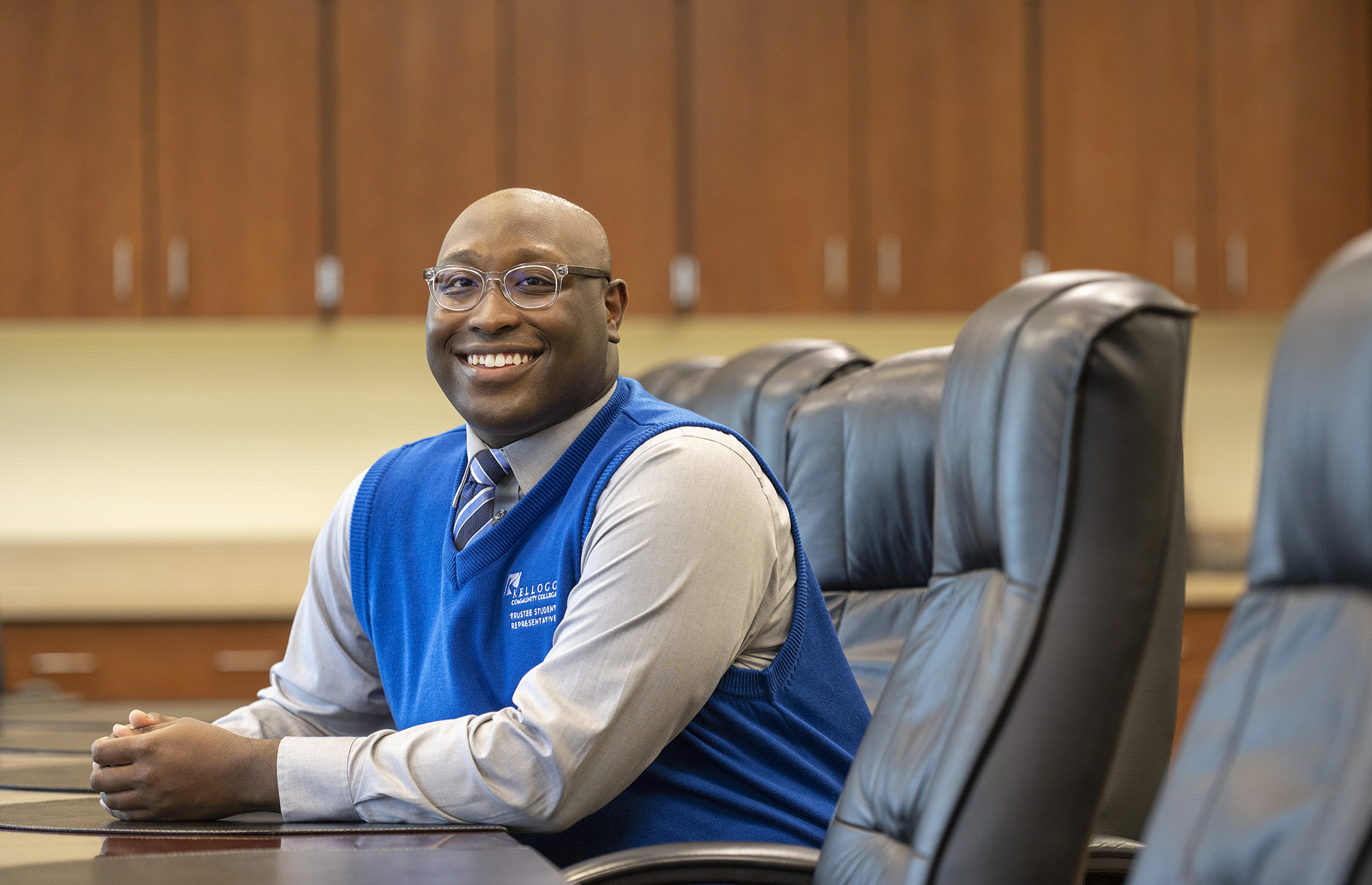 Jaylyn Taylor thought he was almost done when he was really just beginning.

It was January 2019, midway through his second year at Kellogg Community College, and he’d had a good run. Academically, he was on the President’s List, an honor reserved for degree-seeking students with a 4.0 grade-point average. He was a member of the international honor society, Phi Theta Kappa, and was an active Bruin on campus and off, traveling to Greece with the College on an international travel excursion the previous fall.

After graduating from Lakeview High School in 2017, his plan was to take advantage of the Legacy Scholarship program and complete his general education credits for free at KCC before transferring to a university. When he found himself among a handful of students speaking about their study abroad experiences to the KCC Board of Trustees during the board’s January 2019 meeting, he was well on his way to completing that goal.

But Taylor made an impression that night, and fate had other plans.

The board had been looking for a representative to provide a student perspective at its regular board meetings, and asked Taylor if he’d be interested. He was, and by that March he was attending his first meeting as the College’s first-ever student representative to the board, a position he’d ultimately hold through June 2020.

He’d decided to stay at KCC for another year, and he graduated in May 2020 with an Associate in General Studies degree.

To Taylor, the role was about representing student interests to the board on decisions that would ultimately range from the more mundane administrative tasks to issues of tremendous impact, including the selection of a new College president.

“I think there is something about having a legacy and being able to make your mark on something in a positive way,” Taylor said. “I felt honored to be asked and thought it would be a great opportunity.”

Terah Zaremba, dean of Student Services at KCC, is the one who initially asked Taylor to serve on the board. She met him at the board dinner the night he spoke about his experiences in Greece and was impressed immediately.

“Jaylyn has a unique blend of natural talents, genuine interest in learning, and personal character that I’ve not often seen in students,” Zaremba said. “He also has a passion for humanity, a genuine care and concern for all people. He assumes the best in others, has a deep well of positivity, and can see issues from multiple perspectives.”

In short, she had found their student rep.

“The timing was really just impeccable,” she said.

Today Taylor, 21, of Battle Creek, says he “was not too keen” on attending KCC at first. Friends were going straight to universities, and he wanted a similar college experience. High school graduation was bittersweet, he said, and while he was happy about moving forward he was also going to miss the comforts of high school, where he’d spent four years in band and as a member of the DECA student organization.

After four years building to successes in high school – his senior year he was awarded the prestigious John Philip Sousa Award in band, was co-president of DECA and was selected by faculty for the Senior Business Student of the Year Award – the ending felt abrupt, he said, and “unresolved,” a feeling that would follow him into his first year at KCC.

“I mainly spent my first year going to class, going to work and going home,” Taylor said. “I did not get really involved in anything my first year, other than volunteering at the food bank for service-learning.”

But Taylor ultimately grew to appreciate his experiences and opportunities at the community college level, where he was able to better connect with his professors, build relationships with classmates and “grow in a student-focused environment that fosters the importance of being in a diverse community of people from different walks of life.”

And his experiences in high school would ultimately prepare and fuel him for his work on the board at KCC.

“I am a fond believer that everything that happens to us in life can be a form of preparation for future challenges or opportunities that may come our way,” Taylor said. “Becoming Jaylyn Taylor, the student representative on the KCC board, was not a night and day thing. It was years of growth, learning and building soft skills throughout my years in secondary school.”

An advocate for students

Taylor’s work on the board included the creation of a monthly agenda to present at each board meeting; engaging with other students to gauge their experiences and opinions about various issues related to the College; and collaborating with staff from the College’s student newspaper, The Bruin News, to help inform the KCC community about what took place at each board meeting.

Early on, he’d meet with Zaremba in advance of board meetings to review the agenda and discuss what to share.

Soon, she said, “Jaylyn didn’t need my input in determining what to share with the board; he has a natural talent at reading a room, entering a conversation, and balancing thoughtful listening with intentional comments.”

Taylor said his initial work was focused on discussing the value of student feedback and “continuing the work to decrease the gap between the administration and the board’s relationship with the students.”

He also kept the board abreast of current issues related to the student experience, Zaremba said, “such as reminding them that students were preparing for midterm exams, and how appreciative the students were for outstanding faculty support.”

One of his more memorable student representative activities was participating in Community College Day activities with then KCC President Mark O’Connell, board members and Chief Communications Officer Eric Greene in April 2019, when he had the opportunity to speak with officials in the state capital about his experiences at KCC.

As other students were thinking about Spring Break, Taylor was advocating with state legislators on KCC’s behalf.

“I discussed the importance of efficient transfer agreements and policies between two-year institutions and four-year institutions, the value of dual enrollment and early college programs for high school students, and the manufacturing, skilled trades and applied technology opportunities offered at our Regional Manufacturing Technology Center,” Taylor said.

That summer and fall, Taylor’s experience deepened as the Board of Trustees began in earnest its search for the College’s new president, which ultimately culminated in the hiring of Dr. Adrien Bennings, who started in January 2020. Taylor was a member of the KCC Presidential Search Committee, helping narrow the candidate pool from 54 to four final candidates, and he participated in the public student forums and board interviews with each candidate that followed.

“As the student representative, I was not only able to interview the candidates with the board, but I also was able to give my feedback to the board about what the students were looking for in their next president,” Taylor said. “The night that the board announced Dr. Bennings as president, I remember feeling honored that they entrusted me to have such a massive responsibility in the presidential search process.”

Zaremba said Taylor not only voiced meaningful opinions during the search committee meetings, he also played “an enormous role” in engaging other students in the process by helping to recruit students to participate in student input forums, providing the board with critical student feedback on each presidential finalist.

Dr. Bennings’ first interaction with Taylor came as she was visiting KCC as a candidate for the president’s position last fall, when he was her escort between interview sessions on campus. She said it was a busy, hectic day, but as nervous as she was, Taylor had a demeanor “both professional and refreshing at the same time.”

“He has an executive presence about him, and calm confidence that will prove valuable in his continuing academic and professional career,” Bennings said. “He’s someone that I envision will be on the cover of Time magazine because of his influential nature and ability to take the lead on critical issues.”

The final months of Taylor’s tenure on the board were marked by a strong advocacy for students in need of reliable transportation, many of whom have limited access to personal vehicles or public transportation.

Dr. Bennings said Taylor’s advocacy on student transportation was one of his most notable contributions, and had a real impact on potential future practices at KCC.

“His input highlighted the challenges of being a student, beyond the classroom,” Bennings said. “As a result, I have brainstormed a few ideas to create opportunities for community partnerships and programs to alleviate transportation barriers for our students.”

Taylor also advocated strongly for students experiencing difficulties transitioning their studies online as a result of the impact of COVID-19 this past spring, and for students whose school and work schedules were upended by the pandemic, making sure those students’ voices were heard by the board.

“While some students had a pretty smooth transition, some students experienced obstacles with the internet/computer connectivity and a lack of vital resources such as food,” Taylor said. “Also, many of our students who were essential workers experienced increased work hours due to being understaffed. That included our health care students who were balancing working at health care facilities during a pandemic and rigorous online coursework to meet the state requirements on time. I am glad to have been able to advocate and be the voice on behalf of the students to the board.”

Dr. Bennings said Taylor “exudes the character of someone who is destined to be a trailblazer,” and set a high bar for future student participation on the board.

Looking back, Taylor said he’s grateful for his experiences as a student rep, which pushed him out of his comfort zone, helped him grow as a professional and learn more about higher education, the Battle Creek community and the student experience at KCC.

One of the biggest takeaways was learning how much collaboration and teamwork goes into the work of managing a college.

“Everybody has a crucial role,” Taylor said. “It is the community members, students, staff, faculty, administrative staff and board members that make KCC what it is. Together we create success in our institution and our mission by providing accessible, high-quality education to enrich our community and the lives of individual learners.”

All of it adds up to knowledge and experience that will serve Taylor well as he transfers to Western Michigan University this fall to pursue studies in social sciences and the humanities and possibly a career in education policy. Educators have had a significant positive impact on his own life, he said, and it’s an impact he wants to be able to pass on to others.

Taylor went from being a guest speaker at a board meeting in January 2019 to becoming the College’s first-ever student board representative, making a real impact on the daily life of KCC students. He didn’t know it at the start, but taking advantage of that unexpected opportunity and the experiences that followed would help him find a passion for student advocacy, shaping his own future in the process.

“Being on the board confirmed my passion for wanting to work within the education field somehow, because I know in addition to my family and friends, I would not be where I am today without the support of educators in my past and present,” Taylor said. “I want to be able to have a similar impact on students that my educators did for me.”

For more information about the KCC Board of Trustees, visit www.kellogg.edu/board-of-trustees. To share your KCC story, fill out the Your KCC Story form on our website at www.kellogg.edu/yourkccstory.