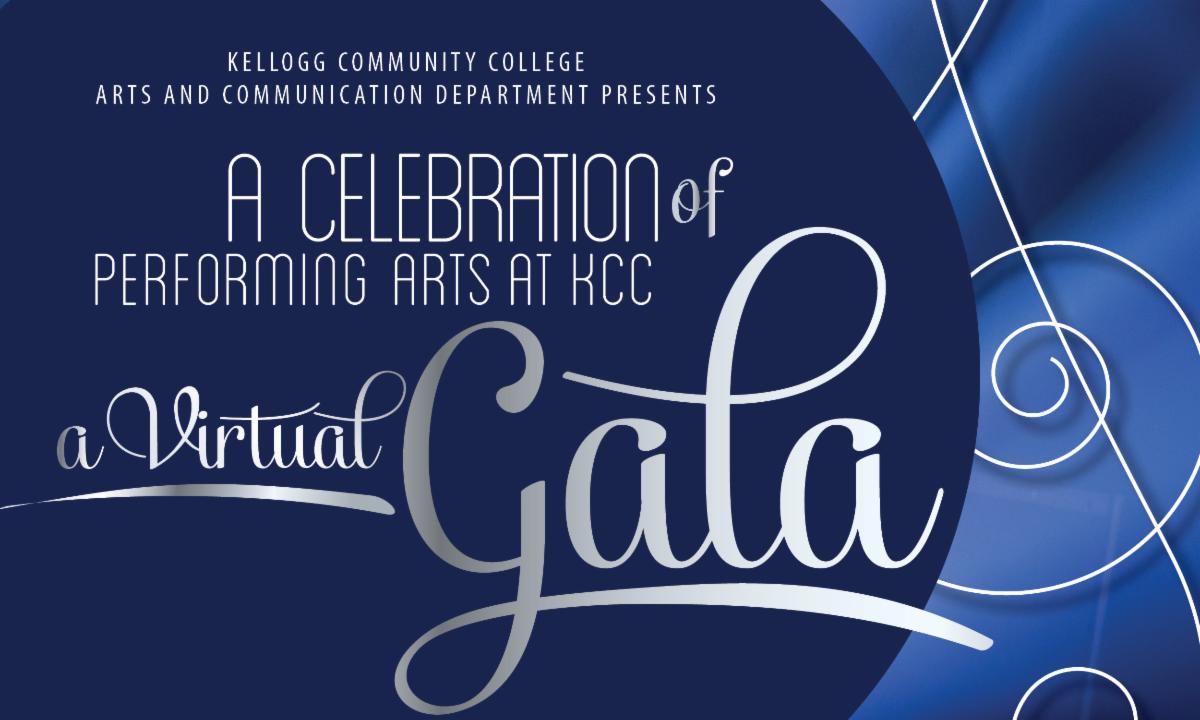 The Arts and Communication Department of Kellogg Community College will celebrate more than 60 years of community music and theatre at KCC with a virtual performing arts gala in April.

The online event, titled “A Celebration of Performing Arts at KCC: A Virtual Gala,” will stream live from 7 to 8 p.m. Tuesday, April 27, on the College’s YouTube channel at www.youtube.com/user/KelloggCommunityColl. The event is free and open to the public, but virtual attendees are asked to register in advance at www.bit.ly/KCCGala21 or by calling 269-965-4161.

Registrants will receive an email with a direct link to the gala livestream in advance of the event.

KCC Arts and Communication Chair Barbara Sudeikis said the gala is a testament to the College’s legacy of supporting the performing arts in Battle Creek and beyond.

“We are extremely proud of our KCC students and faculty members, who during this time of unprecedented challenges have continued to dedicate themselves to enriching their community through the arts,” Sudeikis said. “This gala is a culmination of hard work, planning and long traditions of excellence in music and theatre that have become part of the fabric of KCC and the communities we serve. We are so pleased to have this opportunity to wow our audiences through their screens as we would traditionally wow them from the stage.”

The gala will feature pre-recorded performances and live remarks from KCC students and faculty, including KCC Theatre alumnus Lance Barber, who currently stars on the CBS sitcom “Young Sheldon.” (See the gala program below.)

KCC Theatre professor Brad Poer said KCC Theatre has played “a constantly evolving role in expressing the hopes, values and dreams of our institution, our community and our world.”

“Dozens of directors, technicians and instructors have passed the baton to each other over the years, but it’s been the hundreds of cast and crew members and thousands of audience members that have gotten the greatest reward from our work onstage,” Poer said. “Through six decades of plays, musicals, operas and smaller performances and projects, it has always been the creative force of collaboration between all sorts of personalities and experience levels working and playing together through which KCC Theatre has told powerful, engaging stories about what it means to be human, as we hone leadership and problem solving skills among our casts and crews in the process.”

The gala celebration will double as a fundraiser to support future performing arts initiatives at the College, including future theatrical productions and concert tours. Individuals interested in donating can do so online in advance through the registration link above, or via the link provided during the event.

Dr. Gerald Case-Blanchard, director of Vocal Arts at KCC and coordinator of the College’s music programming, said celebrating the performing arts is “a celebration of all that is beautiful in our world.”

The Virtual Gala will include remarks from College officials, including KCC President Dr. Adrien Bennings and Vice President of Instruction Dr. Paul Watson, in addition to Sudeikis, Case-Blanchard and Poer. The program will also include the following performances:

The program also will feature a music and theatre collaboration featuring a performance from the cast of KCC’s upcoming 2020-21 production of “The Wiz,” with choreography by Shantese La’chy Robinson, artistic direction under Poer, music direction under Case-Blanchard and featuring Lori Hatfield as principal pianist and associate music director.

For more information about “A Celebration of Performing Arts at KCC: A Virtual Gala,” contact KCC’s Arts and Communication Department at 269-965-4161.

A media kit including current and archival photos and other media materials for use by the press can be viewed online at via the link at www.kellogg.edu/media. Additional materials can be requested by contacting Digital Marketing Manager Simon Thalmann at thalmanns@kellogg.edu.