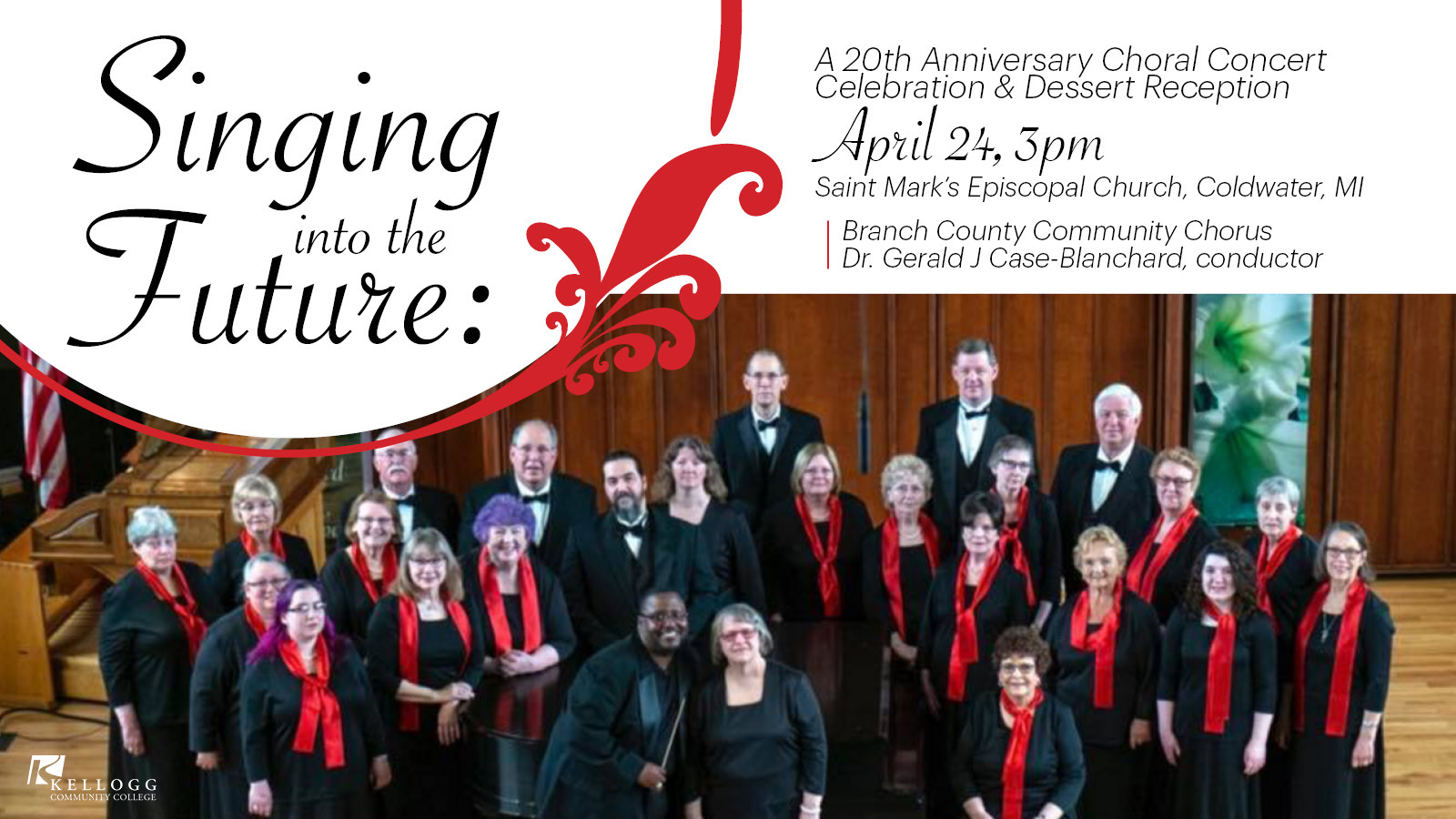 The BCCC will present “Singing Into the Future: A 20th Anniversary Choral Concert Celebration & Dessert Reception” beginning at 3 p.m. Sunday, April 24, at St. Mark’s Episcopal Church, located at 27 East Chicago St. in Coldwater. The event is free and open to the public, though a freewill offering will be collected to support future music initiatives at the College.

BCCC Director, KCC Director of Vocal Music and Music Area Coordinator Dr. Gerald Case-Blanchard said for the past 20 years, the BCCC members have found commonality in the dedication to learning and performing history’s best choral offerings in Branch County and beyond.

“The BCCC has something for all who love the choral arts. They are a community of folks who simply love to sing,” Case-Blanchard said.

The upcoming concert will include nearly two dozen selections, both secular and sacred, that the choir has performed over the past two decades. The choir will also add some newly introduced works ranging from the Renaissance to Broadway theatre.

“There will certainly be something for all to enjoy,” Case-Blanchard said.

The Branch County Community Chorus is a non-auditioned, mixed ensemble whose members are drawn from Coldwater and the surrounding area. This ensemble seeks to explore repertoire not accessible to the average church choir. A wide range of choral music is prepared for performance in the Branch County area and beyond. Everyone is welcome to participate in the ensemble, which can be joined for personal enrichment or for academic credit.

The Branch County Community Chorus, established by founding director Deric Craig in the fall of the 2001-02 academic year, is a “town and gown” ensemble that produces high-level concert performances. Membership is open to anyone who wishes to sing with the group. Under the leadership of Dr. Gerald Case-Blanchard, who became BCCC director in 2004, the choir greatly expanded its repertoire to include not only the traditional classical repertoire (including works by Bach, Handel, Mozart and others), but jazz, show music, world music, spirituals, opera choruses and much more. During its 2006-07 concert season, the BCCC began a semi-annual choral touring program. The choir has since toured nationally and internationally, presenting concerts in the U.S. in Illinois, Pennsylvania, Indiana, Massachusetts, Michigan, Minnesota, New York, Ohio and Wisconsin. In the summer of 2012, the BCCC embarked on its inaugural European concert tour, presenting concerts in Cork, Dublin and Malahide in Ireland. The choir returned to Europe in the summer of 2014, presenting concerts in Rome as well as in towns and cities along the Amalfi Coast of Italy. The ensemble will embark on its seventh concert tour in Summer 2025.

Dr. Gerald J. Case-Blanchard became the director of vocal music at KCC and the new conductor of the Branch County Community Chorus in the fall of 2004. Case-Blanchard has maintained the long-established tradition of producing high-quality choral music while making it accessible to all. Under his leadership, the BCCC and the KCC Choral Program as a whole has continued to grow and flourish.

A key component to Case-Blanchard’s philosophy is the concept of collaboration. Under his leadership, the choirs have established relationships with numerous musical organizations throughout the state of Michigan. The choirs have collaborated with organizations such as the Battle Creek Symphony Orchestra, Haydn Festival Orchestra and Sacred Music Festival of Kalamazoo, and participate in a biannual performance of G.F. Handel’s “Messiah” with the Monroe Community Chorale and Symphony at the historic IHM Motherhouse Chapel. Case-Blanchard’s choirs have opened for such internationally known groups as Sweet Honey in the Rock and Take Six.

About the Principal Accompanist

Nancy D. Brown holds a Bachelor of Music from Western Michigan University with a double major in piano performance and composition. She is pianist, organist and choir director at Wakeshma Community Church. Brown is former director/accompanist for the Union City Community Chorale and currently accompanies the Kellogg Singers and Branch County Community Chorus of Kellogg Community College.

Brown was director of the Community Music School from 2001 to 2016 and currently works for the Gull Lake Partnership, helping to facilitate collaboration between area home-schooling families, community experts and Gull Lake Community Schools.