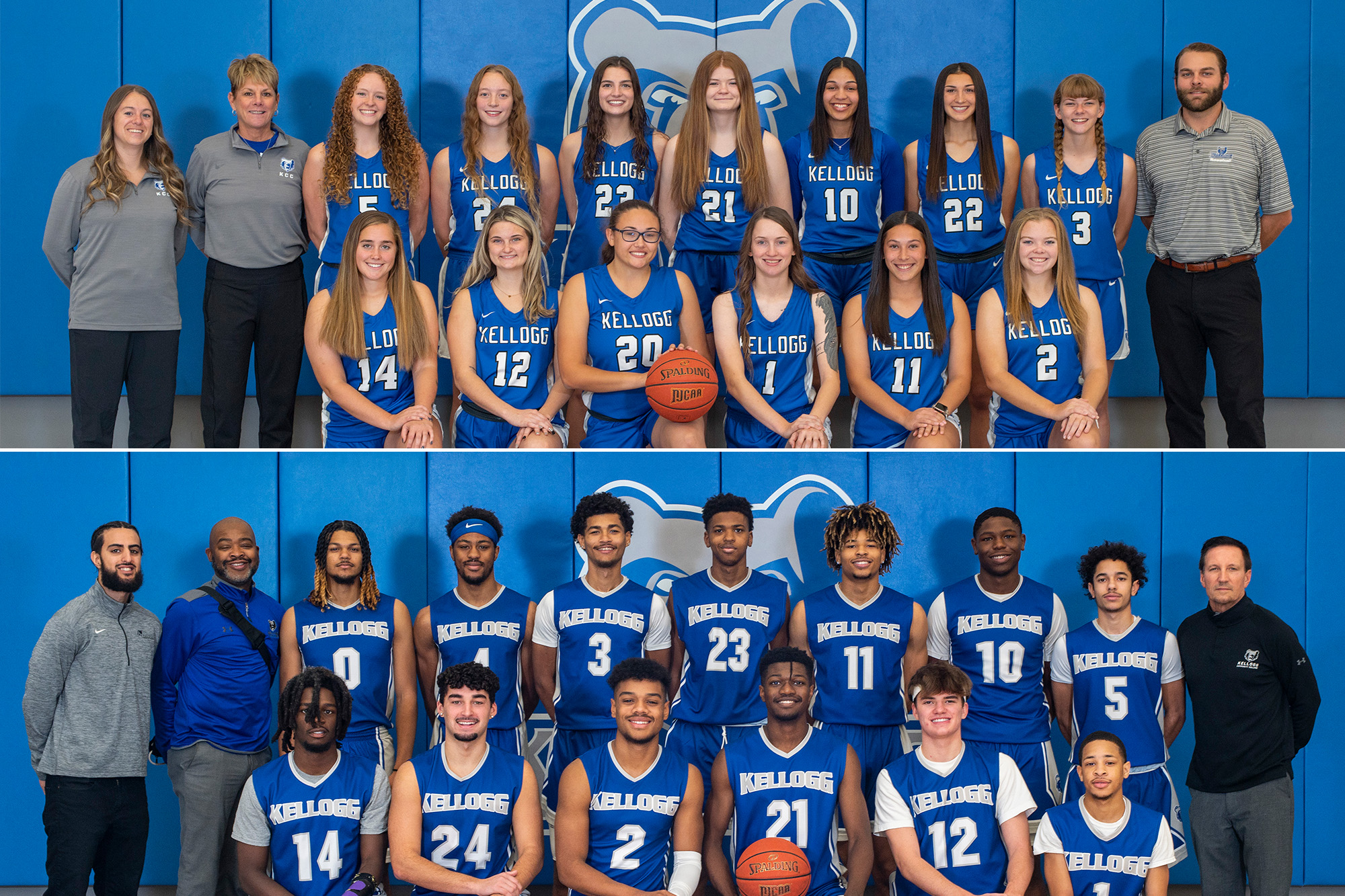 Both teams open their 2022-23 season at home against Detroit Community Christian College on Wednesday, Nov. 9, at the Miller Physical Education Building, on campus at 450 North Ave. in Battle Creek. The women’s team starts at 5:30 p.m. and the men’s team starts at 7:30 p.m.

For high-resolutions team and individual photos of each team available for download by fans and the press, visit our 2022-23 KCC Basketball Photos Dropbox at dropbox.com/sh/kqlwqe10milf2pb/AACWnqhjp5GvLjJSWiJlOh1Oa?dl=0.

The men’s basketball team opens the season this week with a schedule of 11 home games under the leadership of new Head Men’s Basketball Coach Steve Proefrock. The team boasts a strong roster of 13, including nine returning sophomores.

Among the returners is local sophomore standout guard/forward Brett White, of Battle Creek/Battle Creek Central, who averaged 22.9 points, 6.8 rebounds and 2.8 assists for the Bruins during the 2021-22 season last year.

New Head Coach Proefrock, having coached in KCC’s National Junior College Athletics Association as well as in all divisions of the NCAA, comes to the Bruins with a wealth of collegiate coaching experience.

Proefrock has earned more than 300 collegiate wins and has been a part of several championship teams. Most recently at the junior college level, Proefrock led teams to four conference championships, earning him several coaching honors including Junior College Coach of the Year from the Basketball Coaches Association of Michigan.

Proefrock is a professor of History and Physical Education at Glen Oaks Community College. He earned a master’s degree from Eastern Kentucky University and a bachelor’s degree from Central Michigan University.

For more information about men’s basketball at KCC, contact Coach Proefrock at mbbcoach@kellogg.edu or visit kelloggbruins.com/sports/mbkb.

New Head Coach Konkle is a Marshall native who played varsity basketball for four years at Marshall High School and returned to coach basketball, golf and softball at the school at various levels from 1995 through 2020. As the head girls basketball coach, her teams won 15 district titles, seven regional titles and one state championship.

Konkle graduated from Alma College in 1986 with a Bachelor of Science degree in Biology with a minor in Exercise Science. While at Alma she earned 12 varsity letters in four different sports, and following graduation earned her teaching degree.

For more information about women’s basketball at KCC, contact Coach Konkle at wbbcoach@kellogg.edu or visit kelloggbruins.com/sports/wbkb.