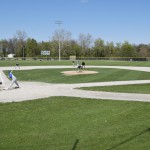 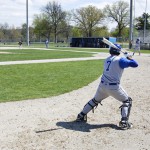 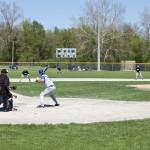 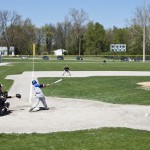 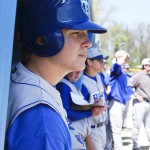 It’s no shock to head coach Eric Laskovy, who said this afternoon that “Our expectations are to be in first place and to finish there,” although with 10 league games left in the regular season he admits the team has a long way to go.

“We’ve gotta continue to play our best ball late in the season,” he said. “We gotta play consistent defense. Our Achilles’ heel has been too many errors.”

It’s sophomores like these who contribute to a team Laskovy said is likely even stronger than last year’s team, which won the National Junior College Athletic Association’s Region 12 Championship and finished fourth in the  NJCAA’s Division II World Series.

“A lot of the guys that contributed last year are returning this year,” Laskovy said. “Does that mean we’ll make it that far? Who knows?”

Whether the team charges on to post-season glory or not, they certainly have things to be proud of. The team averaged higher than a 3.0 GPA in the fall, for instance, and includes eight players who have signed on to play with four-year schools in the future.

“We’ve been very proud of these guys, regardless of what happens on the field,” Laskovy said.

Among the highlights from yesterday’s games, Laskovy noted the following:

In game two (5-4), freshman pitcher Bryan Stevens, of Portage, pitched for three and a third innings with no hits for the win in relief. Batting leaders included sophomore pitcher/infielder Seth Szafranski, of Coldwater, who hit two for three with a double and two RBI.

The Bruins play next against second-ranked Macomb Community College in an away double header beginning at 1 p.m. on Saturday, April 21, in what Kellogg Community College Athletic Director Tom Shaw called a “huge game towards Kellogg’s league championship run.”

The team’s next home game is a double header against Ancilla College that begins at 2 p.m. on Tuesday, April 24, at Bailey Park in Battle Creek.

For photos from a recent game against Kalamazoo Valley Community College — including the photos above — visit Kellogg Community College’s Facebook page at www.facebook.com/KelloggCommunityCollege/photos.