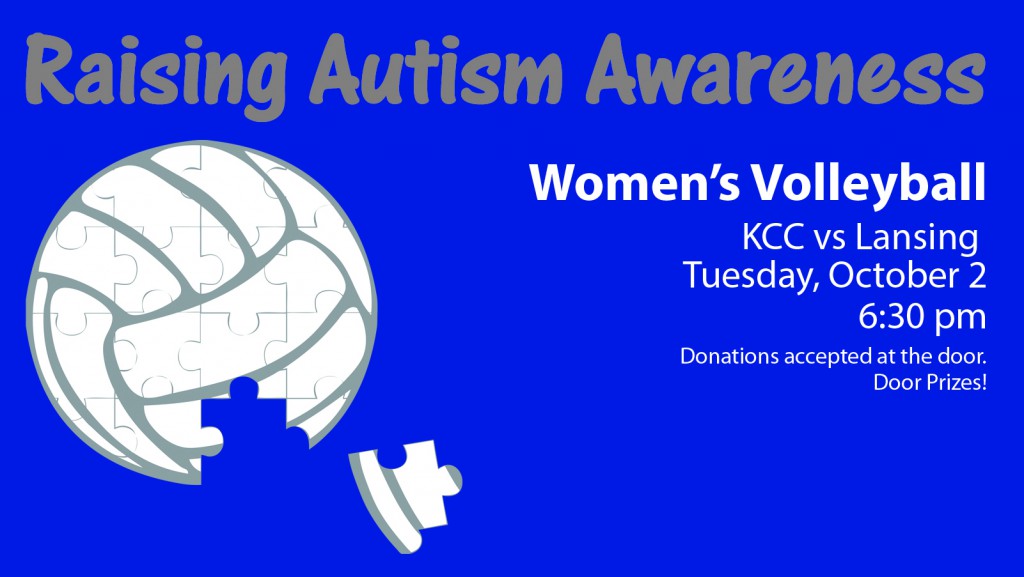 The Kellogg Community College women’s volleyball and soccer teams will play to raise awareness of autism and breast cancer in a pair of special home games that will include donations, door prizes and special uniforms.

Members of the volleyball team will wear special shirts promoting autism awareness during warm-ups before their Oct. 2 home game against Lansing Community College, which will begin at 6:30 p.m. The game will be held in the Miller Gymnasium on KCC’s North Avenue campus, where donations will be accepted at the door to benefit the Kalamazoo/Battle Creek Autism Society.

Amy Julien, head coach of the women’s volleyball team, said she chose to dedicate the game to autism awareness because special education is one of her passions.

“I have met some wonderful families who have shared with me some of the struggles they have faced with having an autistic child,” Julien said, noting that more children will be diagnosed with autism this year than with AIDS, diabetes and cancer combined. “Between doctor appointments, therapy sessions and after-school programs, the costs can be overwhelming.”

Members of the soccer team will wear pink socks and pink ribbons in their hair to promote breast cancer awareness during their Oct. 10 home game against Jackson Community College, which will begin at 4 p.m. The game will be held on the soccer field on KCC’s North Avenue campus, where donations will be taken at the gate to benefit Susan G. Komen for the Cure.

Sharon Powell, coordinator of the Miller Physical Education Building at KCC, said this is the third year that KCC has dedicated a game to raise awareness of breast cancer.

“Everybody probably knows someone who’s been touched by breast cancer,” Powell said. “This game is just to help people not forget that it is still an issue.”