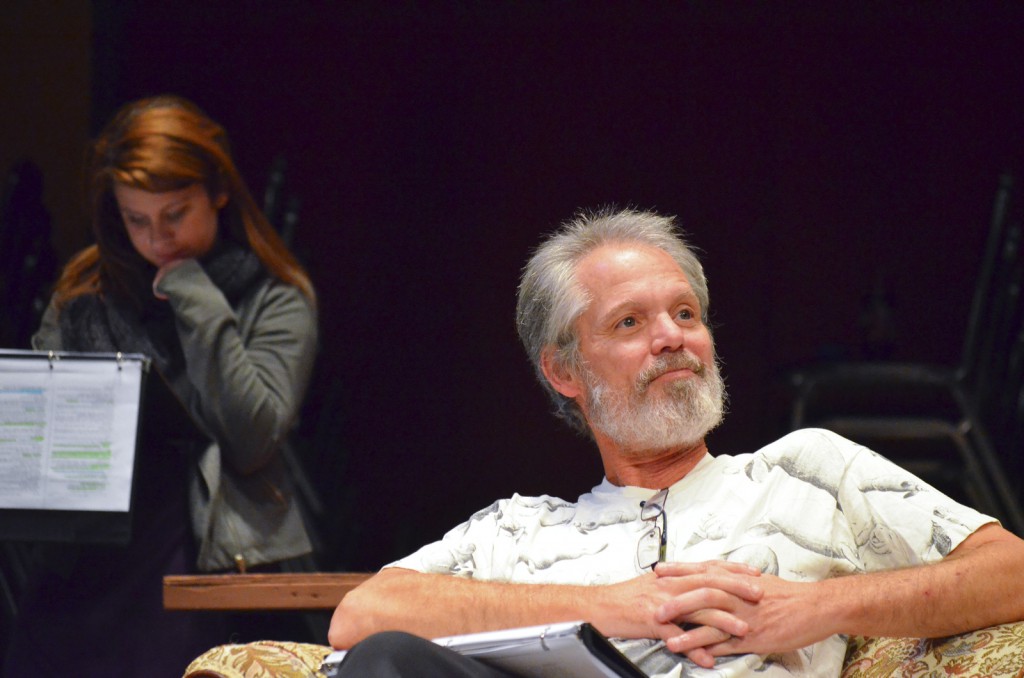 Gregg Morris will play the role of Major Metcalf in Kellogg Community College’s fall production of Agatha Christie’s classic murder-mystery “The Mousetrap,” which will run Oct. 18-21 in the Binda Theatre on KCC’s North Avenue campus.

Morris, 52, is a self-described audio book reader/market researcher/radio DJ/neighborhood rent-a-hubby and is also the keeper of a “kick ass snickerdoodle recipe.” (KCC theatre fans may recognize him from his role as the stiff in the college’s spring musical “Lucky Stiff” last semester.)

Below, Morris discusses his role in “The Mousetrap” in what is the second of our series of interviews with the cast, which we’ll be rolling out in the next few days leading up to opening night.

The KCC Daily: Tell us about your role. What drew you to your character?

Gregg Morris: He’s a retired military man with otherwise unknown qualities. In typical Agatha Christie fashion, there’s more to him than meets the eye. (But he’s NOT a “Transformer.” Promise.) And respectfully, I’m never really “drawn” to any specific character in any given show. I yield to the director to make that choice.

KCC: What are some of the roles you played in the past and how is your current role different or similar? Are there aspects of this role that are particularly challenging as compared to your previous roles?

GM: Someday I’ll fire up a list of the roles I’ve played since 1965. Someday. Just not today. Each play and character that has been notched into my belt have been utilized as “building blocks” for subsequent roles. Each and every show offers its own specific challenges for me. For “The Mousetrap,” it’s been primarily one of not constantly thinking about the fact that I have  T-shirts older than the median age of the cast.

GM: I always get excited performing for a live audience. (Dead ones don’t respond that well.) It’s those moments leading up to the initial audible reaction from the crowd (be it a chuckle or a gasp) that can be somewhat nerve-racking for a performer. It’s the challenge, the “jazz” (or what the French refer to as, “I don’t know”) that are the most gratifying for me. The ever so subtle changes that happen every performance based upon THAT particular night’s crowds’ responses make the entire process of putting a show together SO worth it.

GM: I’m a big fan of celluloid. Big. Huge. I mean it. Even as a wee small human I’d prefer watching movies over cartoons. It’s like Jon Anderson sang:

“Silent golden movies, talkies, Technicolor, long ago
My younger ways stand clearer, clearer than my footprints
Stardom greats I’ve followed closely … closer than the nearest heartbeat
Longer than expected … they were great
Oh love oh love just to see them
Acting on the silver screen, oh my
Clark Gable, Fairbanks, Maureen O’Sullivan
Fantasy would fill my life and I
Love fantasy so much …”

As a result, each performance of mine can be an amalgam of any number of characters from days gone by. “Major Metcalf” seems to be drawing from Michael Caine, Graham Chapman, David Niven and Estelle Winwood. (Well, maybe not a whole lot of Estelle.) In  theatre and in life, both God and the Devil are in the “details.” I might use a hand gesture I once saw Sean Connery do, a Leonard Nimoy eyebrow, a slow facial take a la Buster Keaton and a grunt Robert Shaw expressed all in one line. It’s not aping, per se, as much as an homage.

I’ve worked with and have seen actors do nothing more than literally imitate roles based upon a movie adaptation of the play that was being done and it makes me nauseous. An actor MUST incorporate a large SOMETHING of themselves into each role or else why bother?

With any theatergoing audience member it’s all about the “suspension of disbelief.” Patrons are plucking down passed away presidents to be pleasantly perplexed for a couple of hours. It’s up to us to make sure they’re getting their money’s worth by assisting in that suspension and by taking them on a little journey.

I’d encourage anyone coming to see this show to just relax. Once the lights go down just hold our hands. Don’t be afraid. We’re all in this together. Collectively, we’ll have a nice time. And I promise that we’ll keep the “victims” ON the stage.

For more information about the Theatre Program at Kellogg Community College, visit www.kellogg.edu/performart/theatre/index.html.