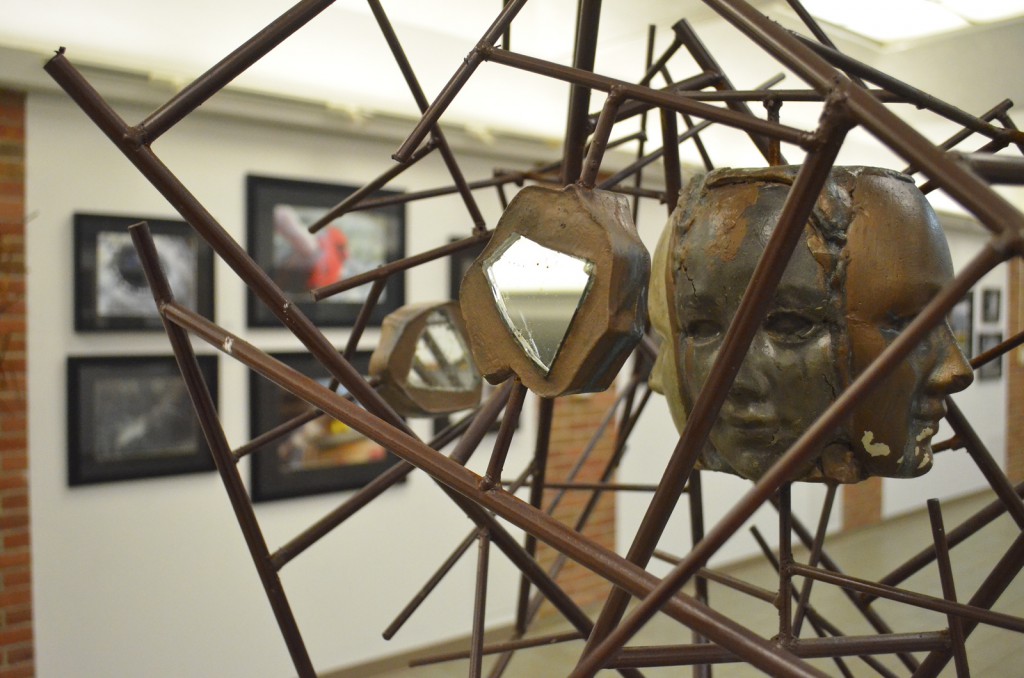 Of all the photographs that make up Vee Kalnins’ lastest exhibit, “The Way I See It,” Monroe-based artist Salina Hyder says she prefers the older images, though as Kalnins’ daughter she may be slightly biased.

They are, after all, images she’s grown up with.

“There’s a lot to look at,” Hyder says on a recent morning at  Kellogg Community College’s Davidson Center, where the exhibit will show through Nov. 12 in the Eleanor R. & Robert A. DeVries Gallery. The exhibit will officially kick off at the center with an opening reception from 4 to 6 p.m. Thursday, Oct. 18.

Hyder’s referring to a specific section of her father’s photos taken in San Francisco years ago, but she could just as easily be referring to the exhibit as a whole, which includes around 50 photos and a handful of sculptures, with the pieces spanning Kalnins’ artistic vision from the early 1960s to the present day.

Hyder nods toward a photograph titled “Pumpkin Lady,” and it takes a beat to realize that the subject of the image isn’t a gourd or a close-up of a trinket, but is actually an image of a woman’s nude torso painted to look like a jack-o-lantern.

“She’s always been one of my faves,” Hyder says.

Another of Kalnins’ candid photographs, this one titled “Violence in Chinatown,” at first glance is a well-composed shot of a crowd in black and white, but it’s actually something more: In the bottom left-hand corner of the image is a man, beaten on the ground and being ignored by passersby.

“When you look at something, it should strike you,” Kalnins says, standing among the photos in the gallery with his daughter. “I’m not looking at it from a technical point of view; I look at it more for appeal. Does it appeal to me?”

From the subjects of Kalnins’ photographs in this collection, it appears that what appeals to Kalnins runs a gamut as varied as the mediums he uses to capture it. The exhibit features images ranging from the candid street photography noted above to landscape views to macro shots of animals and plants, captured using everything from black and white film to digital and infrared photography.

A series of Kalnins’ photos of dissected milkweed pods is particularly striking. Starkly set against a black background and with some printed on canvas, the photos could easily be mistaken for paintings. A handful of the detailed presentations come complete with actual milkweed seeds under the glass of the images’ frames.

“If I take a picture of a flower,” Kalnins says. “I’m not interested in replicating exactly how the flower looks. I’m going to make it look how I want it to look.”

It’s an apt statement to make regarding a work from an exhibit titled “The Way I See It,” and it describes a level of control that’s also apparent in the other portion of the exhibit, which includes a handful of large sculptures located both inside and outside the Davidson Center.

There are stories inside these pieces as well, but while the photos tend to embody narratives for those willing to read them, something about the sculptures begs the viewer to provide their own.

When Kalnins suggests, perhaps jokingly, that one six-foot-tall piece crafted from steel, concrete and glass and titled, “Rejection by Four,” for instance, should be analyzed by a psychology class to find the deeper meaning, one can see what he means. The small mirrors situated at eye level catch your eye with your reflection from across the gallery and practically call out for you come closer to investigate the sculpture further. You can see yourself in the sculpture, literally and figuratively.

Kalnins – whose sculptural fountain, “Rhom-Petals,” was installed in the reflecting pool outside KCC’s Morris Learning Resource Center this past spring – said for years he focused mostly on constructing objects from steel, but he’s lately moved more into other mediums. His sculptures in “The Way I See It” are constructed using everything from steel to wire, wood, stone, glass and even Styrofoam.

“Each piece has its own reason,” Kalnins says when asked why he crafts a particular piece from a particular medium. He says people are already responding to the pieces he has outside the center, which are large geometrical steel shapes called “rhomboids” situated at the main door to the center and just outside the door to the courtyard, and are similar to shapes used in the “Rhom-Petals” sculpture.

The diverse shapes and materials of the sculptures add to a collection that can be inspected with interest both in part and as a whole, offering something for everyone with a little time to spare for art.

“The Way I See It: Sculpture and Photography by Vee Kalnins” is free and open to the public to view from 8 a.m. to 4:30 p.m. Mondays through Fridays through Nov. 12 in the Eleanor R. & Robert A. DeVries Gallery in Kellogg Community College’s Davidson Visual and Performing Arts Center, 450 North Ave., Battle Creek. All works of art in the exhibit are for sale by the artist.