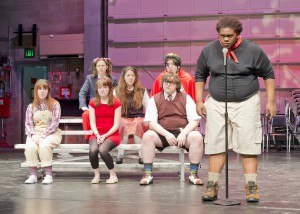 Below, Perry, a 19-year-old sophomore general studies major from Battle Creek, discusses his role in “Spelling Bee” in the first of our interviews with the cast, which we’re rolling out in the days leading up to opening night.

The KCC Daily: Tell us about your role. What kind of a person is he and in what ways is he different or similar to yourself?

DeQuan Perry, Jr.: I play the role of Charlito “Chip” Tolentino. I am 12 years old. In last year’s competition of the Spelling Bee, I (Chip) came out as the champion. In my head I believe, no, I KNOW that I am the winner and once again I will come out as champion. I may come off as snobby, but as a Boy Scout I am no such thing, I’m just a winner. Unfortunately for me, puberty isn’t exactly my friend at the moment. I fall into a very awkward situation when I spot a beautiful girl in the audience who goes by the name of Marigold Coneybear.

DP: My most current (past) role in a KCC production was as Vinnie DeRuzzio in the show “Lucky Stiff.” This character and Chip are two completely different characters and are also exactly the same. I don’t exactly see it as too much of a challenge but it is a different task to take on characters I never thought I would take on. A lot of my past characters have proven themselves to be either angry and stubborn. While in these shows I have to be scared, awkward, sad; these are attributes I’ve honestly never studied when creating my characters mentally because I never actually had to. I see this as my only issue but also as an opportunity to become that much more of a great actor/performer.

DP: My most exciting part would definitely have to be being able to run around the audience singing about an erection. This is not a normal thing to do, therefore making it that much more fun. I also get to throw candy at people; I’m pretty excited about that!

DP: When it comes down to getting mentally prepared for a role I have a few simple things flow through my mind. All of my past directors and teachers who have influenced me in my life to be a better actor and person. There are quotes they have said to me that flow through my brain that keep me content and calm as I go on. It also takes down the nervousness that flows throughout my body. My favorite quote that flows in my head was stated by Lane Gordon, a past teacher/director. “When on  stage, don’t lose touch with yourself. Keep him alive  as you live through with your other role. Don’t over do it, and find the medium.” These are words I cherish and will hold onto forever.

DP: This show holds a nice bit of language and adult content, so be prepared for anything, especially if you are bringing a child to see it. I also encourage people to practice their spelling and get ready. We will have four lucky volunteers get a chance to come up on stage and spell with us who will also have a chance at winning the show!

For more information about the Theater Program at Kellogg Community College, visit www.kellogg.edu/performart/theatre/index.html.