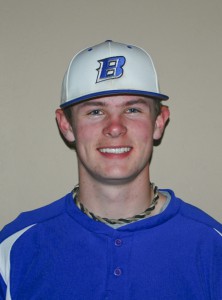 Cadis Chase of Manhattan, Mont., has signed a national letter of intent to play baseball at Kellogg Community College and will begin playing for the Bruins next season.

Eric Laskovy, head coach of KCC’s baseball team, called the senior first-baseman at Manhattan High School “an extremely driven student-athlete” who has maintained a 3.85 high school GPA and who also is a recipient of KCC’s prestigious Gold Key Scholarship.

“We are thrilled with the addition of Cadis to our baseball family,” Laskovy said. “I appreciate his intense passion for baseball and look forward to his strong work ethic and tremendous attitude. We expect him to be a key contributor as a freshman.”

The Bruins officially began their spring 2013 season on March 1 and have consistently ranked among the top 20 Division II teams in the nation in National Junior College Athletic Association polling. The team has had four top-10 finishes in the NJCAA – including a runner-up finish in 2007 – and six league championships in the past 12 years.

Off the field the Bruins have had a team-average GPA above 3.0 over the past six years, which places the team in the top 50 baseball teams out of more than 420 in the NJCAA academically each of those years. The team’s academic success was highlighted by a 3.18 GPA that placed them eighth in the nation in 2010.

For more information about the baseball program at KCC, contact head coach Eric Laskovy at 269-965-3931 ext. 2536 or at laskovye@kellogg.edu or visit www.kellogg.edu/athletics/baseball/index.html.