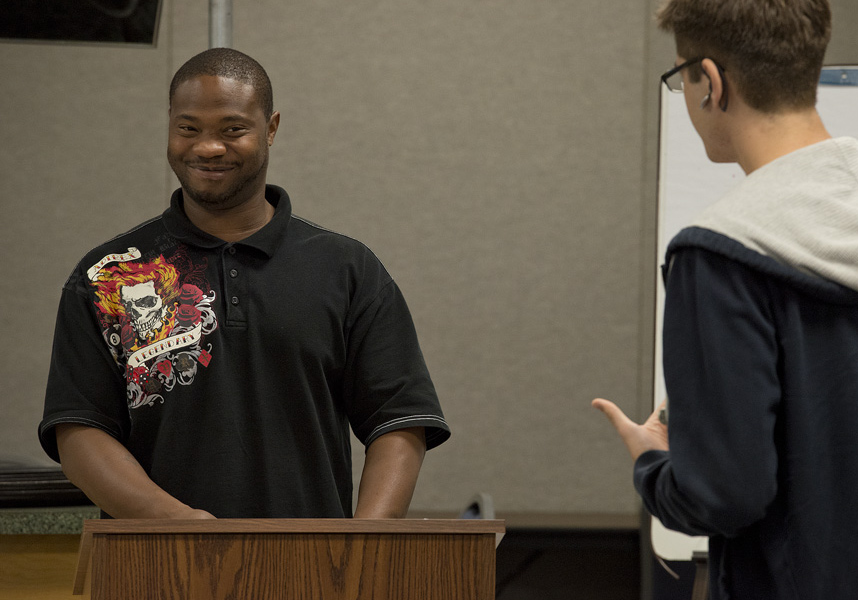 A young man tries sneaking a glass of alcohol into the pool area. An impatient woman in line behind a confused elderly man groans while looking at her watch. A family of four with a restless child demands extra attention.

These are just a few of the scenarios played out in a classroom set up as a hotel lobby at Kellogg Community College’s Regional Manufacturing Technology Center recently, where students in theater instructor Brad Poer’s Acting II class put future service workers to the test by acting out scenarios as difficult customers.

The workers are trainees in the PATH – Partnership. Accountability. Training. Hope. – program, managed by KCC’s Workforce Solutions Department in coordination with Michigan Works! and Davenport University to train individuals for jobs in the hospitality industry, specifically as cooks, servers or hotel front desk clerks.

Kimberlee Andrews-Bingham, training coordinator for Workforce Solutions at KCC, said the idea for role-playing with the theater students came about because the PATH group had events set up to get feedback on the culinary portion of their training but had nothing similar to test their customer service skills.

“They had to think on their feet and use the skills that we’ve spent all these weeks teaching them,” Andrews-Bingham said. “What better way to get a taste for what they’ll see when working on the job?”

Throughout, at random times, a telephone would ring and the trainees would have to keep their composure while answering the phone amid the confusion.

“It taught me how to keep my patience,” said Brittany Young, of Battle Creek, a PATH trainee who had to deal with several difficult “customers” during the class period. “I couldn’t say what I really wanted to say. I had to stop and think.”

Alexis Warren, of Battle Creek, another PATH trainee, agreed that the role-playing was helpful. As someone with experiences of her own trying to handle a child in a line in public, she appreciated being on the other side of the exchange during a scenario involving a family with a hyperactive boy.

The situation in this case was eased by having two receptionists at the front desk, allowing one to give attention to the child while the other dealt business with the parents.

“If it’s only one person there, it’s going to be a little more difficult,” Warren said, laughing.

Andrews-Bingham said the exercise was a helpful cap to the eight-week program, from which the trainees graduated last Friday. While the trainees were nervous to start, she said, afterwards they were all talking about what a great time they had.

“They got a lot out of it,” Andrews-Bingham said. “It made them realize that they do know what to do in a situation like that. I think it built their confidence.”

As PATH trainee Adrein Hall, of Albion, put it, “We did it here; now we know what to do in the future.”

Pictured above, PATH trainee Marcus Swinegan, left, reacts to a KCC theater student playing the role of a difficult hotel customer during a PATH session at the RMTC.