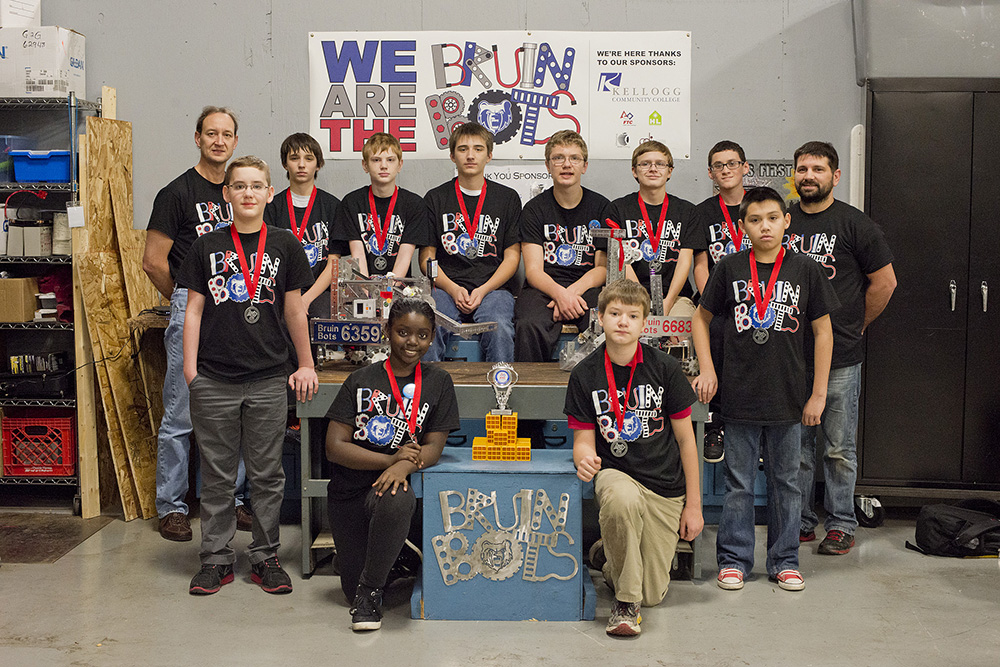 The team also was one of three finalists for the Connect Award, which recognizes team efforts related to connecting with their community and the engineering community at large.

Kim Andrews-Bingham, Bruin Bots coordinator and training coordinator for KCC’s Workforce Solutions Department, said the team impressed the judges, stepping up and showing they are becoming great leaders as well as great engineers.

“With such growth in the number of teams state-wide, the qualifying events have become increasingly competitive, but that did not stop the Bruin Bots from shining,” Andrews-Bingham said. “They built a great bot that was able to score points and take them all the way to the final match of the tournament.”

The FTC tournament – one of six qualifying tournaments held statewide to determine finalists for the state competition – included 21 teams which created and controlled robots to compete with other teams to complete various tasks. These included projects like picking up blocks and putting them in specific locations, raising a flag and having the robot pick itself up chin-up style on a horizontal bar.

Sanye Sichinga, an 11-year-old Bruin Bots participant and seventh grader from Springfield Middle School, said it was “kind of a heartbreaker” to lose in the final match, but that the team persevered through the disappointment.

“We were all nervous, excited and happy,” she said. “It was kind of like a rush of adrenaline.”

Robb Cohoon, the Bruin Bots’ head coach and an adjunct instructor at KCC, said he’s seen the kids in the program grow since the season began in September and that the experience will help launch them toward great things in the future.

“Some of them come with the experience of having been part of a sports or other team, but many don’t; some students that were shy and unsure have really become team leaders now,” Cohoon said. “It is amazing to see them not only learning things like how to use math and other STEM skills in the real world, but also how to work together to set goals and achieve them and build self-confidence in the process.”

This fall marked the second season of Bruin Bots programming at KCC. The team includes sixth through ninth graders from Calhoun County who together build and program competition robots as part of the College’s Regional Manufacturing Technology Center (RMTC) programming.

For more information about the Bruin Bots or to hear about related youth robotics programming coming to the RMTC this spring, contact Andrews-Bingham at 269-565-2802.