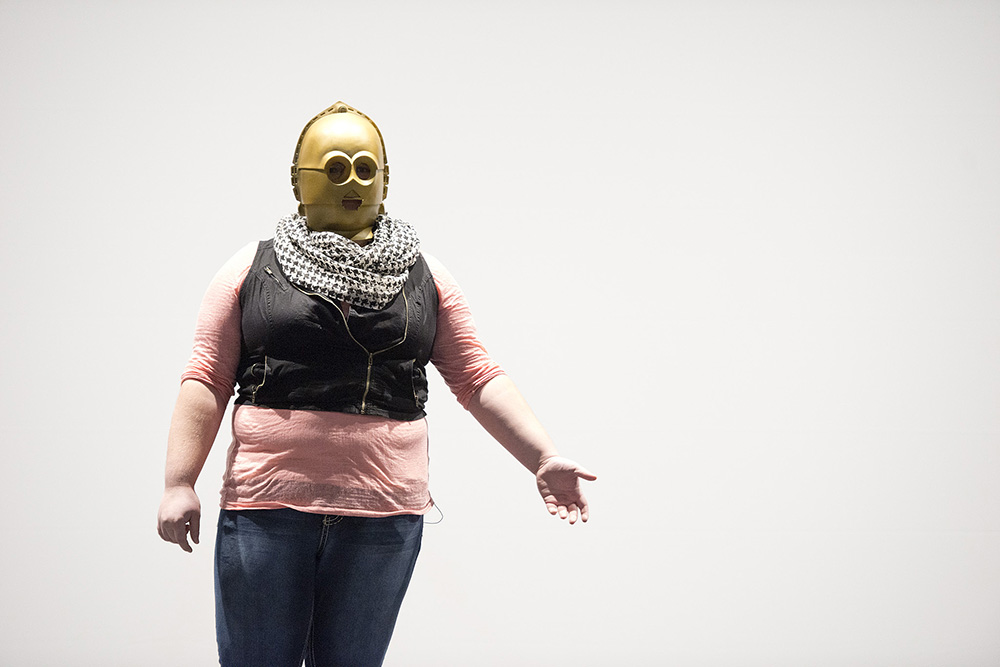 *Editor’s note: Below is the first in a series of interviews with the cast of Kellogg Community College Theatre’s “Sampled Shakespeare.” The show, which opened last weekend and shows at 7:30 p.m. this Friday and Saturday and at 3 p.m. Sunday, includes scenes from the original “Star Wars” movies and “The Big Lebowski” set in Elizabethan English.

Danielle Cavinder, of Battle Creek, is a 19-year-old general education student at KCC who plans to transfer to Kendall College of Art and Design’s Fashion Studies program next fall.

For now, she’s a cake decorator by day and plays C-3PO in KCC Theatre’s current run of “Sampled Shakespeare,” for which she also serves as the costume designer.

We caught up with Cavinder to ask her about her role in the production.

CAVINDER: C-3PO is a dorky sidekick who tends to worry, which on occasion can describe me. Growing up I was always the friend that said, “Guys, I don’t think this is a good idea,” so C-3PO is a good fit for me. I find this production so interesting because it is a production in both modern and Shakespearean roots. To have two time periods fused together is like creating a new universe, and to learn to work and live in that environment is a fascinating process, especially among my newly found posse of theatre geeks.

CAVINDER: Previous to this production I had seen only nuggets of the original “Star Wars” movies and I had never even heard of “The Big Lebowski.” Upon receiving my role as C-3PO and costume designer I felt that it was necessary to immerse myself, specifically in the world of “Star Wars.” Now having watched a majority of the “Star Wars” episodes I can definitely say that I have crossed over to the Dark Side and joined the fandom that is “Star Wars.”

CAVINDER: My previous roles comparatively only have two things in common: comedic relief and sidekick. I have been a tap dancing horse, a knitting sheep, a British traveler lady with an enormous rump, an obnoxious lounge singer and a few others in various productions that I have participated in. Overall, I would say that my previous roles have been more human- or animal-based, but I am excited to play a droid.

CAVINDER: Some of my lines get a little tricky when we are mixing droid, Elizabethan English and “Star Wars” terminology.

CAVINDER: This production is about mimicking the “Star Wars” movies but with a twist, so I have really been working on staying true to C-3PO. But overall I have been influenced by my directors and various actors. I think that it is best to take small pieces from many actors to create my personal vision rather than recreate another Jim Carrey or Idina Menzel.

CAVINDER: Brush up on your “Star Wars” and “Big Lebowski,” then come and enjoy a good old nerdy time with your friends and family. Also, one does not need to be of nerd status to attend this production.