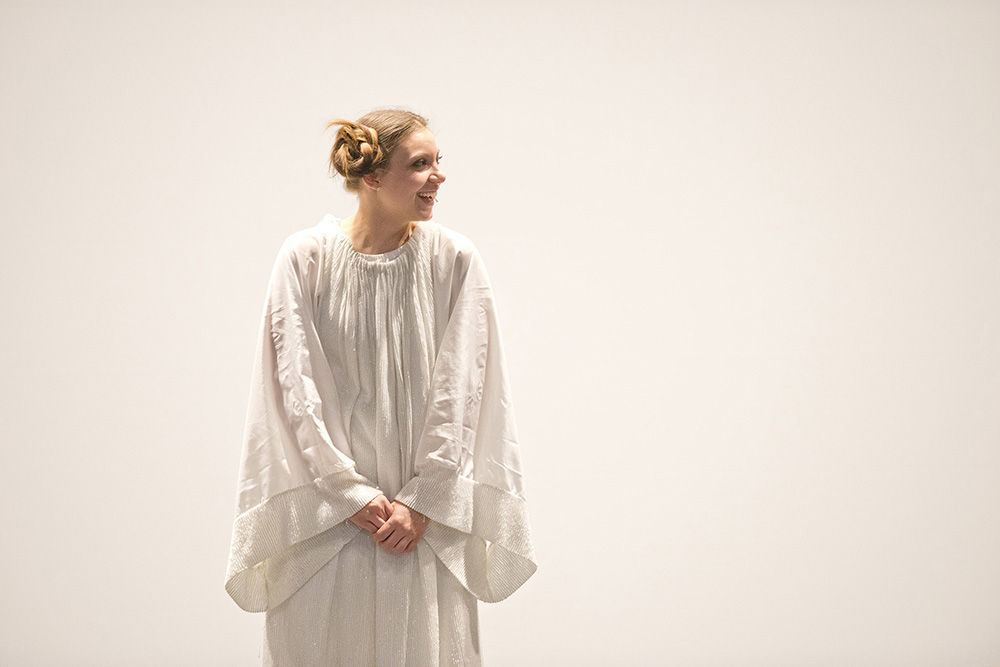 *Editor’s note: Below is the fifth in a series of interviews with the cast and crew of Kellogg Community College Theatre’s “Sampled Shakespeare.” The show, which opened last weekend and shows at 7:30 p.m. this Friday and Saturday and at 3 p.m. Sunday, includes scenes from the original “Star Wars” movies and “The Big Lebowski” set in Elizabethan English.

We caught up with Shore to ask her about her role in the production.

SHORE: Well, I play Princess Leia. She is fearless and stands up for herself against the people she knows are more powerful than she. Leia is a take charge, take no crap from anyone, butt-kicking gal. (Director) Brad Poer actually appointed me to be Leia for this production, but I wanted to be her anyway, so it worked out!

SHORE: I have to admit I was not at all familiar with “The Big Lebowski.” “Star Wars,” on the other hand, I have seen many, many times. I am a fan of the films, and though I have my new doubts about the new movie coming out, I’m anxious to see it and how it turns out. I studied Shakespeare in my high school English class so I am fairly familiar with his works; I never thought to combine Shakespeare with “Star Wars” — or any other current type film — but I’m very excited to bring them together for this production.

SHORE: In the past I have mainly been an extra on some major films and smaller roles in plays done in elementary and high school; the high school’s theatrical productions were mainly musicals and I am not musically inclined — not without training — so I stuck to background roles. To be one of the leads is a new step for me and I have to say I cannot wait to bring to the table what I eventually want to do in life.

SHORE: It’s bittersweet to have one of the “main” roles (I put that in quotes because every role in this production is crucial in making it a success) because it is both nerve-racking and exciting all at the same time. Especially because some people are not familiar with the works, it just brings a whole new twist on it all, to both entertain the audience as well as somewhat educate them.

SHORE: I sort of motivate myself when it comes to acting, but the people who tell me “it’s too hard to break into the industry” or “you’ll never make it” motivate me into pushing myself harder because it is a tough career to get into. My family and close friends, however, are encouragers and help me run lines and some even send me roles they think I may be interested in.

They should know first that it is Shakespeare, don’t ignore that headline, but it’s not an overwhelming experience due to the fact that it is tied with “Star Wars” and “The Big Lebowski.” Most are familiar with one or the other in the least, so to tie Shakespeare to a familiar role or film makes it easier to understand and follow. The other thing to prepare for is to be entertained and to laugh; as there are some different twists to this production because it is a theatre production and not a film, we can’t actually blow up a Death Star no matter how awesome it would be. And lastly, I hope the audience enjoys the show!