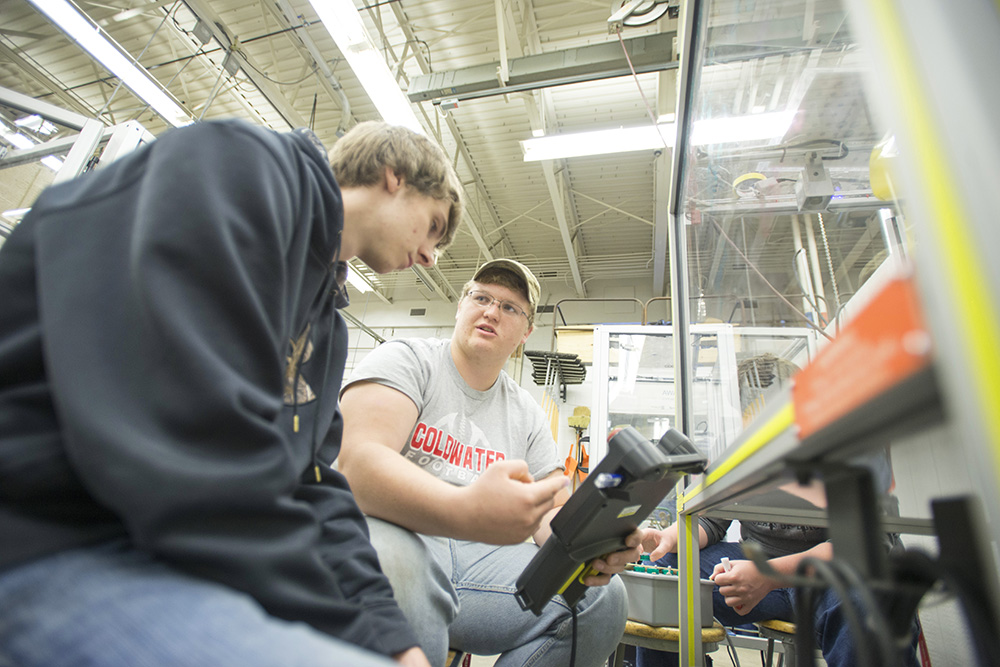 It’s a rainy Thursday morning in Coldwater, and a trio of high school seniors inside the Branch Area Careers Center huddles around a large plexiglass box. Kyle Myers, of Reading High School, holds a tablet-sized controller as Nick Pierucki, of Coldwater High, points at the screen, giving instructions. Mason Whitney, of Quincy High School, looks on.

While their peers are in classrooms at their respective high schools taking tests and doing bookwork, the three BACC students are getting valuable hands-on experience for their future careers, programming a robot. They’re programming this one – a waist-high, bright yellow Fanuc 200iD/4S short-arm robot – to play tic-tac-toe.

The robot is similar to one of a half dozen installed at the center via a state grant last year that provided more than a million dollars in new equipment for use by BACC and Kellogg Community College robotics and industrial technology/mechatronics students.

Myers says he wants to go into industrial maintenance, working in both electrical and robotics maintenance as a career, and that the experience he’s had working with the equipment at the BACC has been valuable.

Pierucki, who wants to be an electrical engineer, feels similar.

The new equipment at the BACC, which includes several industrial electronics and wiring trainers in addition to the new robots, was purchased and installed over the course of the past year through Community College Skilled Trades Equipment Program (CCSTEP) funds granted to KCC to make student and worker training in the communities the College serves quicker and more comprehensive and efficient. KCC operates its Grahl Center regional campus next door to the BACC, and offers training in industrial electricity/electronics, machining technology, maintenance and robotics at the center.

Ben Miller, manager of the BACC Robotics Program, says the center didn’t have a robotics program before the new equipment was installed. With KCC’s CCSTEP funds, the center was able to partner with the College to add the robotics element as an extension to its other programming for students interested in fields like mechanical or electrical engineering.

Electric automation students at the center incorporate input/output programming that teaches the robots how to react when they receive certain signals, Miller says, gesturing toward students wiring I/O switch boxes in a space adjacent to the robotics area. CAD students can design end-of-arm tooling or parts to pick up, while welders learn how to use the robots for robotic welding.

“It opens it up; students can have a lot more access to the technology and the automation side,” Miller says. “We get a good mix of future engineers.”

The BACC primarily serves high schoolers during the day, and high school robotics program graduates at the center will leave with a Fanuc Material Handling Certification they can use to “jump right onto a robot” in the workforce, Miller says. The BACC sees adult ed students from KCC in the evenings.

“The students that come in for that program are usually coming from industry, and out in their factory they might have a robot and not know how to use it, or might have very minimal training in how to operate and modify programs, and so we get those students in here and they’re able to take what they know and then just build on it,” Miller says. “I’ve had students who I’ve shown very, very small processes, and they’ll go back and they’ll send me a video and say, hey, look what I can do now. It’s just amazing to see the growth.”

Several pieces of equipment available at the BACC are mirrored at KCC’s Regional Manufacturing Technology Center in Battle Creek, where Tom Longman, director of the RMTC, explains the value of the growing field of robotics.

“Robots do things that people might not want to do,” Longman says. “Repetitive tasks or things that are dangerous that we don’t want to subject people to, or movements someone might have a hard time doing.”

Tasks like these might involve picking up hot die casts out of molds and putting them in a quench tank for cooling, trimming metal or categorizing bulk parts, he says. Robots can assemble, weld and inspect materials through vision systems that detect color, shape and size.

Training on such robots offered at KCC and incorporated into several of the College’s Industrial Trades programs can help students become robotics technicians or industrial maintenance technicians or mechanics, working in a variety of environments ranging from kitchens to the ocean.

“It’s exciting work, it’s interesting work, it’s cutting edge,” Longman says, pointing out an RC8 robot used to train Denso employees at the center. “It’s so broad and diverse the things they can do.”

“It’s the future; we’re just at the beginning of it,” Cohoon says, emphasizing the need for skilled workers to receive robotics training if they’re worried about the potential for displacement as automation expands. Skilled workers are needed to build, maintain and fix the robots, Cohoon says, and to program them to do the tasks that make them so valuable.

“Some plants have two robots, some have 200,” Longman adds, “and someone has to take care of those.”

The state’s CCSTEP funds provided more than $178,000 worth of robotics equipment and more than $732,000 worth of additional industrial technology/mechatronics equipment for KCC and BACC programming at the BACC. A 25 percent match of $44,512 from the BACC and KCC for the robotics portion and $183,028 from KCC, the Branch County Intermediate School District, the Michigan Department of Agriculture and Rural Development, and the Workforce Development Agency brought the total investment in new equipment to more than $1.1 million.

The latter matching funds were batched through Community Block Grant funds provided to Clemens Food Group, which is building a 600,000-square-foot processing facility in Coldwater that will create an estimated 830 jobs within the next few years. KCC and the BACC are partnering with the facility to offer a series of robotics and mechatronics courses this fall designed to train students on the expertise and equipment needed for employment at Clemens when it begins operations in late 2017.

KCC is hosting sign-up events in late June and early July for students interested in such training to complete an application, fill out financial aid forms and meet with instructors to map out a course plan. For more information or to RSVP, contact KCC staff at grahl@kellogg.edu or 517-278-3300. The sign-up events will be held from 9 a.m. to noon Wednesday, June 29, and from 5 to 8 p.m. Wednesday, July 6, at KCC’s Grahl Center, located at 125 Seeley St. in Coldwater.

Pictured in the above photo, Kyle Myers, of Reading High School, looks on at the BACC as Nick Pierucki, of Coldwater High, points at the screen of a tablet-sized robotics controller, giving instructions.