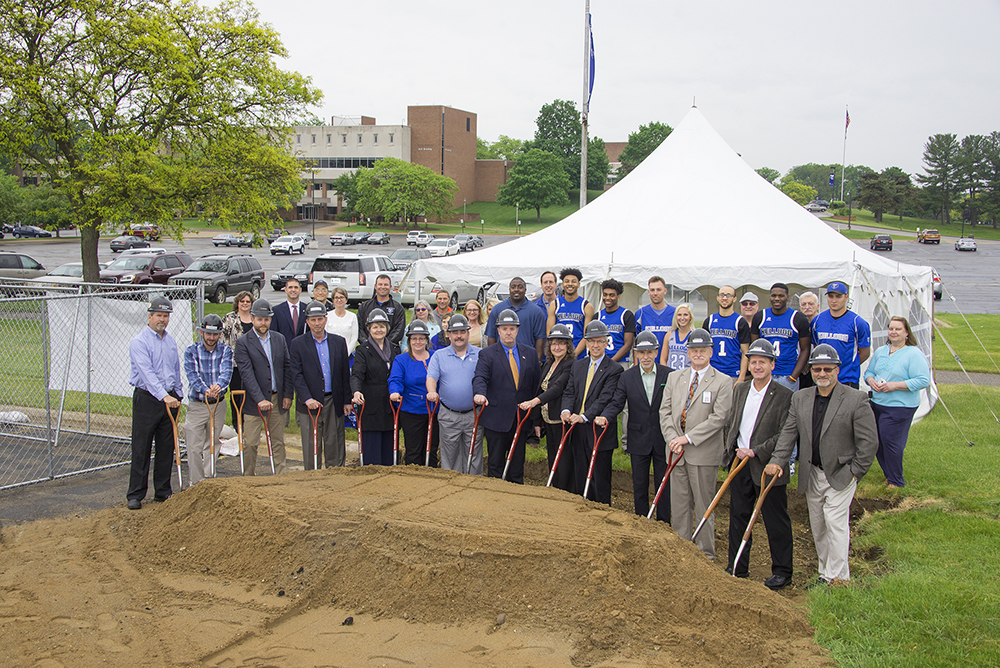 Representatives from Kellogg Community College and the Miller Foundation broke ground today at the construction site of the new Miller Physical Education Building on the College’s North Avenue campus in Battle Creek.

When it opens in 2018, the new Miller Building will be the modernized home of KCC Athletics and Physical Education programming, both of which have been a vital part of the College for decades. The new building will have dedicated space for the College’s physical education curriculum, a bigger weight and workout room, a bigger gymnasium, dedicated space for KCC Police Academy fitness training, more efficient heating and cooling systems and other modern amenities. The building also will host the home games for KCC basketball and volleyball teams.

KCC President Mark O’Connell said the new facility will create opportunities for facility efficiency and programming flexibility. The new structure is designed to serve the College’s needs for decades to come.

“Our instructors, students, athletes, coaches and community members enjoyed much success in the old facility, and we’re expecting that tradition of excellence to continue when the new Miller Building opens in 2018,” O’Connell said. “We are extremely grateful for the taxpayers and our community partners who have supported the College over the years and helped us keep our campus beautiful and high-functioning.”

After reviewing multiple design options over the past two years, KCC determined that a replacement, rather than renovation, was the most cost-effective solution for updating the Miller Building. KCC will pay for the estimated $10 million project with revenue from a capital millage approved by voters in 2012.

In December 2016, KCC permanently closed the former Miller Building – which had been built in 1966 thanks largely to the financial support of the Albert L. and Louise B. Miller Foundation – so that the College could proceed with demolition and replacement of the facility. The new Miller Building is currently under construction on the same location on campus near the College’s soccer field and tennis courts.

The old Miller Building contained a time capsule which had been placed in a cornerstone in 1966 by late newspaper publisher Robert Miller, who was president of the Miller Foundation. KCC officials retrieved the time capsule and reviewed its contents last fall; the original capsule, along with a newer version with more recent artifacts, will be preserved and placed inside the new facility next year.

For the duration of the construction period, employees and students associated with KCC athletic teams and physical education courses have been temporarily relocated. Men’s and women’s basketball and women’s volleyball home games will be played at the Battle Creek Central Fieldhouse, 162 Champion St., Battle Creek. Physical education classes will be held at the Battle Creek YMCA Multi-Sports Center, 182 Capital Ave. NE, Battle Creek. Women’s softball and men’s baseball will continue to play their home games at Bailey Park, 1392 Capital Ave. NE, Battle Creek, as they have for many years.