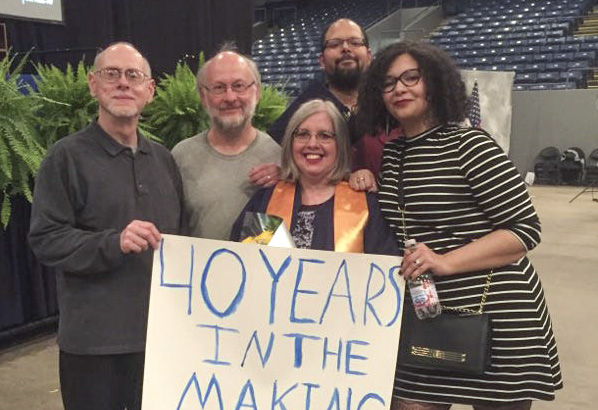 Kellogg Community College alumna Bernadette Heldt took her first accounting class at KCC in 1977. Last month, after pursuing a degree 40 years in the making, she graduated from KCC with an Associate in Applied Science degree in Accounting.

As a young adult, Heldt initially planned on majoring in accounting, but she wanted to move out on her own and thought she could get a full-time job as a secretary quicker than she could finish a bachelor’s degree in the field, which was her goal at the time. She initially graduated from KCC in 1980 with a secretarial certificate.

“I chose to study at KCC because it was convenient for me,” Heldt says. “I had been accepted to Western Michigan University, but I thought I would study two years at KCC, then transfer to WMU. Of course, things don’t always work out as we plan.”

Through the 1980s, Heldt worked as a receptionist and at one point moved to Grand Rapids, where she worked as an accounts payable clerk, both positions where she took on some accounting tasks. She also took more classes in accounting and business at KCC, and after having two kids returned to Battle Creek and decided to study computer programming at KCC. She earned an associate degree in electronic data processing in 1988 and another in computer programming in 1989.

Through the 1990s, Heldt took another path – “My life and career have taken some twists and turns,” she says – working as an assistant teacher with Head Start and returning to KCC again to study child development and elementary education. By the mid 1990s she was working as director of an after-school program, where she started a summer-care program for children, but in 2001 accounting came calling again and she left her work in child care.

Working as an accounting assistant in Battle Creek and raising two children on her own, Heldt knew she wanted to go back to school to finish her accounting degree but didn’t have the time or the resources till 2012, when she was able to begin taking advantage of professional development funds offered by her employer to continue her education. Today she works as the Accounting & Benefits Specialist at Region 3B Area Agency on Aging/CareWell Services Southwest, where she processes payroll, accounts payable and employee benefits.

“I really enjoy my job and the people I work with,” she says. “I wanted the degree for personal fulfillment and was lucky that my employer helped me to pay for my last few classes that time.”

And even after 40 years, Heldt isn’t done with college. She says plans to take a year off from school then begin work on that bachelor’s degree.

“It will take me several years to accomplish, but I’m looking forward to the challenge,” Heldt says. “KCC has been a part of my life for 40 years, and I appreciate being able to continue my education during that time.”

Pictured in the above photo, courtesy of Bernadette Heldt, are, left to right, brothers Roger and Steve Heldt, Bernadette Heldt and her children, Tim and Rachel McKnight.